It was morning on day three of the holiday, with Dad still determined that we could get up onto the Malverns from our cottage.  Problem was, it was a foggy morning and although we finally did get high up, the promised 'breathtaking' views in the guide book just didn't materialise.  Atmospheric though .....

After consoling ourselves with mushroom soup and an afternoon's relaxing, the question on everyone's lips was "which pubs are we ticking off before tea time?"  Or was that just me?

After about a twenty minute car journey, we arrived in my first Worcestershire pub tick since 2007 ..... 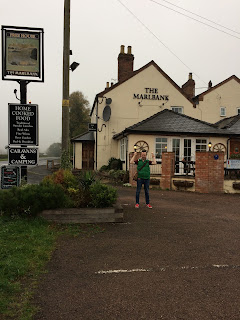 Here's a tip for you - never read a GBG entry before visiting a pub, you'll only be disappointed.  The description here made it sound like some Happy Harvester with a kiddies play area when in truth, despite the roadside location and the fact it was quite a large building, it was a homely as they come.  Basic too, and the now typical holiday combo of a humourous old landlord and an even more amusing local (Eric, the most popular man in the pub) greeted us, with a quick fire Q&A session which I had to be on my toes to field.  "What beer style do ya like?"  "Do ya want a straight glass or handled mug?"  "Did you know I don't drink and I don't smoke .... I used to chase all the girls, but now they can just walk away from me?"  Well, me and Mum chuckled but Dad had already started eyeing up a piece of furniture he seemed determined to shove in the boot of the car when no-one was looking.  We'd timed our arrival well, it soon filled up.  Most notable was an emotional woman, who acted like she'd been abroad for a year, going around the whole pub (apart from us) hugging everyone at random, tears almost in her eyes when she pounced on poor Eric.  From what i gathered, she'd been away for two whole weeks.  We sat in a cubby hole to the right of the bar, I thoroughly enjoyed my Battledown Original as much as any ale this holiday (Simey Beer Score - B+), and Mum came up with a great idea to make GBG cross ticking easier - get a stamp made up so I can just go "bang, bang. bang!"  Bye bye green highlighter, well at least for those tricky two weeks in early September.  And then use the highlighter for THAT year's ticks.  It's all in the detail.  Great pub.


Our second pub was back down the road we came from, and just off into a little village not at all far from where we were staying.  It didn't open til 6pm because it was obviously trying to prove it had micropub credentials (I'm joking) so we lurked in the carpark til exactly 6 with a vintage fire engine providing the entertainment.  The pub looked promising too: 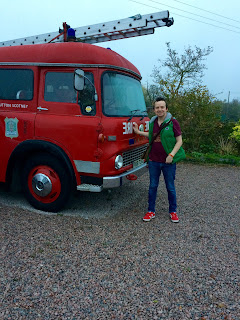 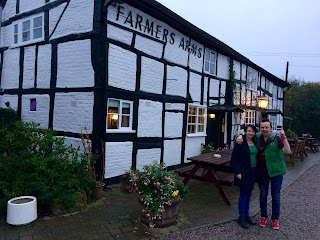 Once open, an ancient wheezing landlord who walked at 0.01 mph smiled at us with all the effort he could muster and pulled us some standard Hook Norton ale (SBS B) and we went to sit on the left of this absolutely incredible low roofed timber beamed inglenooked fireplaced pub, which felt every bit as old as it's supposed 1480 date.  At 6:02pm, a man who looked almost as old as the landlord came in, looked very hurt at our presence (it was the first time since 1975 he hadn't been the first customer in) and tried to order a pint of Hooky but no words escaped from his lips such was his shock.  We sat to the left, Dad hit his head on a bell, which was actually protecting him from hitting it on the wooden beams, me and Mum laughed cos we are cruel, the landlord chuckled in a "everyone has done that since 1st Jan 1480 but it's still totes LOLZ babe" kinda way.  I am sure that is what he was thinking.   I didn't make any notes, just sat contently loving the place and it actually wasn't far off my imagining of the perfect pub.  For those who think rural pubs need restaurants, fine dining, twildren and twogs etc. to bring them "up to date for the 21st century", they need locking in here for a session.  Quality speaks for itself, and in a week of high class pubs, this was perhaps the best example. 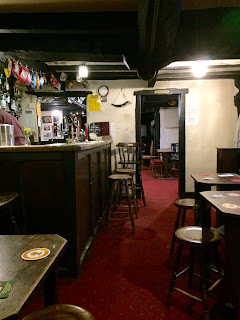 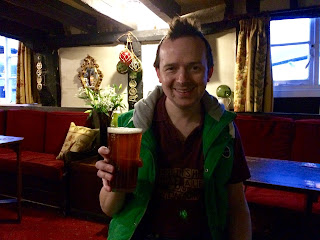 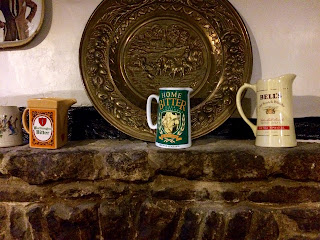 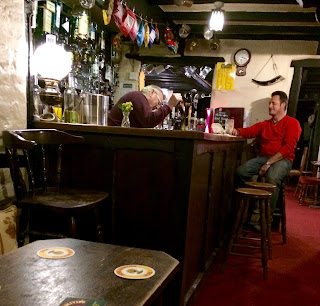 If the weather had seemed miserable on day three, then we should've been careful what we wished for on day 4 as it absolutely bucketed down ALL DAY.  Walking on top of the Malverns suddenly didn't seem like such a great idea, so instead we went to the town of Malvern itself for a "town walk", which involved a lovely church but then a walk up 99 steps to find a 'wellspring of death' (or something) which didn't actually seem to exist!  My phone still has water in it now, and was a bit of a low point of the holiday.  I wasn't fussed re Malvern pubs as the place has a railway/train station.  But I did have a couple of 'harder to reach' ones in mind.  Things soon looked up:

Whilst Dad went to park the car in this hilly misty little part of the Malverns, me and Mum trudged inside, past a couple of pool tables (which obviously stands for quality in Worcs) where a young dude who reminded me of an angelic Johnny Rotten served me a pint of something Cotleigh (SBS B-) and two tiny cups of coffee for the parents with a complimentary mint (which we'll come back to).  I spied a witch near the pool tables, so had a photo opportunity despite my soggy demeanour.  The pub even had Robinson's cider on, though possibly not from Stockport though with ales from Tring and Devon, who knows?  Even a session under the hand dryers couldn't dry me off, so it says something for the no frills supremely relaxed atmosphere about this pub that it was perhaps my second favourite of the holiday after Birtsmorton.  Yes, we were obviously tourists, but none of the North Yorkshire toffee nosed snooty attitude, simple and friendly.  It had signs like "sod the dog, beware of the Stafford Rangers fan", something you just don't see in every pub!  Dad dropped the remaining 1/100th of his mint on the floor, and then spent the next 5 minutes under the table searching for it.  Had he not been properly fed this holiday?  Still, laughing at Dad in a pub was becoming a fun theme for me and Mum.  Two men walked in with a wet dog, friendly in a theatrical way with their "weather" based humour.  I had to drink up and leave, otherwise they'd have boxed us in for an afternoon long chat.  Nice though.  The dog smelt horrid enough to make it the first twog of the week even if it was cute.  On the way out, we dodge two threatening oiks playing pool, but they were actually friendly too, if that was Donny, I'd have been speared with a cue.

Later that evening, we set out in search of my final "must do" pub, the Alma Inn in Linton cos it has no bus or train symbol in the GBG, signifying it's difficulty to get to.  However, a road closure put paid to our plans.  Dad, somewhat unfairly, seemed to blame the pub - "it'll be out of the Guide next year, you mark my words, and gud bluddy riddance to it!"

I had to think on my feet and with the heritage pub called Three Kings not due to open for another 45 mins, I took us back towards Malvern ......

It was dark, wet and visibility was poor, I almost felt guilty, but that sense of anticipation I always get before a rural BRAPA bonus outweighed any negative emotions .....

Yes, so the view you see in the top photo is actually the "best pub view in England 2005" which makes you wonder what went wrong before the 2006 voting took place.  The pub itself was another surprisingly basic one roomed affair, with a farmhousey feel and though we could see a kitchen and chefs through a window, it didn't feel a foodie enough place to eat, which we had been vaguely thinking about.  The young barman was practically mute, and glared throughout in a "I'm psyching you out, BRAPA" kind of way.   Mum and Dad claimed he was disinterested, but I reckon  there was a lot going on behind those eyes.  He reminded me of the Grange Hill school bully in the mid 80's that they weren't brave enough to cast, probably cos he stole Phil Redmond's dinner money.  The Malvern Hills Ales 'Bertie's Best' was superb (SBS B+) though not before Mum had shown her pubby inexperience by sitting on the far side near a loud 'baby' gang when there was a perfectly good seat by the fire, albeit 'twixt scary barman and even scarier local, perhaps the most Worcestershire pub man ever, who fell asleep, and then finally left.  The 'baby' was upgraded to 'Twaby' status after some intense howling, but I was about to praise the thoroughly irritating Mum on 'walking it around the pub' to try and calm it down, but all she was actually doing was Skyping her friend with twaby in the other hand.  "Bad pub etiquette, that's what it is!" I raged to Mum and Dad, and for a second, the Grange Hill bully looked up, almost in admiration of my rant, but then remembered he hated me.  Time to leave as it felt like we could get stranded here overnight, and that would be scary!  Great pub nonetheless.

It was back 'home' for tea and an episode of Hamish MacBeth as I'd stupidly only brought one disc of Monarch of the Glen, but with Friday approaching, I had my mind on BRAPA friendly plan for the final day of the holiday ......

I'll write about THAT tomorrow.