BRAPA - The Wonderful Witch of Warwick 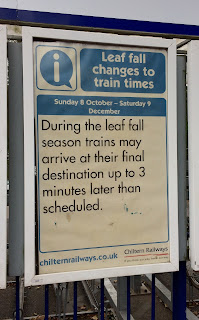 Saturday saw the first of two 'BRAPA Mystery Tours', designed at giving Dad something back from his generous chauffeuring, and leaving him in suspense as to where we were going for as long as possible.

It wasn't until after Derby that I admitted we were changing at Birmingham New Street, and then only at Moor Street that I admitted Warwick was our 'final destination'.  The reason simple, I'd never been to a pub in the county of Warwickshire before in my entire life, never mind a BRAPA one.

We started with a wander north of the centre, through an unfriendly looking new housing estate, when the view changed suddenly, as a canal came into view and a nice looking pub just off to the right: 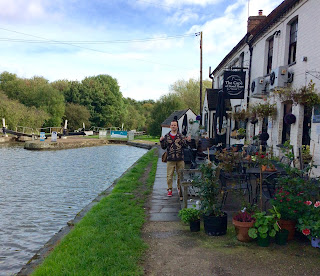 Despite the "open all day, every day" boasts, and the 10am opening claims in the GBG, it seemed likely that they'd just opened (it was dead on 11am) so we were probably fortunate.  Canal pubs are usually good and this had a homely feel, and a Hobo Harry Kane happily pulled us pints of "Cape of Good Hops" the 'house' beer, nicer than most house beers, as two other bearded barmen floated in the background and assisted with 'topping up' as Kane couldn't quite apply the finish on this occasion.  A young Kathy Burke then came along to oversee the situation.  We sat on a narrow stool, and despite the pubby sense of well being, there were signs it was actually trying to offend my 'senses'.    Let's have a look at the reasons for this.  (1) Almost every table was laid out for food. (2) Random Piles of Logs performing no function (though to be fair, a wood burner was nearby. (3) Terrible 60's music, not classics, but stuff that sounded like rip offs of Brotherhood of Man. (4) Bt Sports Plasma screen showing nothing but motivational messages, for example one telling the Welsh football team to stop being a one man team (5) "Snackling", it's like crackling, best served warm, and in a giant glass case on the bar. (6) Gin & Tonic ice cream.  But we were far too happy to find any of the above anything other than "charming", but bring me here at peak lunchtime craziness and it might be harder to enjoy.  A girl with short denim shorts managed to find a non 60's tune, and sang it happily as she teamed up with a mustachioed old local (who'd been hiding in the toilet for the last half an hour) to work out how to switch on an outdoor heater despite being one of the mildest October days ever.  A good start this place!

Dad was telling me to stop dilly dallying with my Twitter check-ins etc as we had work to do to ensure we got through all of today's pubs.  He was right of course.  The longest walk of the day took us back towards the centre, to our furthest south pub.  We arrived bang on 12 noon, the door was open, but a blackboard was blocking the entrance - the pub equivalent of wearing an "off the shoulder" dress with no bra.   I sat in the sun and waited ..... 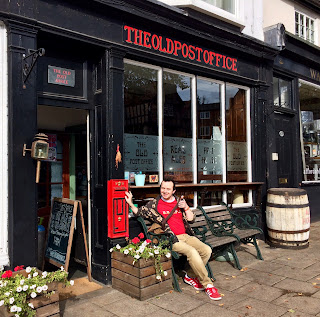 Finally, the blackboard was moved (somewhat begrudgingly) by a very tired looking barmaid who might have just got out of bed, had a hangover, or was ill.  This was a micro pub, and a quality one at that.  It lacked many of the 'buzz' features though, not just a friendly staff welcome, but they'd made a real effort with quirky homely decor, plenty of seating, in fact had it not been for the one unisex bog with 'amusing' slogans, or the beers being pulled straight from mysterious barrels, you'd hardly have known.  So much so, the GBG actually calls it "Warwick's first alehouse", which can't be true.  Stuffed beasts hung on the walls, batman hung upside down, a fake bookcase looked realer than most, and our barmaid went outside to pick up debris from the street.  The place smelt of chlorine, we got embroiled on some word quizzes on Hobsons beermats, and I asked the kind of question you could only ask in a micropub, "why does that deer have red nostrils?"  I liked this place.


A walk into the town centre proper followed, and just behind the market stalls was pub three, but as soon as we swung a right and saw the pub, my heart sank.  You can't always judge a book by it's cover, but you could here.

Quickly renaming it the "Wilted Twig" was the thing I was most proud of here.  Well, that and the excellent quality of the Thornbridge Jaipur, a beer I've had a few consecutive poor quality pints of in the last few years (yes I'm looking at you Sheffield Tap).  But what more can I say?  Two ales on, the Jaipur 5.9% and a Sharps beer 5.5%, perhaps they are trying to get the ale drinkers so drunk, they can't remember this pub, sorry, restaurant.  A slightly cocky, dismissive bloke finally served me, £4.20 a pint when we paid little over £3 for the rest of the day.  You obviously pay a premium for a dining experience, the place a clutter of well heeled families, twilds, prosecco drinkers, and the obligatory "piles of logs not doing anything".  Apart from one bloke in the corner, with tattooed hands and a pint, he must've snuck in when no one was watching.  We took the pints outside where there were some seats overlooking the market, winding down for the day.  We'd misjudged the gale force winds, Dad asked if I wanted to go back in, I told him we'd have to get to Cornish Sea Gale levels for me to step back in here.   Of course, as I often remember, it is a good BEER guide, and for that reason alone, it's a deserving entrant.  And I should observe, if you wanted a meal with your estranged blonde stepdaughter, her non league footballer chap called Kyle, and your new billionaire sadist husband who likes to tie you up on Tuesday evenings, then you'd thoroughly enjoy this place.

Not too far away, we found pub 4 and again from the outside (depressingly similar to the Wilted Twig), I thought "uh oh, not again", only this time, there would be redemption! 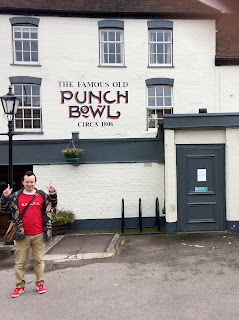 It was at least a relief to find ourselves back in what appeared to be a proper old boozer, as smiling old locals lined the bar, spoke in hushed tones, and for the 4th time today, I went for the exact same beer Dad had chosen.  This was Plum Mild from Shefford, so I proudly told the pub I'd been to the Shefford brewery tap, in Bedfordshire, but both barmaid and locals looked at me like "Si, this is a particularly boring anecdote" so I shut up and supped my ale awkwardly, before retreating to a seat underneath a Sky Sports screen.  The match on was Barnet v Coventry, and me and Dad were soon rooting for the Bees because the commentators were making it all about Cov ... "how sad to see such a big club fall from grace" and mentioning the 1987 FA Cup Final every 2 minutes.  The pub had one of those special atmospheres, which envelopes you the longer you stay there, like metaphorical hands of ghostly old locals were massaging you from behind, which actually sounds more wrong than even I was intending!  Hard to do it justice anyway, the ale was great, locals kept occasionally making pro-Coventry noises, I think they might be the local team, and Barnet hung on for a 0-0 draw (quite easily really) so me and Dad celebrated like we'd actually made it happen, which we sort of did if you think about it.

Our final GBG tick of the day was back near the station, I'd planned it like this, and had a "local pub of the year" sign so I had high hopes for it ...... 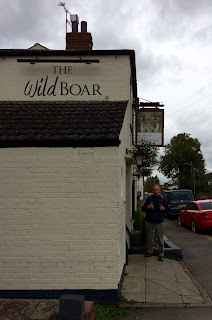 So we walk up to the bar of this nicely dull wooden basic boozer, and order a couple of local 'Slaughterhouse' pints - well Dad had gone to the loo so I had to try and get inside his mind and work out what he might like.  The barmaid tells me in enthusiastic tones that there's a "cider pressing" event happening outside, so we head out to see what action is occurring, only to find one poor man on his own, quartering apples, lamenting the lack of turn out (i.e. nobody) and trying to thrust sharp knives on us to give me a hand.  I'd probably have literally "given him a hand" though, as not sure I'd trust myself with a sharp knife after a few pints so politely declined.  He told the same tale of woe to a couple more onlookers before a local bloke came along to help.  In the intervening period, a scary witch had sat behind me, coughed unhealthily and glared at me for half an hour.  I think a fellow pub ticker might've sent her in to try and psyche BRAPA out.  I also tried to be clever coming back from the loo, finding a short cut and trying to unbolt a locked door to get straight into the garden.  5 minutes later, it still wasn't working, and a couple of old blokes came over to tell me they'd enjoyed watching me struggle!  One of them was the 'outdoor heater' moustache chappy from the Cape of Good Hope.  Small pubby world in Warwick, but a nice place.


Sadly, our train was frustratingly delayed but Dad and had spied a beautiful if somewhat tatty pub across the road called the Railway so we popped in, it was a bit rough n ready but gloriously 'real' and I must have "real ale drinker" tattooed on my forehead cos before I'd even reached the bar, the landlord shouts "we've only got one on today mate!"  What a guy.  We watched people drain fruit machines and kids play darts, it was one of those proper places, friendly too: 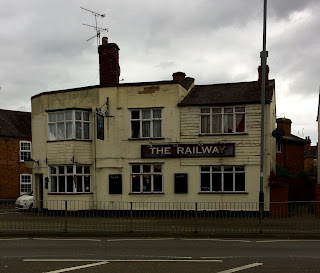 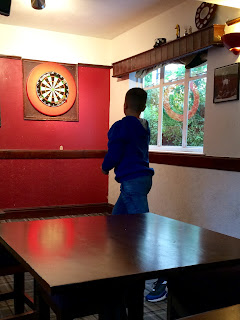 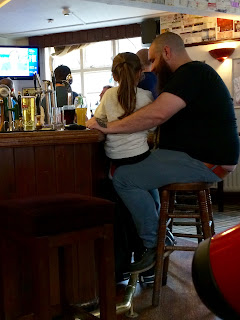 Back in Brum, we had a very welcome coffee and croissant at the lovely Moor Street Station, which perked me up so much, that when I got back to York, I went to 'surprise' my friend who was on his birthday night out, Dad dropped me at the Phoenix, though it took me 4 pubs to locate him and I refused to text or ring, in my slightly addled mind!  I chatted to an old man about new pubs in Whitby.  It was a long day but a real winner, and I hope our second 'mystery tour' in early November will be just as successful.

West Yorkshire midweek BRAPA will be on the slightly later day of Wednesday, so stay tuned for that!