I'm always happy to come pubbing in Huddersfield, probably one of the most underrated beer towns in the UK which doesn't seem to get a mention when people are waxing lyrical about Norwich, Derby, Sheffield and York.

Although pub one was listed under a place no-one's ever heard of before called Birkby, it was just a 10-15 minute stride from Hudderfield station, which even on a rail strike day like Tuesday was, is easily do-able from L**ds and York.

I fell asleep on the train and just woke up in time, so can't report on whether any sobbing students with cellos were present on this occasion.

Anyway, just north of one of the many classic pubs (The Sportsman), I crossed a couple of dangerous roads and the sign of Magic Rock brewery jumped out from over a wall, beckoning me around the back of an industrial unit like a bent copper might in 'Line of Duty'. 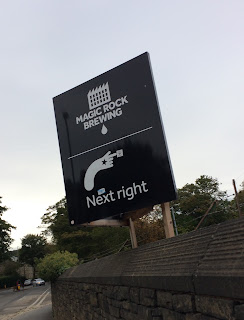 Despite my sense of forboding, the pubs "Garden of Eden" (a pathetic patch of soil sloping upwards) suggested they were going for the "quirky modern brewery with sense of humour" philosophy: 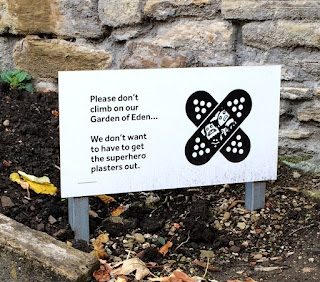 And then I finally saw the way in, hardly the most stand out pub entrance of the year: 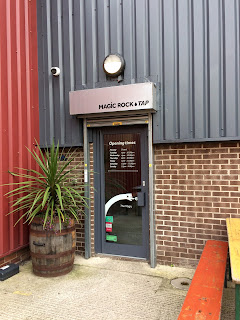 So I wander in, slightly crouched in fear as I was assaulted by Magic Rock branding on every surface available, from beer mats to tables to merchandise, 9 keggy beers and 3 handpumps lurking in the far corner.  they even had "Magic Tap Water", not sure how much they charge a glass!  Their slogan "same but different" is one I really don't understand.  I was served by an awkward bookish guy, a nice relief as I was expecting some over confident beardo calling me "dude" or "fella" and saying "what type o' beer are ya after todayyyy?" like they do.  No this guy looked like a "Thomas", I imagine he eats only marmite based snacks, plays badminton and squash, and has a train set in an upstairs attic.  I ordered a Huddersfield Town based ale, probably something about the Premier League (whatever THAT is), took up a bench, and noted that in spite of the over contrived 'stainless steel, industrial, garage door, visible brewing equipment, corrugated iron' designed, this was more cosy than many actual pubs (Bay Horse of Oxenhope included) with a warmth, and music like James Taylor's Sweet Baby James  helping somehow brainwash you into a sense that Magic Rock is the only brewery in the world that matters.   'Thomas' then sold me a t-shirt for a forthcoming birthday for a friend who loves Magic Rock.  I didn't get a bag for it, never mind gift wrapping.  I sidled off, knowing a bit like when you leave Rome or Madeira, that somehow, you just know you are going to be back here one day.


I didn't even need to look at my map to find pub two, I just walked in one straight line back to the town centre, saw Barclays, peered down an alleyway, and saw a little door ...... 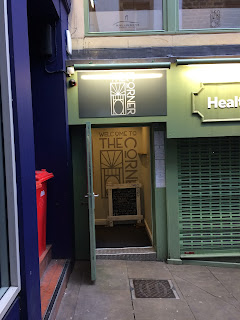 And up a narrow staircase I went, through a door, and into an upstairs bar which I have to admit, did nothing for me 'aesthetically' (if that's a word).  Maybe my expectations were too high, I'd heard this place was a collaboration between ace female brewers Mallinsons, and surprisingly I thought, Sam Smiths.  I say surprising as I'd always imagine old Humph to believe female brewers should be seen and not heard, but I might be being harsh on the feudal old cutie pie.  I scanned the bar, about 6 ales on, only one Mallinsons (one turned around) and no sign of OBB, so I didn't want to pick favourites so I went for something called 'Outstanding Red'.  The barman was Irish and friendly, evoking memories of Saturday's trip to the Windermere in South Kenton, albeit fleetingly.  He asked me if I was "in the club" so I felt for my 'womb', alas it only contained beer, so I didn't get a discount.  An old man was trying to enjoy ale, but his wife was forcing percolated coffee on him, and student girls giggled and drank probable Pimms.  Dried flowers were the decor, there was something a bit 'Dog & Partridge' in Yateley about the design, and that can never be good.  Time for the awkward bit.  I went through a door to the loo, stopped to take a photo of an amusing 'former toilet' sign.  I was conscious I was blocking the staircase, which you had to climb to get to new loos.  So I apologised to this large bloke, "that's alright" he says, I'm now following him up, but he gets lost at the top and goes into the upstairs secondary bar by mistake.  I turn the right way, he recovers, so I go to hold the door open for him, but it's a her (a trans gender person!) who smiles awkwardly as she disappears into the ladies.  I honestly thought the boobs were moobs.  What a diverse world we live in.  And that's a slogan to probably sum up this pub.  I can imagine a lot of people enjoying it, but it didn't do it for me.  Right, time to crawl back under my rock.

So there we go, first two pubs of a hopefully busy October are done.  Next week we are back on Wednesday with a 'guest' from work who lives nearby - that's if buses get us to the pub okay as i have to work til 5 on that day.

Have a good un, secret trip on Saturday awaits.