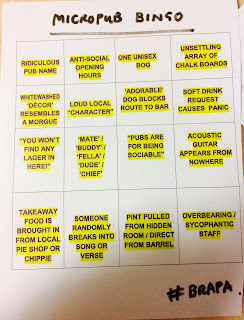 It's not really but you are hopefully gullible enough to have believed me so on a wet Wednesday evening, I set off in search of my 5th last West Yorkshire tick in Brighouse.

I unleashed my above bingo card on the unsuspecting Twitter universe in the build up, and replies were amusing enough to make a journey devoid of any SCS style quality just about bearable.

As the night went on, I realised I'd missed a few classics from the bingo card.  Two I'd definitely add,  "Selection of retro board games", "Small paperback library acquired from local charity shop" (thanks El!) Other suggestions weren't quite specific enough to micropubs for my liking.

Pub one was hidden just back off the main street where the huge Wetherspoons is, it looked like it had been built with small people in mind. 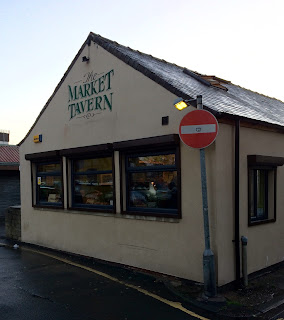 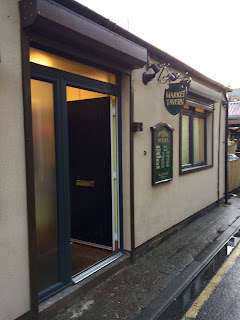 If it had a sadly normal name, it did it least claw a point back for failing to open Monday or Tuesday, meaning I had to break with my preferred Tuesday night out, but these places hold no regard for BRAPA losers like me.  As I walked through a peculiar "reception area" into the main room, I had to dodge two dogs blocking the floor space (the number would rise to a jaw-dropping FIVE) and a friendly blonde lady with the kind of hard hands which remind me I've never done an honest days labour in my life served me a pint of "Waterloo Sunset"stout, with a cartoon Kinks pumpclip which I couldn't photograph due to a crowd of bar-blockers.  Friendly lads, but still irritating. Even by micropub standards, this was an 'old' crowd, average age 77.24 - and that's a BRAPA fact.  Even worse, such "bar blocking" meant I couldn't get to the complimentary bread n dripping on the bar - torture.  There was nowhere to sit (or stand) so I had to retire to the 'reception area' where a trio of ancients were just leaving, perfect timing, after I made stilted whether conversation with one of the ladies, whilst the man left early to get them all fish n chips.  Sadly, I was cut off from "where the action was" but a forest mural with deer, a 'humourous' mouse hole, a collection of GBG's and a new couple with excitable twog reminded me I was in a micropub.   Dogs 4 and 5 (too huge for a pub like this) were being 'given an airing' by a rugged middle ager in the garden, so his bored twild son came to show me a kinder egg toy he'd acquired, thrilling bit of plastic, I nodded enthusiastically.  Twog 3 was getting much attention from visitors, most notably the local village weirdo who insulted it for 'being mucky' - "has he been swimming in t' canal?" before telling a depressing story of the cavalier he lost two years ago, hence his unwillingness to "let go" of any dog he meets, but hey, I'm not here to be the pub psychologist.

So that was that, I thought, as I stood on Brighouse station and waited for the train to L**ds to arrive.  However, I noticed it was on some kind of weird circular route, stopping firstly at Halifax, and eventually L**ds but only via Drabford.  50% of my remaining West Yorkshire pubs are in Halifax, ok, it was dark, cold, late and wet but would be a crime not to "whip them in" now surely?

So I 'alighted' at the 'Fax where a gaggle of enthusiastic dudes in red jackets gave me a huge 1.5 litre bottle of Coke Zero.  I'm used to free tasters / samples in L**ds in the morning, but I now had to wrestle this into my rucksack and lug it around Halifax!

My next pub eventually appeared through the murk after a homeless punk rocker had shouted in my face.  Had it been free cider instead of coke, I'd have happily given him it. 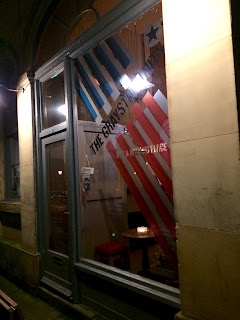 An immediate point for the name, probably the pub that sounds most like a call to arms for disenchanted Sunderland AFC fans than any other in the country.  A tiny one room greeted me, two expectant blokes sat along a bench, and a landlord perched at the bar nodded nervously at me (I had my hat on so probably looked that 1% bit more threatening than your local micro really allows).  I had a crisis of confidence thinking I only had about £1.60 left and would struggle even to get a half, but then remembered I'd drawn £20 out, and panic was averted, but not before I'd told the landlord and made a fool of myself.  One of the two blokes says to the landlord "personal question, how old are you?"  "50!" he barks.  End of conversation.  Gotta love that sharp micro banter.  So where to sit?  Despite only 2 customers, the room was almost full.  First I saw a bench near the loos in a side bit, but to my relief, a back room, cosy, decorated, a fake dog, board games, chandelier, acoustic guitar, charity shop books, low flung settee, and one anti-social man in the window scowling to dare enter "his room".  Soul music played steadily, but after 15 minutes of peace, a vortex of Halifax Evening Alcoholic Desparadoes (HEADS) appeared to shatter the calm.  One man randomly played the green guitar on the wall, just because he could, and a trio (probably swingers) who I described as "awkward, bubbly and randy"  boasted about their band's 'world tour'.  "We are only playing three dates .... Glasgow, Bristol and ..... Holmfirth!"  Classic.  I liked this place, it really is all about circumstances, and unlike Brighouse, I probably got the best seat in the pub. 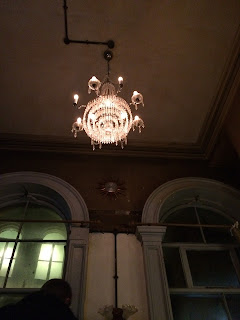 And just around the corner, we came to my final pub of the night .....

So I wander in to this deeper main room, and despite a smattering of relaxed drinkers, there was actually space to swing a cat (well, swing a twild cos cats are too lovely to be cruel to).  From the off, there was a lovely atmosphere about the place, calming with a faint buzz (but I guess that could've just been the extractor fan), and I think that's why I'd rate it most highly of the evening.  After a friendly but not overbearing greeting from Mrs Pump, a friendly bloke at the bar commented on my Adidas Gazelles.  "Best type of shoe", we both agreed.  And soon we were chatting pubs n stuff, and when I got onto BRAPA, he looked horrified cos he has a friend (called Rob Pole or something) who is doing EXACTLY the same thing!  So that's at least 4 of us.  This bloke hates social media, and although a Yorkshireman, moved to Wilmslow which he HATES with a passion.  A wise, if slightly masochistic sounding man.  I had a rant about Halifax being one of the best underrated pub towns out there, which Mrs Pump seemed to love (it's true, I wasn't just saying it) and I learnt about TWO MORE micropubs (the Alexandra and the something else with weird name) which are just too new to be in GBG - jeez, at this rate, I may as well book myself into the nearby Premier Inn!  I got a sip of a new Vocation beer coming on, noticed some weird pricing (it was about £3.30 a pint, bit steep for Halifax but the taps behind the bar selling colder fizzier beer were like £4.50 - £5 (I think for a half!) - madness! Maybe I was mistaken.  Paul was a recent convert to ale, having been a lager man.  As a nice postscript, a bloke randomly walks up to the bar with Gazelles on and says to me "you should've phoned me to tell me what shoes you were wearing - haha" but his were burgundy, mine proper red.  So the three of us chatted Gazelles.  This pub really needs to be renamed the Micro Gazelle.  Mrs Pump might have to leave though.


So that was a bonus wasn't it?  Only TWO West Yorkshire pubs to do.  I'm on holiday next week so it'll be a week on Tuesday for the next one, opening hours permitting.

It was late by the time I reached York, getting on for 11pm after a Big Mac meal in L**ds station and a slight delay.  Norwich tomorrow, early start, must dash.