BRAPA - North Yorkshire : Even More Ales in the Dales 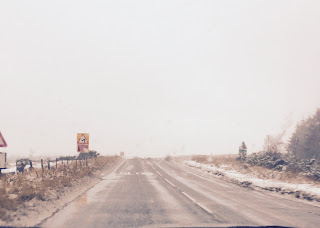 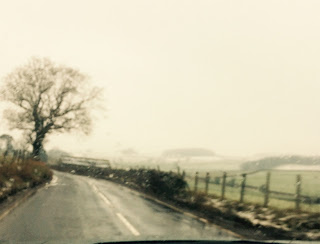 We arrived in the outlying Swaledale village of Reeth at 11:24am, 24 minutes after pub opening according to the GBG and WhatPub but annoyingly all was darkness from within after I'd trudged to the main entrance in a wet blizzard, having almost been run over by a tractor.   What did offer hope was a blackboard outside showing the winter food menu began at 12 noon, so we waited.....

And bang on 12 noon, the pub door jolted open and we raced from car to pub door, this time nearly being run over by that most uncompromising of BRAPA creature, the "dithering woman driver". Once inside, I was surprised to see we were not even the first customers.  Either this couple were ghosts, or residents staying in the hotel.  You decide.  Dad was very thrilled by a new 50 pence piece he'd acquired, which led the chatty no nonsense landlord down a "Scottish/NI notes are legal tender" rant, making sure we knew this pub saw more Scottish tourists than any other Dales pub (they probably feel at home with the weather).  We were soon on a much needed pint of Gamekeeper half in front of a roaring fire - man ghost found out the WiFi password was 'realale' so Dad took the opportunity to try out his new smartphone.  Baby steps, but I tried to give him a few pointers.  Three lads pretending to be walkers appeared on the scene, ordered brie n bacon, and went to watch Arsenal v Hull City in the back room.  Tempted to stay and cheer on our team?  No it felt like it was going to be painful and my hunch was right.  I may have accidentally trashed the pub in Clattenburg-rage.  We were more than content in the cosy bar area, Mrs Buck arrived, peered out of the window, and goaded the weather Delia Smith-esque style "come on heavy snow, we can't see ya, idiot weather forecasters, pathetic, where is the extra man??"  One of the best Dales pubs I've visited and that list has become quite long since 2014. 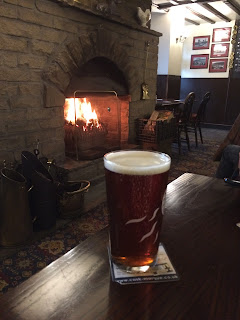 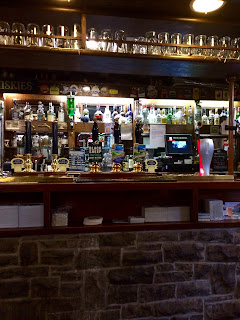 Back in the car, we typed in post code of pub two which returned that now familiar address "unnamed road".  We have become quite accustomed to rural outreaches and dodgy winding treacherous roads up here, but this still raised eyebrows.  We eventually found it even if Mr SatNav had stopped communicating with us (sulking from earlier cos they had built a new road near Bedale which confused him as he thought we'd gone 'off-road', the utter dimwit). 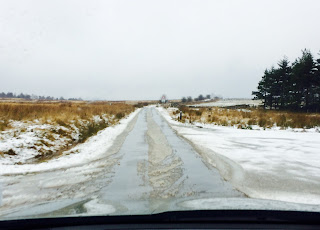 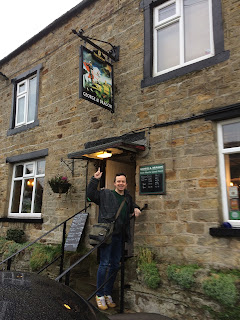 I'd been really excited about this one because not only is it community owned but also shortlisted (or it was) for the top CAMRA pub of the year award.  So I was quite surprised how modern it felt, loungey, not at all restauranty, but we felt the huge back window view over the Swale Valley let a bit too much light in (the pub's main attraction apart from the ale) and thus, it lost something of the warmth of it's Reeth counterpart.  What was impressive was the barman's service, helpful friendly attitude and the superb beer quality (you know when you've been having good quality ale but suddenly one is so good, it really hits you?!)  And it had a great community feel as a sheepish old lady tottered in and asked us to take part in the raffle - or the greatest Hudswell rip-off, as it should be known.  You get a card with a few pairs of numbers on, from 1-30, then I was privileged to draw one of two numbers, 8, and someone else drew a 20.  Dad caused a kerfuffle by claiming he'd won because he had 28 on his card, but alas, you needed 8 & 20.  Chances of winning this?  A better mathematician will tell you it is probably about 1 in 1,800.  I let Dad vent about Hudswell village hall corruption, neglecting to tell him the woman was now sat right behind us!  She sloped out guiltily soon after.  Classic.


Back towards Bedale we found the pretty village of Snape, which no one has ever heard of before and was probably built in 2016 just so they could open a pub in a weird location and put it in the GBG to confound pub tickers like me.

The Grinton-esque Jennings sign was an indication we were entering Marston's territory, and whilst it wasn't one of their horrific family dining pubs, it's fair to say that you are hardly likely to be blown away by it's brilliance, because it isn't.  Cosy and low-ceilinged, another fire, though we had to share a table with the food and wine menus, oldsters with their faces in the nosebag, two poncey handsoaps and bog-standard (literally) paper towels arranged in a wicker basket, this was verging on twee bollocks when all said and done.  You know what is annoying in pubs?  When a group goes to the bar and then pay for all their drinks separately.  I'd normally blame younger people for this, so when three coffin dodgers sidled up to the bar and told the landlord "I hope you are good at dividing by 3", I thought it was a bit rubbish of them.  Our beers, a new fangled Wychwood and a new fangled Marstons were both a bit thin and limp, hard to know if pub or brewery but looked good so perhaps the latter.  A very hungry dog kept licking my hand, ugh.  The gents were labelled "Kings", the ladies "Queens" (I assume, maybe 'Prawns').  More and more dogs appeared, one called Lucy caused the most consternation, we were soon hurdling them Beckenham style, before someone announced "if he's got an attitude, he'll wee on the floor!"  Hard to know who they were talking about.

We had to scoot back to York pretty sharpish for family related 'fun', but overall a really good interesting day and some nice pubs.

I've forgotten to review my Friday trip to Skipton so will do that tomorrow (Monday) night if I have the energy.  Tue and Fri I have further West Yorkshire trips planned, and a similar day to this one on Saturday.  Only 17 Yorkshire pubs remain - come on, we can finish this!