BRAPA - The Return of Hebden Bridge 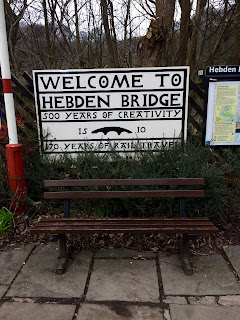 When the first green haired, pagan, vegan, lesbian settlers came to Hebden Bridge in the year 1510, bringing with them a hippie culture, the ability to open shops selling crystals and incense for ridiculous sums of money, before retiring to run a cattery, with a bit of paranormal investigation on the side, who'd have thought that in the year 2017, they would be more "relevant" than ever?

Not that I'm stereotyping the good folk of Hebden Bridge, it is a lovely place and am always pleased to see a new GBG pub to visit, which invariably happens every edition.  But not too lovely as to be twee, the kids in the park try their best to be threatening along the old canal, and there were signs that people from Coatbridge and Airdrie were holidaying here ..... 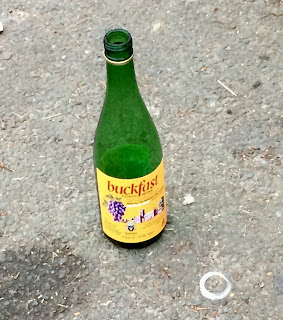 So I'd probably say that the micropub fits in with Hebden culture, and this one was an absolute cracker despite a shaky start ..... 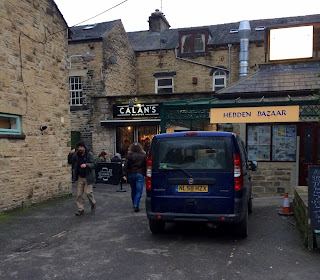 Friday evening isn't the best time to enter a micropub (or any pub for that matter) and I was wedged in the entrance door for 5 minutes behind a hairy rugged man (seen above striding purposefully into the pub).  He was the most 'real' customer, the wait was for 5 middle aged women making a song and dance over, you've guessed it, a Prosecco order, but mercifully, they read my mind and pissed off into the cold courtyard.  A man covered in dust and soot came in behind me to swell the numbers of 'proper pub goers' to a massive three, he joked if he could order "4 quarters" of ale - I didn't get it, because I thought this is EXACTLY the kind of thing a place like this'd do!  After all, you see three thirds often enough.    Just as I got served, a seat became available and with Messrs Hairball and Sooty happier to block the floor space than sit down, I darted into it.  I was opposite a watchful middle aged couple, the hubbie had a broken foot and it was up on a chair, stopping me from getting a good look at, or photo, or the impressive GBG selection that dated back to 1978.  To my left, a couple with a bored dog kept nervously glancing over - all I could do was admire the pump clips and wall decor, it was a bit cheek to jowl but there was a great warmth to the hubbub, and to enjoy a Friday evening here was testament to what a good little pub this is.   I also managed to nick THREE beermats for my collection, no need for emergency ones here!


My train App decided I should change at Dewsbury instead of Leeds for a change so I spent a quick 15 mins in the always wonderful and impossible to leave West Riding Refreshment Rooms, home of the worst Pub Periscope Podcast in living memory, but I don't want to remind you all of that!

It was back home quite early as I had a "bonus" Saturday trip to fit in before Sunday's main event in North Yorkshire.  Oh, and only one week til I can have a shower again!