Summer is here and that could only mean one thing in the weird and wonderful world of BRAPA, the third year of the 'Heavy Woollen Tour' where a group of unsuspecting work mates join me for some pub ticking.  However, with West Yorkshire having been completed, we had to go t'other side of t'hills (booooo) and rename it the 'light cotton' tour.

Seven people was a new record turn out. Joining me were regulars Richard and Jason (the yin and yang of Dewsbury apparently), Piper who was our token female attendee and was very scared of train travel, Sy Clark who has a very infectious laugh and is a very positive lad for a Leeds fan.  Chris Hastings, a young jolly Sunderland fan, arrived in a huge thick raincoat despite the 24 degree weather,  and Danny completed the group.  He's the youngster, and this was his first ever day drinking pints of real ale, "popping his real ale cherry" as he put it.  A good group.

They were probably all regretting it as I marched them up steep hills from Mossley train station in extreme heat like some tour guide from hell, but this was our only tricky to get to pub of the day, and it would prove to be worth it ..... 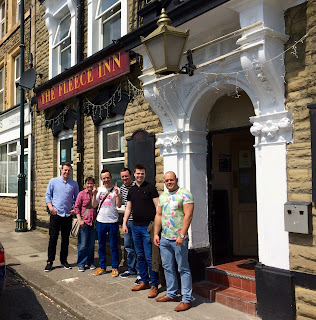 We voted this first pub our "pub of the day" later on, and it was thanks in large part to the excellent landlord who chatted to us throughout.  As Richard commented much to the locals disgust "of course he's good, he's a Yorkshireman" after he'd told us how he'd followed god and the missionary to this pub (or something) but he was no god-botherer, and he recommended me an ace Lady Julia from Grafton.  Mine came in a strange feminine stemmed glass (I think this was supposed to be Piper's pint) but funnily enough, last time I had a pint of real ale in a glass like this, it was a Grafton stout
(in Biggleswade) so perhaps this seemingly uncompromising Notts brewer likes the continental style glassware.  The pub was ultra traditional, multi roomed and when we admired the pump clips on the ceiling, our favourite landlord excitedly told us how he could get a rare beer from Macclesfield within a week.  It sounded rather reasonable to me.  Jason, who'd had 5 sausages for breakfast, had slipped into a sausage coma and could not communicate for a good 30 minutes.  Our host told us how the Rising Sun is one of the best pubs in Mossley but because a CAMRA person witnessed the landlord being horrid to a customer, they've de-guided it.  I hate it when I hear stories like this, it is a Good Beer Guide, not a Lovely Person's Guide!  Grrrr. 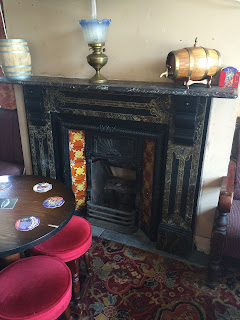 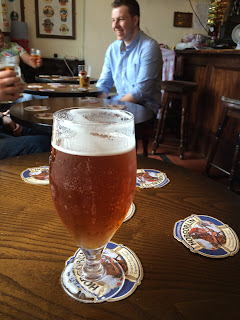 The walk back down the hill was a lot easier, and not far from the station was our second pub, but it didn't have anywhere near the level of charm of the Fleece.  True, it was delightfully basic, dark with a few moody looking locals, it had a pool table, fruit machine and a stage, and not much else!  I ordered a Millstone Stout which I enjoyed in Ashton-under-Lyne, but here it had a tang which made me think perhaps it wasn't in great condition, though the people who went 'Tiger Rut' really enjoyed it.  We just sat and drank and slagged off work (the problem when work people go out together!) and just as we were finishing our drinks, a problem I had overlooked on a warm sunny day in this part of the world .... Transpennine Scum!  A huge group appeared around the far end of the bar acting like boisterous idiots blocking our way out, and it didn't help I left my bag in the pub so I had to run back for it - unsurprisingly the locals hadn't noticed though one local old boy was chuckling to himself in a nervous way. 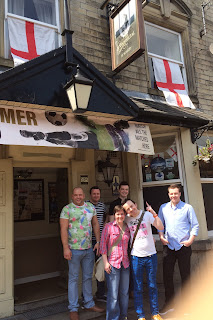 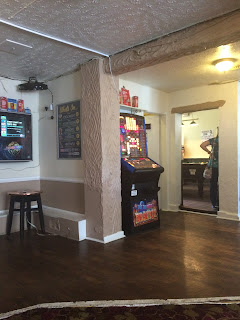 We did well to generally stay a step ahead of the Transpennine Scummers, but as I took the obligatory blog photo, we encountered a particularly hateful sub-group, some cocky young men in lycra masquerading as bikers.  Except that had no bikes.  They did have a bike bell though that they kept ringing.  When one asked Jason for use of his lighter and Jason warned him about the large flame, I was kinda hoping they'd go up in smoke.  Or the lycra would burn into their skin.  Or maybe that is a bit harsh.  Inside the pub, and this was a step up from the Commi, as the landlady overheard me and Chris debating Doom Bar's 'merits', turns out that if you are a pub that has Sky Sports, you get Doom Bar for free!  So that explains why it is everywhere.  A better Sharp's beer is Atlantic and I enjoyed this though the even better Lowry themed one from Hydes had just gone off.   The pub was in a bit of state of flux, preparing for new carpetting and an all round makeover (I still think the Commercial needed it more) so I warned the landlady it better retain it's pubby vibe.   We sat in the front seating area as for a third Heavy Woollen year in a row, the weather was amazing.


It was time to get the train to Greenfield, hemmed in by thousands of the TP scum, so much so that as we stood in the boiling hot vestibule, I told the train guard that we weren't part of them and tried to explain BRAPA.  His conclusion was "right, so YOU are the cream of the pissheads!".  I suppose so. 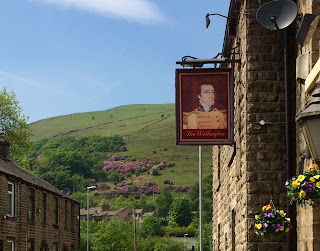 One of the highlights of the day was this cracking little pub, nestling beneath the hills.  Something about the pub name 'Wellington', it generally seems to guarantee a good pub experience.  The barmaid seemed to find our particular brand of work-gang "bantz" amusing, as I reported how we'd managed to burn off the TP Scum who'd all gone to the Railway Inn as you'd expect from a group of vile, odious sheep.  After ordering a huge amount of Salopian Lemon Dream ,we were soon out at the front of the pub where I went in search of a beer garden, but only found a lane of "vice".  First, two very made-up glamour girls got into a pimp mobile, possibly with the emblem "Greasy Joe's on the side of the car.  Richard claimed the lane was called "Suck Off Alley" though I can't testify to this.  Meanwhile, an old man who still hadn't come to terms with the smoking ban took a huge breath and blew his smoke in through the front door in a defiant act.  Then a girl with sunglasses and short dress walked (bounced) past and tried to look appalled that anyone would look at her.  What a peculiar place Greenfield seems to be.  But we liked it!

Another classic traditional olde worlde pub, all stone and wood burners, I remember thinking how nice this pub'd be on a dark winters night as I ordered a pint of the Greenfield "Silver Owl" which we kept seeing everywhere and I couldn't avoid any longer.  Again, we sat out at the front of the pub and if I had one criticism of the day (apart from my painful sunburnt neck!) it'd be that despite the rural locations, there didn't seem to be many actually spacious beer gardens.  In a move reminiscent of last year's trip to the Reindeer in Overton, Richard asked if there were any other pubs in the area we could squeeze in, and before I knew it, I'd booked two taxi's to Uppermill but didn't realise the taxi company was literally around the corner so we had to neck our drinks.  Ooops.  Not sure we got the 27.5 minute minimum in here but not to worry, I also worked out I could walk to Dobcross from Greenfield so perhaps I may revisit here on a NFFD or the like! 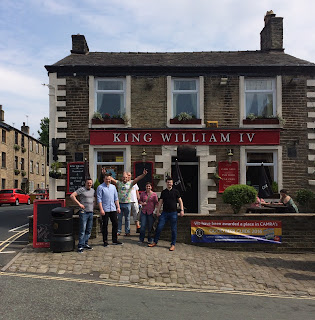 After an interesting taxi ride where our young Asian taxi men were quite excitable and intense, I nipped to the loo, ordered a JW Lees Kaleidoscope and went to sit in the beer garden (it was almost proper this one) for what seemed like ages, as Jason & Piper hadn't seem me come out.  Apparently, the staff were poor in here too hence the even longer wait.   Pub did have a lovely village feel though inside, as good as any we'd been in today from my brief experience with it.    I took in the scenery and noticed the church I could see was Saddleworth Church, so me and Piper were right, that was probably Saddleworth Moor we'd been looking up at all day.  Now Ian Brady probably isn't in to real ale, but I wonder if he ever came here with Myra for a home cooked child pie and pint of Tennants Extra Fizzy.  Funny what you think of six pints in isn't it?  I hear the pub has been in the GBG for 40 years so even more reason why it was a good tick to get, and for a John Willie Lees, really enjoyed the ale.


The taxi's took us back to the Railway Inn so we had a swift one there but was still too crawling with TPers to be fully enjoyable, though glad to report I had a pint of Tiger Rut for my 3rd successive time in this excellent pub.

Back in 'Udders, we had a MaccyD's before a trip to premier 'Spoons Cherry Tree which am surprised to see not in the GBG this year as the ale is always superb and the Stancil Stainless no exception.  Danny did exclaim "I could murder a nice cold lager right now!" but on the whole, he'd done very well for an ale newbie.  Train back to York for fish & chips, end of a superb day but it'll be nice to be able to notice the more minute pubby details next week in Ayrshire.