It was the day after Wembley as we travelled back north, quite fuzzy-headed and still disbelieving of how good the day had actually been, but I was just about alert enough to hold Dad to an earlier promise "if you see a difficult pub you need for BRAPA just off the motorway, we'll stop off".  This is why Bernard is a leading BRAPster.

Having reluctantly come to the conclusion that the B4368 Clun - Abermule road couldn't really be considered as being just off the A1 or M1, I settled on a pub that has been causing me much South Yorkshire evening woe due to busses not running after about 3pm.

The location was more remote than I expected, but once we negotiated the country lanes (SatNav woman was suffering from PMT so had stopped talking to us, bless the lord) we found a village so beautiful it felt like it was saying "come on then South Bucks if you think you're 'ard enough!" 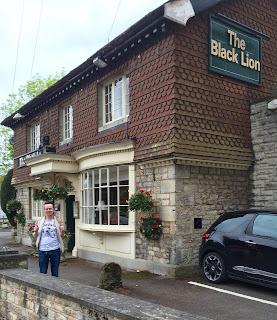 In true South Yorks tradition, it's opening times were subject of much debate.  11am is very unusual for a village pub on a Sunday, but everything said it apart from the actual pub sign that said 12 noon.  Why can't South Yorkshire just behave?  The pub had low beams, was well furnished and a nice 50/50 split of traditional and modern, and the inevitable influx of Sunday lunchers somehow did nothing to detract.  This was possibly because most people were eating chip butties with their yearly salt allowance and a generous helping of Henderson's Relish.  It sounds like an S.Yorks stereotype, but it was brilliant to see.  The two barmaids were having a whispered conversation about a couple in the corner "oooh, he used to talk to me, NOT anymore", and "she's got a rubbish dress on, I don't trust her", I couldn't really hear so am filling in the blanks but it was classic bitchiness, and the landlord gave a sideways glance to indicate the lack of professionalism.  The guest ale was New York Pale by Chantry from Rotherham and there can't be many better, but Dad's Bradfield Farmers Blonde was an obvious rival.  I could feel invisible pubby tentacles grabbing at me, trying to keep me here all afternoon.  Despite being at the bar for all of two minutes, a local with a  classic mullet commented to the brunette barmaid "don't mention the football, we blew it" before she replied "Hull City were the better team and what a great goal!"  I thought they'd all be Millers fans (or "Toytown" as they call them) so serves them right, failed glory supporters, and wished I'd kept my Hull City top on now.   Wonderful pub.

So, that was that then but fast forward 48 hours plus and much sleeping and recovering, and I was on the always characterful 16:40 Leeds to Barnsley "express" train.

"I'm a real ale man and I like my real ale!" announced an old man being humoured by a young student, a great intro to a BRAPA evening if ever I heard one.  He then claimed Barnsley had no real ale pubs but before I had chance to beat him over the head with a paper bearing the words "Old Number 7", he started going on about how lonely he was since his wife died .... "yeh mate, we've all got problems, you're starting to bore me."

Barnsley bus station was it's usual classy self so after a Coopland's sausage roll, I was on the number 1 service to Mapplewell, or "Mapp" as Caroline at work told me I should call it.  The skies were grey, the wind was swirling, but a traditional looking South Yorkshire hostelry was on the horizon ..... 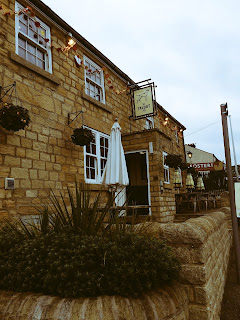 So imagine my surprise when I found a pub choc-a-bloc with diners, and I mean EVERYONE apart from one nervy looking youth at the bar had their piggy faces in the snoutbag.  However, things took a turn for the better when I was told that the ales (all from Four Roses brewery in nearby Darton) were £2 a pint.  Happy hour!  Til 6pm.  It was 5:43.  Even my comment  "I better get drinking quickly then, ho ho!" made two barmaids laughed, the third obviously thought I was a bit of a tosser, but a 66.67% win ratio is better than normal in the "BRAPA bar room banter" stakes.  I wonder why I haven't encountered happy hour more often on my evening trips, considering 5:30-7 is about my peak time.  Perhaps it is a dying art?  Perhaps the discounts are usually so measly I just think it's a decent value pub?  Perhaps it usually only applies to locals?  The Heron Porter went down well as I squashed in a rare free seat, with only a leather bound menu as opposed to knives, forks and condiments.  I was immediately wedged in by a sour faced couple who were lacking in spatial awareness, charm and were up and down like yo-yos.  Seriously, the number of trips to the 'specials board' made me think they were trying to memorise it a la Generation Game.  Being outer Barnsley though, this somehow still felt a lot more like a pub than a restaurant, perhaps the high proportion of Barnsley home shirts kept the experience down to earth.    Then, an even weirder couple sat at my table with their backs to me, using it as a kind of waiting area before a foodier table became available.  It would have been easy to leave in a 'food pub rage' but instead, I embraced it and with my watch showing 5:58pm, I'd drunk quickly enough to warrant a second pint, something paler.  It says a lot for the pub that I wanted to do this.

I bussed it back to Barnsley and trained it to York via Leeds in fairly good time, working out I won't finish ticking off South Yorkshire before the new GBG comes out so will aim for the end of the 2016, as I will probably have some new West Yorkies to tick off too.  Thinking ahead!