It was another scorcher in Ayr as I enjoyed breakfast without a hangover despite the 7 pints yesterday (you wouldn't get that on the lager) and I met a couple from Belgium who confessed they prefered wine to beer but at least they admitted the error of their ways.  It was decided that I was a "healthy alcoholic" which I'm choosing to take as a compliment.

I departed Ayr and it was not long before I arrived in Glasgow where I was staying at Charing Cross, but as I walked across the city, I got distracted by a Wetherspoons I'd not been to before .....

When is it acceptable to be a rugged old man stood at a 'Spoons bar in Glasgow ordering coffee and maple syrups pancakes?  When you are American, judging by the scene in here.  All the ales on were 5% plus and my liver was groaning at the prospect of these "wee heavies", beers that discerning English ale men pretend to love to make themselves sound hardcore, but secretly hate and pour half into the nearest plant pot.  I soldiered on manfully through my Cairngorm Wildcat but it was a struggle, I only got it cos it had a cat on the pump clip.  Before that though, I was relieved that the young bar boy accepted my 50p off voucher after the Prestwick fiasco, though he was new and didn't have a clue how to process it.  Irish barmaid was more than happy to help solve the problem, as our American pancake lover had started chatting her up.  It was a huge 'Spoons of little character, but this was enhanced by a man with what can only be described as 'furniture OCD', all red faced and angry, started moving all the chairs around so they matched and were neatly aligned.  He even left the pub to go into the street to look for "better fits" at one stage.  As if to emphasise the otherwise blandness of the situation, a family of Coldplay fans came to sit down and 're-live' last night's gig using camera phone footage in their matching t-shirts.  Awful.  Though the pub was huge, everyone insisted on sitting in same empty area I'd chosen.  Is it a tribal thing?  Seems to happen a lot.

After checking in, I noticed the first stop from Charing Cross was Partick where I had a pub to tick, so I jumped aboard a train where the range of refreshments on offer was lacking .... 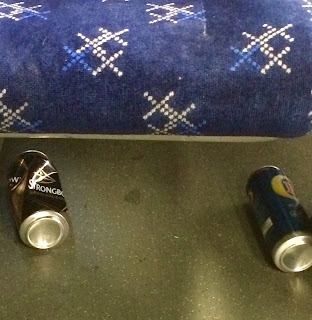 I was surprised to find Partick quite a cosmopolitan place (until I noticed the nearby University) with lots of Asian students milling about.  I had imagined it to be like a scene from the apocalypse / Cowdenbeath (delete as appropriate)  so was quite relieved.

Maybe it was the surprise what a little gem this was, or just tiredness from the two days in Ayr, but it was time for me to act more like a pub tourist than I've ever done so far this year.  First, I was struggling to see all the pump clips and asked the barman "to give me a minute to look" until the locals pointed their sturdy Glaswegian thumbs in the direction of a huge blackboard next to my head listing the ales in huge letters.  Why I do I never see the blackboard?  Ever!  Then I proceeded to walk into the ladies loos and had to be called back.  I think this was a result of too many Scottish pubs bearing the signs "lads" and "lassies" , so by now, seeing the letters "la" is enough for me.  All I could really do from this moment onwards was hide in the furthest corner, so I found a nice raised area facing a window so I could be a dunce, which meant not enjoying the pubs fantastic bare boarded pub mecca status.  The view was interesting though, as it faced a busy crossroads so I could enjoy lots of road rage and potential crashes.  I've not had this fun looking at traffic from a pub since I was in Clapham Junction's wonderfully ornate but total scuzz hole, the Falcon.  Shops in Partick seemed to sell either beer, dentures, oriental food or training courses.  Then I realised there were two GBG pubs just five minutes up the street I was facing.  Love it when a plan comes together.

Bit of a strange one next in that it felt like a chain pub but was hard to tell exactly what it was supposed to be.  A huge square building and they were geared up for Euro 2016 with all the flags of the nations competing draped both inside and outside the pub (and strangely enough, a Scottish one which gave me my first chance to taunt them over failing to qualify, but you should blame Martin Taylor for leading me down this path!).  Sky Sports News presenters echoed around the room.  9 out of an impressive 11 ales were on, but only two were Scottish, and with one described as a traditional heavy Scottish ale so I went Bitter & Twisted, another staple of a Scottish ale trip just like Jarl.  The pub was packed, so I perched on a surprisingly comfy high stool (I don't like these things) and noticed everyone else in the pub was drinking Tennents lager in keeping with the pub name.  One such drinker was a mad man who went up to a frail old couple having lunch and complemented the lady on her mustard coloured top.  She didn't looked impressed.  He later sat behind me and at one point, started chanting "scampi and cheps" over and over again.  At the bar, I'd managed to keep my embarrassing pub tourist behaviour going by mistaking 20p for 1p coins and my change twattery had to be patiently put up with by the barstaff.  The staff did look knackered actually, as if they were on 24 hour shifts.  I found a quiet room called "additional seating" but people just kept looking at it suspiciously like it was a trap.  It was that kind of a pub.

Just across the road and a few doors down, my next pub seemed to be a Starbucks with a mass of scaffolding up, but I found an entrance and shimmied down some steps into a dark place which you could immediately tell had pretensions of being upmarket, even though there was not a scrap of evidence to support this.  The barman was a lively young chap, and we were soon chatting on the "blonde ales for hot days", "dark ones in winter" subject but I think I confused him by imploring him to try a "summer stout" next time he gets a chance.  Not sure if such a drink exists, but he seemed to take my comment at face value.  Still, he boasted that the ale (£2.95) is normally £3.95 so I'd done well to come in when I had (I wish he hadn't told me, £3.95 is obscene) It was time for part three of my stupid pub behaviour as I went to the loo and immediately broke the soap dispenser - what is wrong with me today?   When I returned, a barmaid looked at me in that "I know what you did to our soap dispenser" kind of way, or maybe I was being paranoid.  Two men appeared with their dogs, which they then used to charm the two barmaids and soon everyone was lying down on the floor.  It was time to leave.

Ten minutes further back towards Glasgow and I finally found this place, hidden in a huge un-pubby building but this was my first and only 'modern ale bar' of my holiday.  Approaching it down stairs with quirky decor, it reminded me of Major Tom's in Harrogate but the bar itself was a more limited slimline thing, a bit like a smaller North Bar in Leeds.  Three young staff raced to serve me, and it's always nice to ask where the cask ales are in this situation, and as it was, I was being slow as usual not seeing the board advertising them at the far end.  Staff were helpful and ran me through them (very much like Aberdeen's thingy Degrees North) and soon as was drinking a "Lactose Tolerant" stout, thick and treacly in the boiling hot of the 'beer garden'.  Summer Stout?  This wouldn't qualify!  Anyway, I say 'beer garden' as it was an outdoor drinking area, with railings to stop you falling in a river, with a bridge looming overhead.  Cyclists kept racing past but most came back the other way 30 seconds later and got a pint.  People got told off for ignoring a lame chalk line written on the pavement saying "no drinks past this line".  It's probably hipster artwork or something. The atmos was happy and relaxed and me and a lad 'bonded' over 'watching his drinks and bags' whilst he went to the loo.  But then I got talking to a nice passing cyclist called Steven/Stephen so I obviously bored/intrigued him with BRAPA, gave him my last card, and he helped me find a scenic way back to Glasgow by park.  Decent place for a drink this, nice to have a different drinking experience.


It was a nice walk through the park, I even stopped to have the last of my scotch eggs (pretty much my staple diet of my trip!) and a bottle of water to sober me up.  The stout plus boiling weather really had gone to my head, and I'd been doing enough stupid pub things when sober!

Back in town, I found another 'Spoons quite near where I was staying so after doing a food shop, I came here.  State Bar was so close, and it kept peering at me though the window, oh BRAPA can be a cruel sport sometimes.  There seemed to be more beers on than you get at most pub beer festivals, and the Lerwick IPA was amazing (I'd been loving the most recent series of Shetland so it seemed a logical choice).  Again, the pub was quite busy as I guess it was post-work drinks time for the Weegie folk, they all looked hot and bothered but I again had to zone out of EU referendum chat.  I observed two groups of 5 or 6 people both looking suspiciously at a huge circular table seating 8 and then moving on, cramping themselves into something smaller.  So I took my chance and sat down.  Don't you hate it when one person sits on a table for eight in a busy pub?  Like I give a shit, it had the additional attraction of being directly under the pub air-con, which was heaven.  Their loss, though I did notice quite a few glares coming from the locals.

I was back in my hotel room before 7pm so I had my picnic, ramped up the air conditioning to the max and then the One Show started so as you can imagine, I fell asleep quite soon after!