It started in a Shipwrecked hungover Brewhouse in Cleveleys at 11:30am on New Year's Day ......

..... and it ended in a tiny side room in Burton's Weighbridge Inn trying to avoid the gaze of a forlorn Mark E. Smith .....

Both of these places were top quality micropubs, one of the surprising themes that ran through my January ticking.  The quality of the ale and the busyness of the venues were also common trends, in fact I've never known a livelier pub January since records began!

Dryanuary wasn't much in evidence, I'm glad to report.  Maybe people feel they've suffered enough over the past two years to spend it outside of the pub?  People were friendly, often jovial, at times raucous.  In fact, it all felt like December had gone to 'extra time and penalties' but without the Christmas jumpers or dickheads golden and silver goal rule.

You might not be surprised to learn that my favourite pub January was also my most productive.  40 new ticks, breaking the 37 I achieved in 2017.  And don't forget 5 pre-emptives, many of which I will tell you about on Wednesday.

What makes it all the more pleasing is that I never felt like I was pushing myself hard at any stage.  No time off work, no outlandish trips or successive drinking days.  Just making the most of the Boozy Bank Holidays, Thirsty Thursdays and Super Six Saturdays.

My favourite stat of all - my 40th pub last year was achieved on 22nd May at the Hawkley Inn in rural Hants, amidst yokel tales of muck spreading farmers seeking revenge over adulterous landlords!  So I'm feeling pretty ahead of the game.

I completed two more counties to take my tally up to a (still pathetic but I am sort of still a newbie, honest) THREE.  First South Yorkshire fell after sterling efforts from Christine Taylor ....

And then, despite some opening times misery, the Alexandra Hotel in Hull fell to help me get a full East Yorkshire set .....

But before I become too self-congratulatory, and whilst we are talking of Eddie F, hold your horses BRAPA!   Eddie alerted us to an admin error from CAMRA ('impossible!  CAMRA don't make mistakes!' I hear you say, but keep reading) which means that a pub called the Jolly Tap in Wakefield should've been in the book, but isn't! 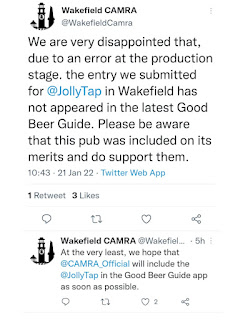 So have I not completed West Yorkshire?  Ugh.  Pub ticking, I wouldn't recommend it!  If it doesn't get you physically, it'll start affecting you mentally.  I can't sleep at the moment, I see little Jolly Tap's laughing at me whenever I close my eyes.  Then I need to get up and go for a wee.
How do you pick the best pubs of the month when the standard has been so high?  Well, firstly, you qualify it as 'pub experiences' so no one can criticise you for choosing a Marston's boozer or foody-ish pub on the Scarborough Road ahead of Burton's famous but very heaving Devonshire, half hope no one reads this blog, and cross your fingers.
1. Dawnay Arms, West Heslerton
2. Royal Oak, Barton-under-Needwood
3. Prince of Wales, Chorley
4. Craven Arms, Birmingham
5. Alexandra, Hull
In a weaker month, I could put the next best 12 into the reckoning too.  Stuff like anything on NYD, Wellers and Boat & Horses in Newcastle-under-Lyme, the Dobcross Band Club, Phoenix in Brinsworth, the Spoonsies in Rugeley and Cannock, and plenty more, deserve honorary mentions.
Mascot News

Colin had his quarterly wash, but it has been commented on that his 'white bits' are a bit less white than they used to be, and we'll just have to accept he's getting a bit long in the tooth.  'Would you consider getting another Colin?' asked Mummy BRAPA.  No, cos he'd be an imposter.  Colin will have to get drunkenly left behind in a pub, or totally fall apart, for me to replace him. 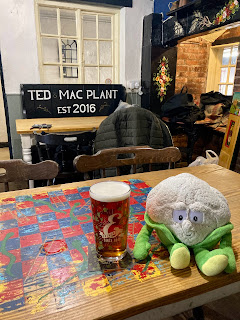 Even more worryingly, Keane Lewis Otter (KLO), who has become such a staple of Thirsty Thursday's and filling in when Col is absent, nearly had to leave us.  Yes, with Transfer Deadline approaching, Brentford kept increasing their bid for Keane Lewis-Potter ..... 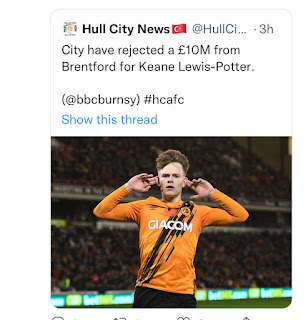 Luckily, our new owners stood firm (at the time of writing, but still not 11pm!) but had the Allam's still been in and not out #AllamOut, they'd have sure as eggs sold him by now, and KLO would need to be consigned to BRAPA history.

Now, being Deadline day, I am denying rumours I've put an 11th hour seven figure bid in for any new signings ......

It wasn't planned like this, but the furthest south pub I visited in January was the afore mentioned delight that is the Craven Arms in Birmingham ......

And yet, I look at the BRAPA agenda for Feb and EVERY Saturday is in the south of the country.

A shame for Staffs, where we've made great progress of late and isn't too many trips away from completion, though there's not a lot of 'easy' ticks left ..... 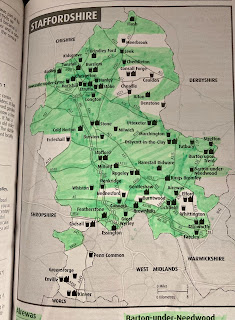 It's those 4 pubs in that little dangly bit at the bottom which annoy me most.  Can't we just divvie them up between West Mids, Worcs n Shropshire?   I'm sure no one will care.  As long as I don't call a bread roll anything other than a 'cob', I will get out alive.

The other top county of Jan was North Yorkshire, the BRAPPLE of my Thirsty Thursday eye, not to mention a bit of quality Daddy BRAPA chauffeuring two weeks back.  It now looks like this ..... 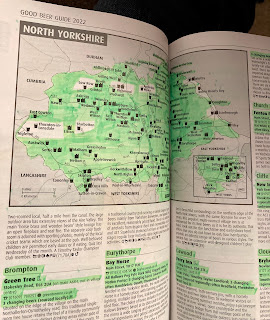 And I will continue in this area on TT's for now, until I run out of do-able midweek options, and then I'm going to move on to County Durham which I've never fully greened before but am only SIX away from.  And then, when spring gets properly sprung, Lancs and GMR will be back on the agenda.
My first holiday of the year begins at the end of Feb, so look out for that one too.  I'm pretty sure the 40 pubs achieved in Jan will be beaten, the aim is to beat the 52 pubs I did in Feb 2019.
Thanks for reading, and remember six pints a Saturday (+ optional ESB) keeps the doctor away.
Si