BRAPA in ..... PARTNERS IN KRYME IN NEWCASTLE UNDER LYME (Turtley Brilliant Stoke Part 2 of 2)

Today was going pretty well after a slow start.  Wellers and the Boat & Horses had earned their BRAPA gold stars, and it was time for pub #3.

Time to negotiate one of the most upsetting underpasses I've ever witnessed.  How we came up in the right place, I'll never know!  Too busy looking at my phone, Daddy BRAPA exclaims "Cowabunga!" or words to that effect, because he has seen this lovely looking building, the Holy Trinity Catholic Church and some time vaccination centre for the insane ...... 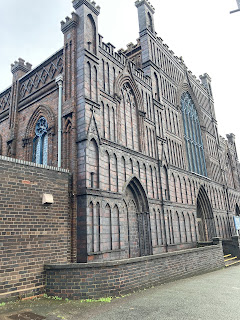 Our next pub was the key one geographically, a bit of a walk, but still classed as Newcastle-under-Lyme though it must have been bordering Hartshill, where our 4th and 5th pubs would be found.  We passed the sort of disturbing street art that makes up 30% of RetiredMartin's blogs ...... 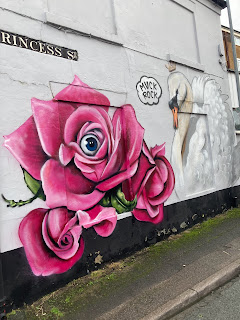 When we see the pub, it is the most quintessentially micro backdrop.  My bingo card would be flashing if I'd brought it.  Set back off the road, next to a tattoo parlour and funeral services ..... 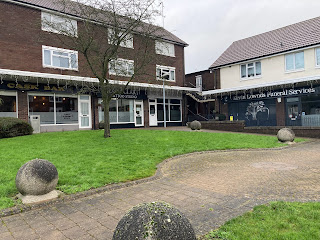 It didn't exactly fill you with the joys of spring, but Daddy BRAPA was looking chipper enough with his trademark smile ..... 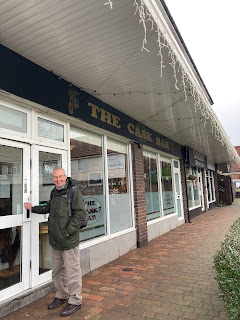 Another BRAPA day, another GBG entry called Cask , this one Newcastle-under-Lyme (2003 / 3566) and at this point in history, I'm assuming there are now more Casks than Red Lions.  In spite of ourselves, we are pleasantly surprised as we take our pints of Thirst Class Oatmeal Stout, served by a very nice bloke, around a corner, perfect for a bit of 'own food smuggling'.  Although Dad is disappointed at the pub's missed business opportunity of having a guest ale on named 'Kevin Lownds Embalming Fluid' he is inspired enough to observe that he feels the standard of micropubs has improved since our early days of visiting them circa 2012.  Ones like this and Wellers, and those we observed on New Year's Day in Blackpool, have warmth, depth and comfortable seating.  This one even has horse racing on the TV.  Maybe micropubs are merging into pubs, and the term will soon be obsolete, the founding father Mr Hillier can be knighted for his services to the pub industry, and we can move on.  Hard as it is for me to watch any horse race without thinking of the Peter Cook / Dudley Moore Derek & Clive horse racing sketch, I'm so convinced the horse called Indy Five is going to win, I refuse to let Dad leave until we've seen the race.  Of course, it finishes nowhere.  And there we go, this pub representing one of the most thrilling aspects of pub ticking -  'expecting it to be shite, turns out (more than) alright'. 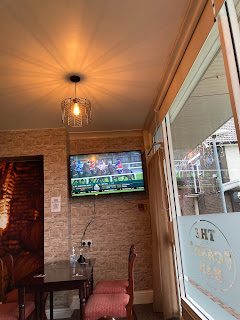 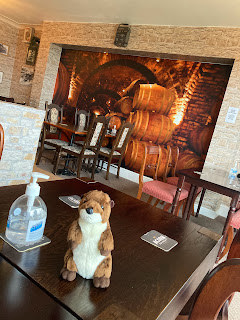 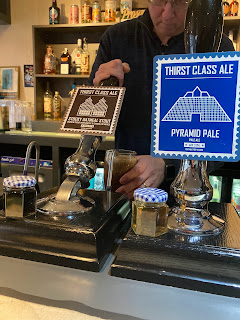 We crossed the invisible border into Hartshill, where the first of two pubs were found on the same road.  The second of which doesn't open til 4pm, so no rush, being only 3:17pm. 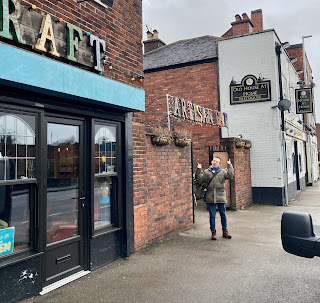 I quite like the look of the Old House at Home next door actually, with its smoking, gurning men in dirty vests scowling at me from the doorway, but the GBG has spoken, and Artisan Tap, Hartshill (2004 / 3567) it is.  A flowery sparkly camp little place, seemingly appealing to the Hartshill Hipster Massive (HHM) which I didn't think existed until today.  If this was the Artisan, the Old House at Home was the Partizan (Belgrade).  Despite having a very different atmosphere from Cask and Wellers, it has an ambience, even if I can't really work out what the tiny birdcages, pink poodles and jokey blackboards are all about.  Not sure the barmaid looks at us once, never mind speaks as she pulls our Oakham Infernos, preferring to be sat at a table on her laptop.  Not exactly April O'Neil.  Call me old fashioned, but I never think its a good look for a pub or bar when the staff are never behind them.  The upstairs loos interest me, I can't quite remember why, I don't suppose it was just the 60p bleach, but it helped.  Paired well with the Inferno anyway, which was my favourite pint of the day. 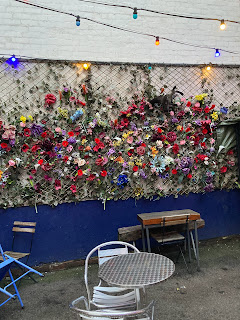 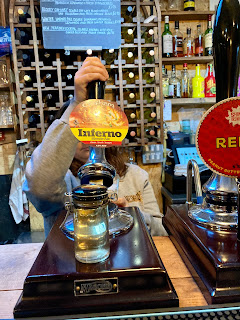 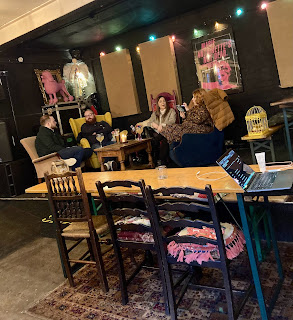 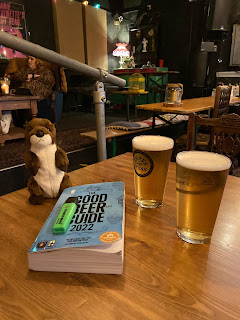 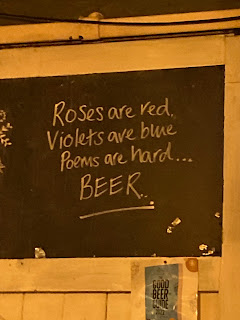 A couple of minutes down the road, we reach our fifth pub of the day.  A 4pm opener apparently, 4:02pm when we arrive, wonder if it is open yet?
Pretty sure it has been open long before 4pm, considering the amount of folk nicely settled down with pints and various lesser beverages at Sanctuary, Hartshill (2005 / 3568) .  Daddy BRAPA was totally in his element, instructing me to get him a Bailey's Hot Chocolate with cream and marshmallows, and when I turn around to bring the drinks over, he is already making friends with a group of locals, encouraging me to give them a BRAPA beermat/card/badge/sticker/bottle opener (you know, just the usual type of 'merch' I bring along if I remember!)  He even enlists the closest lady to do the highlighting, we'll call her Donna Tello for the benefit of this narrative.  Dad has also suggested that when I complete a page of the GBG, I put a little green mark in the top right hand corner, but then quickly adds "you probably feel you have enough to do!" when he sees my pained expression.  The Fun Sponge is drinking well, but I do feel like a bit of a fun sponge myself compared to Dad's attempts to 'bring the party!'  Sanctuary is an interesting one, it has so much tat in little cases around the walls, plus weird throes and carpets, it could be quite irritating if I wasn't numbed by the '5th pub of the day syndrome', almost like the world's worst museum.  But the atmosphere is light and easy going, everyone is very jolly, and when Donna Tello and her fellow turtles crawl off, I'm not too surprised to see the HHM from Artisan take their seats.  Nice pub this, in a whirlwind, other wordly kind of way.  I even thought I could see a celestial body in my pint! 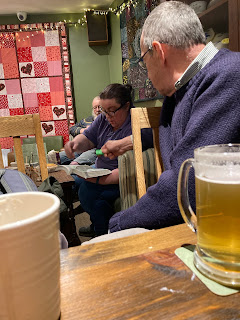 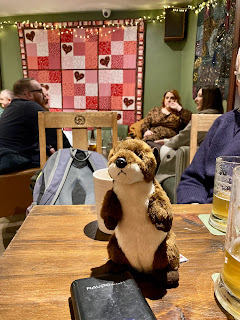 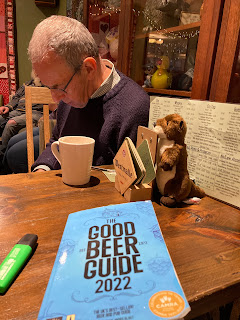 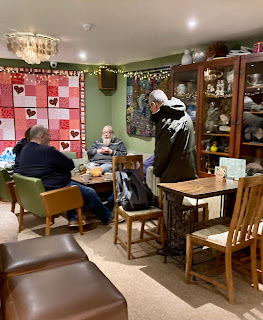 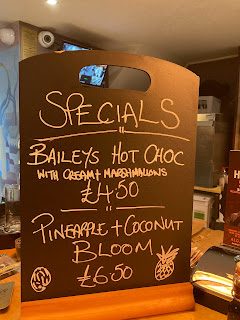 We bus it back to Stoke proper, we've made really good time despite the dreadful start, so one last look at London Road Ale House (2006 / 3569) and we're relieved to see it now open! 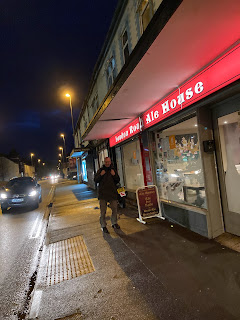 I quiz the staff re the 12 noon opening no-show, and the guv'nor sat at a table behind overhears and turns around to apologise, saying it is now 4pm winter hours but "I haven't had time to update my social media!" Still, the satisfaction of finally getting that final part of the Stoke area greened up after what has taken a massive effort over the past half year is reward enough for any other shortcomings. 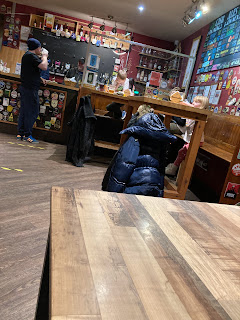 On the train to Manchester, I come over all woozy, and I can only think I'm having a bit of an off day combined with drinking beers in the 4.7%-5.2% bracket rather than the usual 3.8%-4.3% beers (specific!) I aim for on a BRAPA day.  Can make all the difference.
Still, my ongoing ticketing fiasco means we have to cross Manchester on foot to Victoria, so a nice cold bottle of orange squash on a wintry, bracing 20 minute walk, and then a coffee, Christmas cake and lump of red leicester at my favourite little place, Cigar something, and I feel like a new man by the time we get on the train back to York.
Lovely surprise waiting for me when I get home too, as Jane Stuart has sent me her 'unlucky but still good enough to beat Hull City' Blackpool hat, and got herself  a new one, and sent a lovely little letter with it.  Look out for it on my forthcoming winter travels.  SO comfy too, it hugs your head, and I actually fell asleep in it whilst drinking a Glitterberry J20 and watching some Channel 5 countdown programme, Best 100 animated turtle films or something. 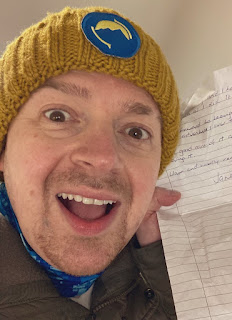 Had been a surprisingly high quality day, massive thanks to Daddy BRAPA, the folk of Stoke and surround, plus some comfortable nicely furnished micros for making all the difference.
I'll be back tomorrow night at a similar time tomorrow to give you all the gen on a Thirsty Thursday in Great Ayton.  Got a bonkers spell of pubby activity from Thu-Tue coming up so am trying to keep on top of the blogs whilst I can!
Til then, goodnight, Si