BRAPA in ..... THAT'S SO CRAVEN : More from The Ruge, Great Wyrley and Brum

With Cannock ticked off, I took the train back to Rugeley where, if you cast your mind back to part one, I'd already done the fantastic Plaza 'Spoons earlier but had failed to notice one of the other required pubs didn't open til 2pm.

Well, as olden days #Pubman Geoffrey Chaucer said during his time mopping up the Mercia ticks in the GBG 1370,  time and tide wait for no man.  It was approaching 2pm, and this pub should be open in a few minutes.

Rugeley still had a worrying gaggle of ne'er do wells hovering around the station, and if you thought I was being harsh on the place on part one, BingeDrinkerAndy off of Twitter, who actually KNOWS,  had this to say ..... 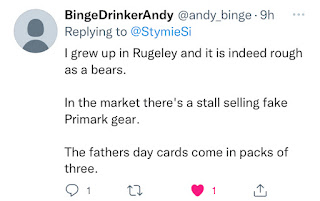 That made me chuckle.  But I wasn't chuckling at 13:55 on Saturday 15th Jan as I realised this pub was a good 20-30 minute walk out from the centre, into the undulating 'burbs, as Rugeley's innards sprawled out like a diseased intestine.   I kind of love the place, but it might not come through in my writing. 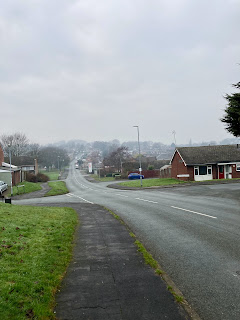 Rusty Barrel, Rugeley (2012 / 3575) is the name, and I put it here before we've even got to the pub because the 'theatre' of the walk there, and location, contributes a large part of what makes it 'special'. The address is ambitiously listed as 'Fernwood Shopping Centre'.  A different take on the shopping centres I normally encounter.  My heart sinks as we get within sight of it as it looks about open as the Raj Takeaway next door. 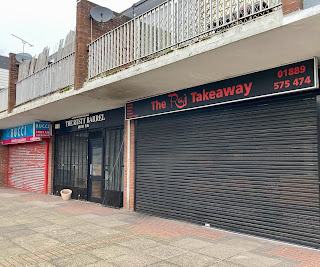 But I push my hand against the door between the metal grates on the front, and to my relief, it clicks open.  A selection of old guys who, in Harry Potter terms, are somewhere between Mad Eye Moody and Albus Dumbledore, turn, raise a skeptical eyebrow, and welcome me into the lair.  They're a jocular bunch, the 'bantz' is strong with these lot, and they are superbly marshalled by the friendly lady in charge.  Conversation seems to be about this part of Rugeley 'going downhill', as various anecdotes of recent crimes and sinister events are recalled.  From a mystery dead body, to fly-tipping atrocities, and THAT burnt out car from a month or two back.  "Anyway .... we can't stand here chatting, we've got work to do" says the most vocal bloke.  'What?' I'm thinking, as he and 3 others sit at the booth adjacent to mine.  They pull out an envelope containing what must be a wad of at least 50 lottery tickets, and then this scanning device.  'Beep!' is followed by 'nope!" about 49 times, apart from one occasion where one ticket yields a £10 win.  The Halfords ale (didn't know they did ale) is drinking well, but the place suffers from the same lack of warmth and comfort that blighted the New Hall Arms earlier, and I think Daddy BRAPA may have spoken too soon last time out in Newcastle under Lyme about micropubs merging into actual comfy pubs.  Still, a fun memorable experience, and I'm glad I witnessed it! 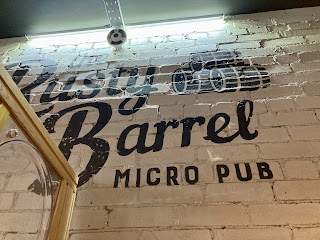 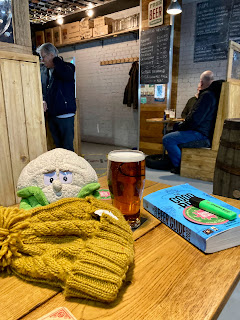 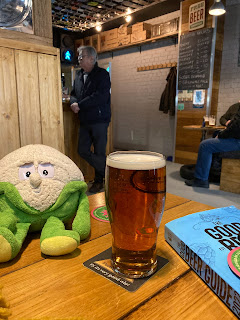 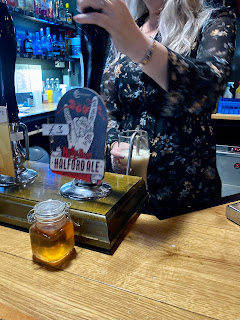 Four pints in, I need to remember to keep eating if I'm to stay soberer than last week, and with a long walk back into The Ruge proper ('stop trying to make The Ruge happen Si, The Ruge will never be a thing'), now is the perfect time to get on my runny yolked scotch egg.

Not two minutes from leaving the Rusty Barrel, I nearly collide with a bloke and make him jump!  I apologise, and he mutters 'okoi moite'.  He is loading piles of children's clothes into the boot of his car.  And then an unseasonable firework goes off close by, and it is my time to jump.

I tell ya, Rugeley will live long in the memory.  No wonder punk heroes Eastfield do a song called 'Rugeley Crimestoppers'.  It seems to make more sense now that I've visited.

Back towards the centre, my final The Ruge tick is in sight ...... 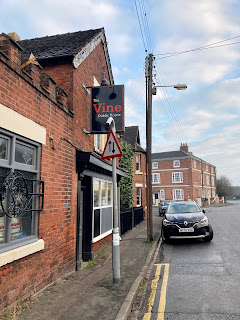 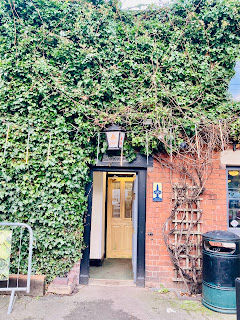 Ah, this is more my speed, welcome to the Vine Inn, Rugeley (2013 / 3576) where a tiled corridor takes you off in all manner of multi roomed directions.  The main bar has a warming fire to the right, and seems to be acting as a focal point for those wanting a quick warm and a way into conversation with the locals.  And it is very local.  And they all have that curious grizzled Rugeley expression.  But they will look you in the eye and chat.  And that is never a bad thing.  They even do their own 'Vine' ales, which I manage to ask about, just for something to say more than anything.  Very nicely kept pint.  My first thought on sitting down is 'how large are the gaps in this handsome bench seating?'  And yet, when I realise I can't find my phone a few minutes later, it doesn't twig I've probably dropped it through the gap!  Must be the 5th pub effect.  "Don't panic' I tell myself, for I can remember taking the above photos.  But the observant locals have clocked my wide eyed look, and when I scan the bar in case I'd put it down whilst getting served, they ask what is wrong, and a couple of chaps offer to ring it.  When someone does, I can see a glowing behind a radiator under my seat, and manage to get my hand in to extract it.  I look up to see the whole pub looking down at me.  I apologise from my hands and knees position on the floor for wasting their time.  Talk about how to make an exhibition of yourself in a locals local!  Their indifference suggests that they are used to nobhead visitors coming into their pub and doing this.  They soon get back to their favourite topics of conversation, like the benefits of diazepam for a good night's sleep.  A baby wails loudly from beyond.   Oh well, at least I feel part of things now and my pub wandering, photos and warming myself on that fire are a lot easier to achieve!  Nice pub. 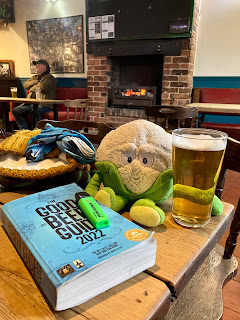 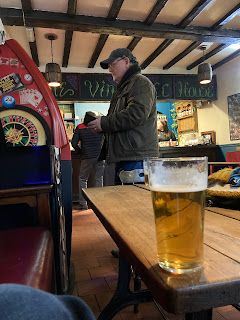 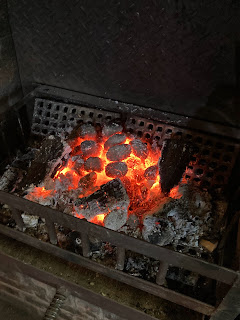 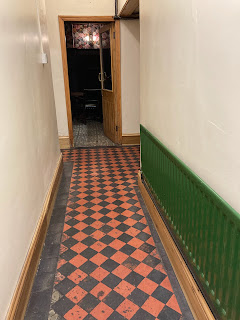 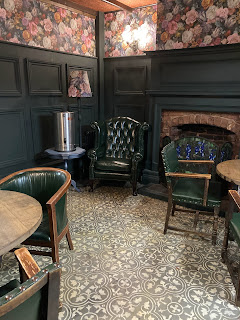 Next, I take the train to Landywood (though the folk in Birmingham's Craven Arms later on tell me it is Ladywood which sounds more correct, so maybe I added the 'n' due to the pub name!) where there is another micropub within a short walk.  Here it is ...... 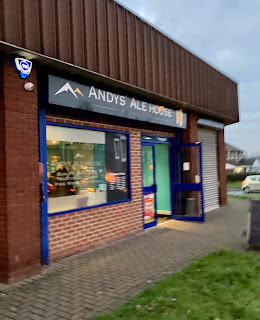 Andys' Ale House, Great Wyrley (2014 / 3577) is the name, and note the apostrophe - it is actually run by two chaps called Andy.  I've finally found a micropub today I can fully get onboard with, nice and busy, a local but not insular atmosphere, just full of happy chappies and lassies, AND may I add warm and comfortable.  A delicious pint of Oakham Inferno for a second consecutive Saturday is just the ticket at this stage of the day, and I plonk myself on one of the lowest flung leather red settees in BRAPA history, quite central to proceedings, having to crane my neck to see what is going on.  One long suffering hubbie has been sent to the bar AGAIN by his wife.  He comes back with two cobs, a small bottle of freixinet and a bag of pork scratchings, and she still doesn't smile.  Some people!  My memories get increasingly hazy, I think a lady started trying to talk to Colin the Cauliflower, and a bloke with long arms and a large dog did a bit of ducking and diving, but it was all becoming a bit of an Inferno fever dream. 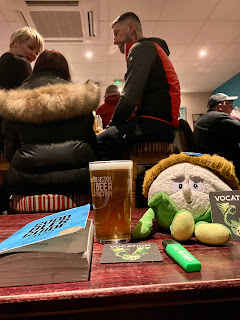 Still, despite my increasingly hazy state, a long drink from my bottle of weak lemon barley on the train back to Birmingham New Street helped me decide that, with time on my side, a 'controversial ' 7th pub tick of the day was definitely something I could handle.  Four central Brums to choose from.

Colmore?  Don't be silly!  Head of Steam?  Hmmm, wasn't really in the mood.  Bull?  Wasn't sure where it was.  Instead, I walked towards one of those 'Si, how the hell have you never been there before' pubs.  It was stood alone, looking sort of proud, sort of lonely, at the end of this road ..... 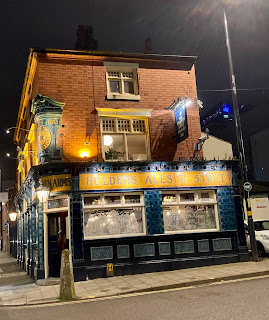 Well, those who'd recommended it to me, and there had been plenty, were not kidding, Craven Arms, Birmingham (2015 / 3578) is a fine, fine boozer.  Understated, just far enough off centre to be more than palatable.  Not one bouncer to be seen.  No anti-man policy (get over it Si).  A square, perfectly formed, self-contained carpeted, cosy, any pub lover surely would have to be a fan.  I grab my pint of something dark and am not entirely surprised to see a total lack of seats.  Just the perfect number of people in the pub.  Though my presence was probably spoiling that.  With my inhibitions gone from my previous six pints, I spy a seat at the edge of this table and am just about to ask this group of four if I can perch on the end, when they offer me it anyway.  The chap closest to me, Darren, has a nice easy ability to talk, so I'm not too surprised when he tells me he is a DJ on Dazzle FM - the Brighter Mix, an online station.  Give him a listen.  His other half, Michelle, is the spiritual type which makes her the perfect candidate to wield the green highlighter.  Their two friends are lovely too, I've forgotten their names, 7 pints, but I did tell them this would probably be the case!  They love the BRAPA idea, and soon are showing guv'nor John my GBG and what it's all about.  I go to the bar and have a nice chat with him, he laments the GBG write-up as not doing the pub justice or being entirely accurate , but at least it seems visiting giggers like Pete Doherty, who once consumed 3 pork pies in one sitting, are also fans of this fabulous pub.  On the off chance you've not been, please do!


So there we had it!  A cracking seven pub day, my Staffs progress is really going great guns now, and if I'm not careful, it'll be fully green before Herts n Hants and that was never in the 2022 script.
Train journey back was fine, apart from the late change at L**ds and 11pm arrival back home a bit knackering.
Join me tomorrow night, similar time when I'll tell you just what the hell is happening in Hull.
Si