Herts is my new 'focus' county daaarn saarf, and despite a couple of unsatisfactory experiences in my early days in the likes of Aldbury and Croxley Green, recent trips to St Albans and Hertford are making up for the slow start.

Today further confirmed what a good county Herts could prove to be, with a selection of generally old, no nonsense pubs, plus a few modern frilly bits around the edges just to keep the day nicely rounded.

Breakfast on the train and look who is back ......

An exhausting Tube trek from Euston to Watford Junction followed.  For a second Saturday running, much of my planning was done 'on the hoof' and it was only coming into Bushey station, that I realised that my furthest pub was an 11am opener.  I quickly scooped Colin, weak lemon drink and GBG into my bag, and jumped off.

Bushey and the GBG eh?  What a head scratcher.  The one pub listed is a good 23 minute walk from the station.  But two listed under Oxhey are both within spitting distance of Bushey station.  Best to negotiate when sober rather than six pints in, I decided.

The 23 minute walk got me to the pub at 10:59am, pub door pleasingly opening and a gurning man already sat down with pint. 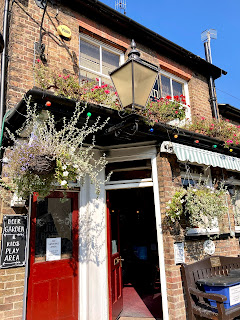 Just as I found in the John Bull at Alnwick last week, today's first pub Swan, Bushey (1956 / 3385) would prove to be my favourite of the day.  The chirpy wiry barman is a lovely bloke, bouncing about in pure September sunny exuberance.  "You travelled far?" he says.  I tell him, not really, just York.  He reckons that's far.  But wonders if my decision to choose Tim Taylor Landlord from Keighley is therefore a wise one!  I assure him it is, Black Sheep not really my cup of tea, bit too early for an Abbot, and Young's Bitter I've found a bit of a wet lettuce recently.  The TTL is a class act here, perfectly kept.  Our barman and local gurner are soon searching around for a rare ancient pub document detailing historic pubs of the area.  They think a pub ticker like me might be interested.  Very good of them, though the constant 'don't lose it, don't spill on it, it is very precious' comments make me almost scared to remove it from the plastic sleeve!  I'm more interested in drinking in the gorgeous surroundings , but I'm then given a framed informational piece on the pub, telling me it is the last unrestored Victorian pub in the M25, probably.  Pumping me with information this place.  No pub is perfect however, and the only downside here was a vile smell, so reminiscent of a silent but deadly fart, I was convinced our helpful local gurner had a problem.  But the fact it was intermittent, no matter who was situated where, made me realise it must either be coming from the fireplace / chimney.  A malevolent spirit, or some blocked drain issue?  If you ever visit, which you should, please sit where I did and see if you experience the same, it really was revolting!   But cannot detract from a classic boozer.


My plan to get the Oxhey duo done next are in tatters as replacement barman, the also very friendly bald chap pictured above with spider web elbow tattoo, has checked with Google to confirm his suspicions, and the Villiers Arms doesn't open til 14:30.  This is the advantage of laying down your ticking agenda to locals in the know.
So I instead get the train out to my furthest point today with the aim of 'mopping them up' on the way back to Euston.
Berkhamstead is that furthest point, home of the Rising Sun or 'Riser', a very memorable pub tick in perhaps the most torrential downpour (joint with Donny '14 and Morecambe '05) I've witnessed in my life, huddled in the tiny porch with five other people because no room inside.

Weather was a damn sight better today, glorious you could say.  Funny place Berkhamstead, always feels to me like the locals are bit smugger than the Things from Tring.  Almost like they take self-reflective glory in their pretty canal.  Not quite Stamford levels of puke-inducing-self-satisfied-sycophantic-left-handed-fellatiary, but still, it has that slight edge to it.

Our next pub too, managed to be both excellent and hugely frustrating at the same time ...... 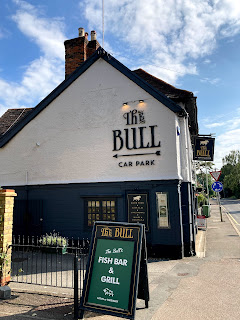 No entrance through the front door at the Bull, Berkhamstead (1957 / 3386) so up through the back decking, where a small gathering of ladies with rings on their fingers, and men with bells on their toes, were tucking into scran from the famed 'Fish Bar & Grill', honking like posh Herts sealions.  Am sure a couple clapped too.  Once inside, I'm asked to sit down.  "It's still table service, we feel it works better here", I'm told by the fantastic barman who gives the bloke in Bushey a run for his money for 'staff of the day' award.  An old bloke with his wife later questions the lack of bar service, to which he's told  "well, you can come to the bar for the theatre of it if you like, as long as you then sit down!"   The ale is superb, K9 by Tring.  There is a fabulous old jukebox, but the pub has been far too modernised for my liking.  "Where's your pool table gone?" asks a lady who hasn't visited for a few years.  He tells her it was a nightmare to clean and maintain.  She glances over her shoulder, as wistful as one could be.  A couple at the bar spy this posh Tequila vessel called 'Azul', a real pub centrepiece, and looking online, wow looks more like an 'event' than a drink.  But for all my frustrations with this place, the guy is so nice to me (and Colin), and you can tell the pub is ran in such a professional way,  to suit the Berkhamstead crowd, I find it hard to be overly critical.  Brentford have about twenty goals disallowed in 10 minutes at Wolves, as a group of six codgers come in very slowly.  Good luck getting this lot not to hover at the bar I think, and sure enough, it becomes an impossible ask, especially as most of them are deaf as posts!  Good place, you'll be well looked after if you come here. 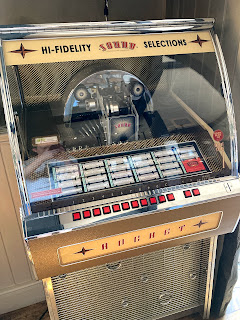 Time to leave bootifil down town Berkhamstead, and make my way back down the train line.

VERY EXCITED next, a trip to a place I'd never ever been to in my life but had heard a LOT about, Hemel Hempstead.  Whoop-the-doop.

Well, it isn't Berkhamstead.  Or Tring.  Or even Watford.  Feels a bit like getting off the plane at Barcelona.  I think that is a more favourable comparison than Slough or Milton Keynes which'd be obvious and lazy.  I crossed the road and a lovely old bloke gave me a 15 minute diatribe on Hemel's pub history.  I only asked him if the next bus would take me to town cos I had one to visit!

Off the bus, and a few people smiled, which was nice.  I turned the corner which opened up into the vast sparse empty space with shopping precincts around the side.  I suddenly felt a bit depressed.  Where was Amble-by-the-Sea when you needed it?  But the sight of a new pub always lifts the heart by at least 0.01%. 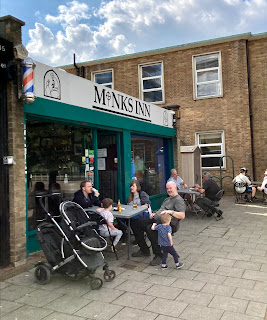 I panic on entering Monk's Inn, Hemel Hempstead (1958 / 3387).  All I can see is cider!  Six handpulls of it, and a blackboard confirming what I can see.  "Do ... do you do any 'cask' beer?" I simper, all pathetic like.  Our landlady points to six handpulls, all behind the bar.  So a cider 'forward' pub then?  I also spot three big barrels of ale on gravity.  I'd probably have gone for that had I seen them sooner.  Well, the owner seems a right formidable character, she calls me 'luv' or 'darling' or something but I bet she takes no nonsense from any Hemel naughty boys, and I suspect Hemel has more than its fair share of them?   The lady to my right wants a 'cider' recommending.  Something not at all dry, something blackcurranty.  She's given something that tastes just like Vimto, and she approves.  Cider?  Bit like craft beer innit?  I notice the "no card payments under £10 sign" and ask if it is telling me the truth.  Both ladies confirm my fears.  I feel like I'm kind of in a conversation now, but it is one of those where neither are really talking directly to me, yet you suspect, if this was 'up north' I'd have been right in the bosom of their Herts by now!  Oh well, I retire to the far wall, and drink my pint (less fresh than most today I have to admit) and I think that is about it for my HH debut.  Sure I'll be back before 2043. 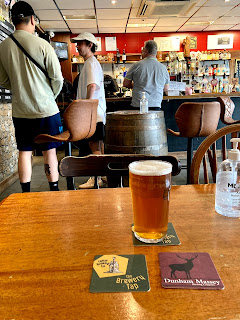 I tell you about my final four pubs in part two, maybe tomorrow, maybe not, in hazier detail of course.  I'll leave you with me standing at a bus stop in Hemel Hempstead where my phoned has just pinged to say Duncan Mackay is watching lower league German football.  These NHS Apps ain't what they used to be.