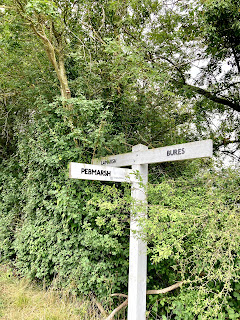 The day of reckoning was finally beckoning, when I could wield the trusty green Stabilo on Essex for a final time in the 2020/21 season.  I was prepared for the extreme amount of walking that today entailed, actually feeling like it would be nice really work for it than being chauffeured around like Queen Latifah or something.

An early start from Liverpool St took me to Marks Tey (where?).   I changed onto a much more characterful train bound for Bures, pronounced 'Byurrrs' according to the automated announcement, but 'Bue-ers' according to a landlady in a Sudbury pub later on.

Three pubs to go, only one was tres difficile, so best to get that done first whilst feeling bright, shiny and sober.

Four miles it was, I managed it in 61 minutes, and it would've been quicker if it wasn't for those pesky motorists.  Not much traffic, but one bloke going too fast had to brake suddenly, and a smoking old lady stopped to make sure I was alright, which was nice.  A very peaceful uneventful and undeniably North Essex roadwalk otherwise. 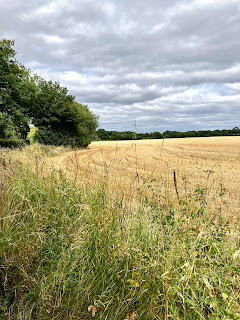 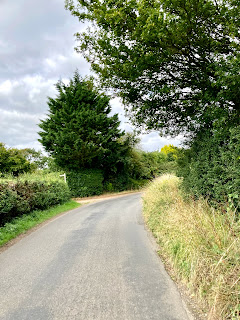 It gave me time to reflect on my Essex progress over the past year, picking a top ten in my head, and remembering 'where it all began' on 19th September 2020 sitting outside the Crooked Billet, Leigh-on-Sea, which was binned from the Guide a month later.  Typical!   Still, less than a year to completion, well done me, eh?
I suppose technically technically (so technically, I've said it twice), my Essex ticking of the 2021 GBG began on 22nd Jan 2002, when Dad and I visited Southend's Last Post Wetherspoons in our quest to prove their was life after the excellent Cork & Cheese.  A chilly Tuesday night, a rubbish 2-0 defeat, when you put it like that, nearly twenty years to complete Essex.  Rubbish Si, boo.
I stopped daydreaming as the village church came into view .....
Followed, with an air of village inevitability by the pub just around the next corner ..... 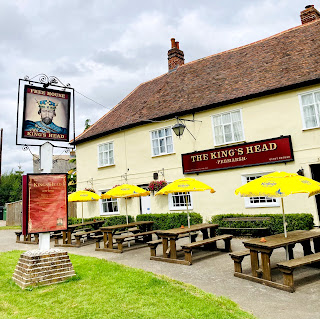 Imagine if it'd been closed?  Doesn't bear thinking about!  Finding an open pub would prove the highlight for me here at King's Head, Pebmarsh (1930 / 3359) which had a warming deep red colour scheme which just saved it from being the drabbest pub of the weekend (that'd be Steeple B yesterday).  Despite a sleepy Sunday post-lunchtime lull, service was slow.  Everyone blinked a lot before asking what I wanted to drink.  When I heard the barmaid closest to me was called Izzy, I was tempted to say 'Izzy Wizzy Let's Get Busy' and although I meant regarding service, I was worried it could've been misconstrued.  I plonked myself on a red leather armchair near the bar, the majority of the pub was more restaurant, opposite Chris, a dining local with a crooked smile and a slightly over zealous manner when demanding salt & pepper and condiments like he was Lord Muck.  I knew putting Colin on the table would spark zero reaction too, depressingly, it was that kind of pub.  All a bit 'too professional' if you know what I mean.  I know 'saved by the community' pubs are supposed to swell pub lovers hearts and groins with pounding joy, and better any pub than no pub at all, but so often I find them over priced, a bit distant and too safe with the decor.  Never mind, it was ticked, only TWO Essex pubs remain. 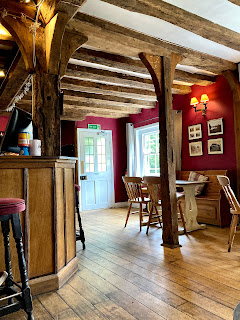 Time for the long, long walk back, in the direction of Bures but with a slight detour through the village of Alphamstone to keep the route interesting, to the village of Lamarsh.  They love their marshes around here.  Fields full of sunflowers that were past their peak, an Amazon deliver driver who passed me about five times, and a fleet of taxis which made me wonder if I was mad to do all this on foot. 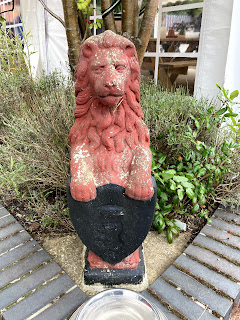 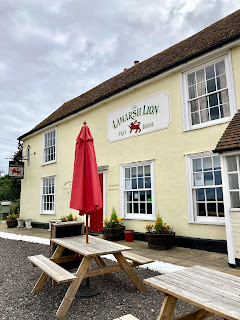 The Lamarsh Lion, Lamarsh (1931 / 3360) was a definite step up from the King's Head.  A games room at the far end with pool table and dartboard gave an indication of pubbery, but in many ways, even that felt like a bit of a concession, the pub as a whole still a bit too 'nicey nice'.  What made all the difference was the welcome, a heavily eye-shadowed landlady who looked like she'd been here for centuries wished me 'good morning' in a slightly disconcerting manner.  Her army of elfin helpers were a lot smilier and switched on than their Pebmarsh counterparts, proof that they aren't all hatched from the same gastro pod (and quicker than the snails of Pebmarsh too, get it?  Gastropod, thanks).  "See what I mean?!" landlady says to a chatty local lady sat down below as I order the Silver Adder.  I enquire have I missed something, she reveals everyone is ordering this ale today.  "Good stuff" says husband, the only time he is allowed to speak.  "Is there an actual snake called a silver adder?" I ask, determined to get some top banter going.  But it quickly peters out as Hatchling Katie has interrupted because table 8 want some mayonnaise.  Damn table 8!  I perch on a central pillar, behind a post, which doesn't help my outlook.  The local lady wants to bring back the strict no swearing policy this pub once had.  Fuck that, I muse, quietly.  Lycra Sudbury cyclist bulging in all the wrong places asks Ms Eyeshadow how business is.  "People tend to be arriving early, but leaving earlier too!" she sighs.  I spy an opening hours blackboard.  "Sunday : 12 noon - 5pm" it says.  Well I think I've identified your problem Ms E.  My cue to leave is a gaggle of young ladies arriving with a 7 month old French Bulldog which drinks a lot of water.  The Hatchlings coo over it.  I down the dregs of my excellent Silver A. and leave post-haste. 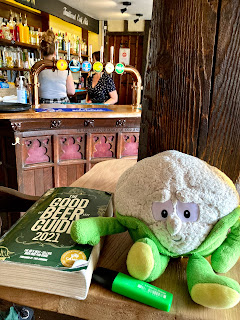 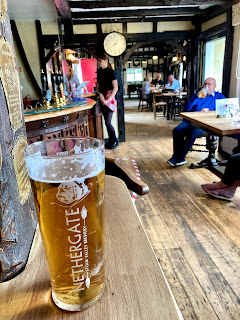 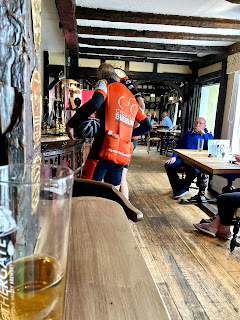 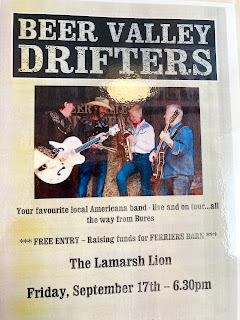 The mile and a quarter mainly downhill walk back into Bures seems a walk in the park after recent trials, though my legs are sore, and being suspended on an unnaturally high posing stool in that last pub did nothing to help my circulation!

But no time to complain, this is it, the moment we've been waiting for, final Essex pub ..... 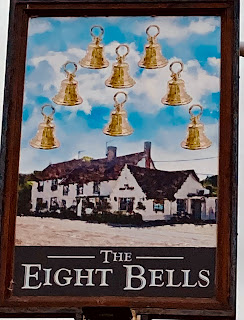 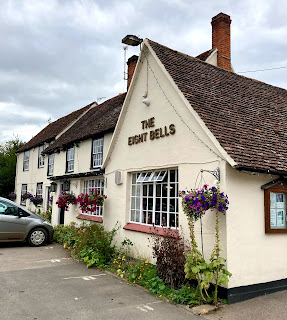 Eight Bells, Bures Hamlet (1932 / 3361) was like a greatest hits of Essex pubs, a fitting way to end after two distinctly un-Essex predecessors.  As I walk in, a bloke has ordered four bottles of Corona to go.  They have to put them in a paper bag for him.  Of course, the ale on offer to me is Woodforde's Wherry,  It practically sponsors BRAPA Simon Dewhurst Car Days.  If Martin Taylor did a bingo card for 'proper pubs', it'd be a full house here.  Blind Sooty charity box.  Scampi and Bacon Fries.  Old men saying ridiculous things, whilst eyeing the 'visitor' in a slightly distrusting manner.  Why so many bottles of Sarson's Vinegar about?  Must be an in-joke.  Hopefully not one about their beer quality.   There are ten minutes of peaceful solitude in this traditional boozer, until the door goes 'crash', and a local called Dave (who people suspect may be on substances other than beer) comes in proclaiming a great idea for a pub theme day, one where everyone has to wear swimming trunks.  Landlady Sarah is a wily old crow, and takes no prisoners.  "I'm reading my book and not listening to you" she barks.  But she was.  He tells everyone he once got arrested in Gdansk.  "I used to be a spy".  The locals roll their eyes.  "You don't look much like a spy" says Old Man 1.  "Well, if he did, he wouldn't make a very good spy would he?" replies Old Man 2.  Dave asks who the coolest man is in the world.  Clint Eastwood gets his vote.  Old Bloke 2 says "well, the local Greene King rep who comes in 'ere is six foot eight".  This is too much for even Dave, who leaves via the garden to many sighs of relief.  The perfect way to end a wholly satisfying county. 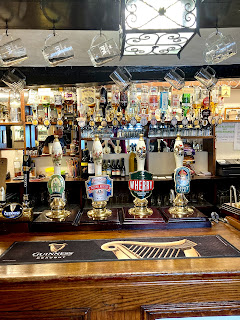 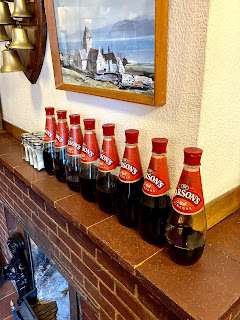 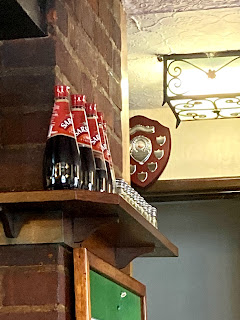 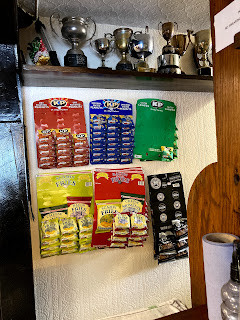 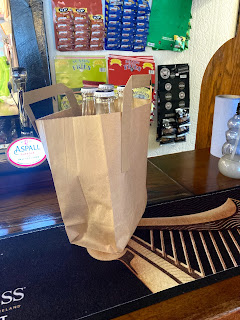 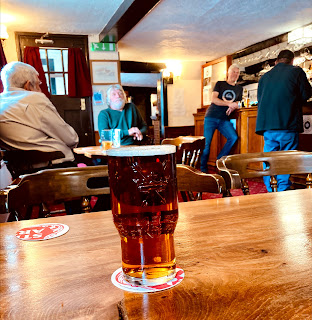 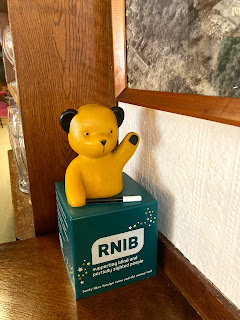 I leave so I can sit on the station early, have a few snacks and a bottle of water.  Hard to believe I'd only done three pubs today.  Three to go, where would I end up?  I might've given it away.  See you tomorrow for tales of that.