BRAPA in ..... HANDPULL IN AMBLE : ANOTHER COCK & BULL STORY

The wheels on the bus went round and round, as is their prerogative, and before we could blink, we'd left Alnwick and were in Alnmouth, and isn't it interesting how the 'l' in Alnwick is silent, but in Alnmouth, you have to make the effort to shoehorn it in?

Coastal tourist town.  The pretty and narrow main street sloped uphill, every other building seemed to be a pub, just as nature intended.   Well done Alnmouth for keeping it olden days.

The first 'sign' that all might not be sweetness and light at the one GBG entry in town, was indeed, the 'sign'.  Now I don't know about you but any pub called the Red Lion, should surely have a lion logo, or at least a semblance of redness.  Instead, an insipid pale green was about to sum up the pub.

Red Lion Inn, Alnmouth (1952 / 3381) and my main gripe is not with the pub, which is a nicely appointed dark atmospheric residential thing, or the ale quality, a second excellent Rigg & Furrow of the day, but the staff.  Three barmaids, we are the only customer's indoors, and they don't even acknowledge us.  Simply talk amongst themselves.  This for me, is when poor service actually crosses the line into out and out rudeness.  Yes, I know in these tourist hotspots, there are so many customers who are probably off-hand, and more concerned about their pinot grigio being chilled, and their sea bream being griddled to perfection, but there are still a minority of us who expect at least a pretence at good service.  That killed whatever atmosphere the pub had, and within five minutes, we are restless and decide to sit outside on this wonky old bench in the glorious September sun, putting us both in mind of our (superior) trip to Firkin Alley in Barnard Castle.  I can see beyond us a huge garden area, full of lunchers.  I like to think in the window behind us, a 90 year old woman is living in a cottage, wondering who these interlopers are, though I think that it just my mind trying to make the experience more interesting. 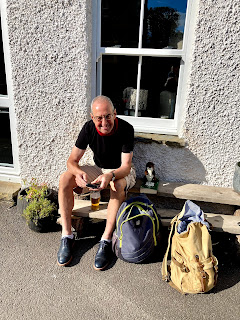 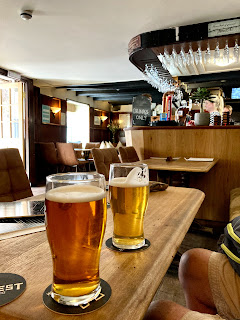 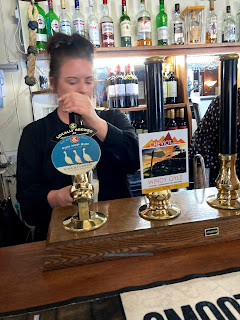 Another short bus ride took us to Amble, or Amble-by-the-Sea as they sometimes call it to distinguish it from Amble-incredibly-well-Inland, and that is a BRAPA fact.  Not a real fact.  But a 100% pukka, bona fide honest guv BRAPA fact. 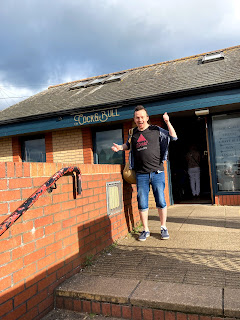 My enthusiasm was justified, and it was the return to form that the critics (me and Dad) had been demanding with truly canny North Eastern hospitality at the Cock & Bull, Amble (1953 / 3382).  "Me and yer mother just parked over the road, and I never even saw this place" exhales Dad in a breathy way.  True, it does look a bit like a health centre, think Pepper Saint Ontiod in Crossharbour, East London.  But once you are in, quite the homely little micro.  A little tablet is propped up on the side of the bar, and barmaid and assembled locals are peering at the football.  I catch a glimpse of the score.  "Oh dear, not poor Newcastle losing again?" I say in the most sarcastic way ever.  A lady leans across, proper egging me on and loving it, definitely a Mackem.  Seems rest of them are all scowling Loony Toonies.  Ooops.  Time to backtrack.  "I can't talk, I'm a Hull City fan" I say.  "Yeahhhh, you can't talk mon!" they chirp as one.  ALRIGHT AMBLE, NO NEED TO AGREE!  I take our pints outside, a very nice backdrop, Dad still remembering his past visit here.  A trip to the loo proves equally fruitful.  "Is this the queue?" I ask a lady loitering.  "Aye, a bloke's been in a while" she says.  "Might be having a poo!" I reply cheerfully.  She turns to face me head on with all the outrage of Spuggie off Byker Grove.  "HADDAWAY MAN!" she exclaims.  At that moment, 'Fraser' comes out of the one unisex loo, worst thing about micros?  No sign he's done anything other than an innocent widdle.  Back with Dad, time to look up bus times. 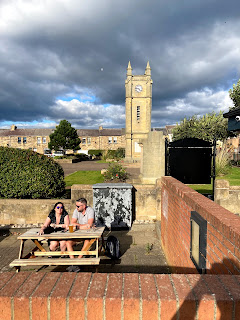 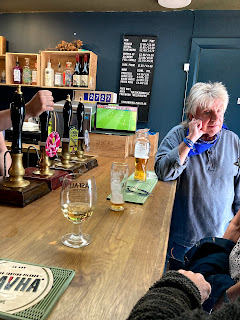 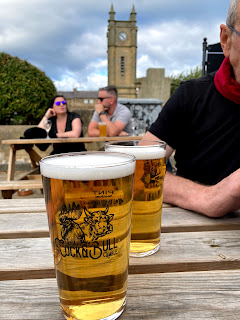 The final bus ride of the day is the longest too, but essential to get us back on the train line south.  What a time then to lose my day bus ticket, and absolutely typical of me after 5 pints.  I found it on Sunday morning of course, scrunched up at the bottom of a pocket I never use.

For now though, I have to shell out an extra £6 (ugh!) and Dad alerts Mummy BRAPA to the fact that he's going to be home later than expected, no supper for you Bernard! 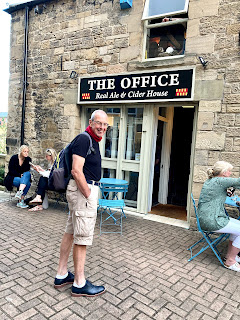 And it is absolutely heaving here at Office, Morpeth (1954 / 3383) and even with a group of blokes leaving at the moment I arrive (one of them even says 'plenty of room mate!' to me), it is standing room only, and a quick recce of the upstairs area shows it is also full up there.  No option but to sit outside again, on that table you can see right outside.  Very friendly place though, and as I shout through the crowds "Black Hag please" everyone at least does turn around and take note!  Because I'm kind, I return two minutes later to find where the loos are for Dad, bumping into a garrulous young Peter Beardsley in the process who talks me through what is expected of someone visiting their pub toilets.   Fair to say Keane Lewis Otter isn't really being accepted as a replacement mascot for Colin by the Twitterati, sad but understandable, I break the news to him he's unlikely to ever return, for which I get bitten.  It's all a bit like on South Park when Mr Garrison tried to replace Mr Hat with Mr Twig.  Great analogy.  To reinforce the sheer volume of folk, a trio of women make their way outside, seeing no seats, lean against the far wall, but the landlady comes out to tell them off for standing there, as the pub doesn't own that space!  With a chill wind blowing, Dad is getting restless, so he goes off in search of a coffee shop.  It is a fruitless exercise (he didn't find a coffee either, haha, sorry), but even with time to spare before the train, he feels it might be nicer if we moved somewhere a bit warmer!  I totally agree it isn't so comfy here.  So I drink up and we move on.
So we 'amble' in the direction of the station, happening upon a very vibrant Saturday night "boom boom boom let me hear you say wayyyo" kinda place.  It is called the Black Bull, I guess we're all pre-emptive ain't we, and we actually do quite well out of this.  A nice polite barman gets Dad the coffee he's been craving, more importantly I get a very well kept pint of Anarchy, I think Doom Bar was on too but it wasn't the time for heroics.  And we perch on a side ledge and it is not at all intimidating, too much space for that, just a pleasant note on which to end. 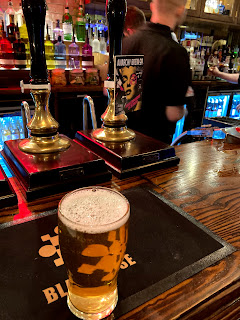 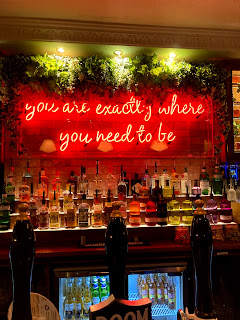 Luckily, the Morpeth - Newcastle - York part of the day went very speedily, David Speedilie, you could say, it had been a really top notch day, and it whets my appetite for a potential 2021/22 completion of Northumberland, and reminds me, I really should get back to Cumbria too.  But let's not get carried away.
Join me same time tomorrow night, for tales of THAT Sheffield pub that got away.
Si