Celebrate good times come on!   60 Good Beer Guide pubs visited in the month of July proved to be a BRAPA record, beating the 59 set in September 2018, and whilst my chubby tummy and groaning liver might disagree, it is time to pop the red wine corks and open the Wotsits on a job well done.  Throw into the mix 5 new pre-emptives  (albeit two of those were non-cask venues) to make it extra remarkable.

Oh, and I will catch up with my blogs.  Eventually.  It's just gonna take me til Christmas.

July started in Saffron Walden, with a woman talking about stamping on a dying slippery pigeon's head, and it ended with a bloke from Hitchin called John showing me his photos from the 80's.  Pub life is the most colourful life, and I like to think BRAPA brings the party, not that #BRAPARTY would ever really work as a hashtag.

With the 2022 Good Beer Guide only a couple of month away, I'll probably be falling well back towards the 1700's again, but what with the unprecedented last 15 months, I gotta take it on he chin with a stiff upper lip and broad set of shoulders.  Or something.  Fun days, good experiences and weird wordy blogs is what keeps me 'ticking' over.  If I live to 120 years old, I still reckon finishing the whole book is achievable! 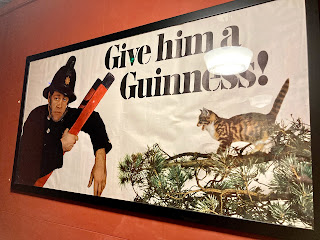 Rather than get too bogged down with the bigger picture, I'm learning to 'pick on' a couple of counties at a time, to set myself more achievable short-term goals.

Durham is proving a right royal pain in the bum, I've been close for so long.  Just three to go as we stand ..... 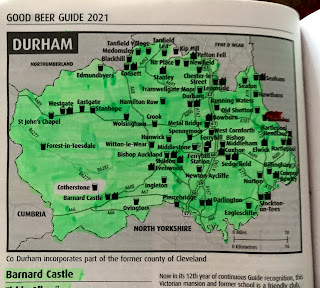 Of those three, I've crossed through High Hesleden as the guv'nor is unwell so they haven't reopened yet.  Get well soon guv'nor!  Crossing out a pub IS a gamble, I did the same in Essex's Newport, only to find it had reopened after all, and the rumours of takeovers and long term closure were false!  It was simply all about social distancing rules.

Kip Hill is on my agenda, a bus ride from Newcastle, twins better with Tyne & Wear/Northumberland ticks.  And Cotherstone, well it has reopened finally, but the hours are so cruel.  The only day it opens before 6pm is Sunday (3pm) and that is the day there are no buses.  Proof that god hates BRAPA.  I think ultimately, that'll mean Durham defeats me before the 2022 GBG lands. 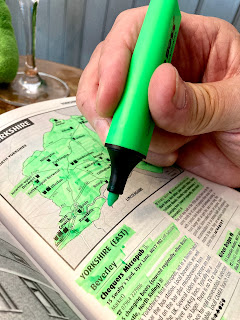 The highlight of the month (apart from 19th July happening of course, which has been fantastic!) was when Daddy BRAPA wielded the famous green Stabilo in the direction of East Yorkshire during a sweltering afternoon in Yorkshire Ales, Snaith which I'd only not achieved sooner because CAMRA put it in the wrong county previously!  Okay, so pouring ice cubes into the remnants of my ale to cool it down was a disastrous move in the same pub, but you can't win 'em all.

I've completed the West Yorkshire section in every GBG edition since 2016, and in 2015 I only fell one short not managing to get the Muse, Wetherby done in time.  So as you can imagine, I'd love to get that one chalked off again.

A great day around Halifax lit the blue touch paper (if that is the phrase)....

And what with my Thursday night afterwork specials, I now find myself just 4 pubs away so that is an aim for August - Pontefract, Thornhill Edge, Horbury and Horbury Bridge, you can't hide forever! 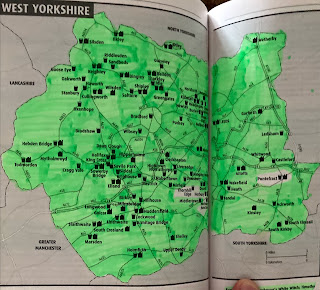 All this means South Yorkshire has been a bit neglected, save for a great tick in Hatfield.  Barnsley & Sheffield are very much on my radar for after work trips once West Yorkshire is bottomed out, the awkward one is Hoylandswaine Sports & Social Club, which last I saw, still wasn't admitting non-members. 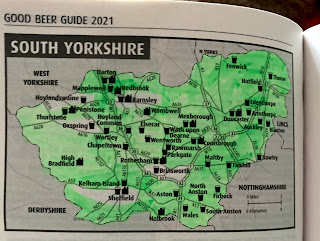 The county I've put most effort into in 2021 is Essex and I'm constantly wowed by the quality on offer.  I continue to make great progress, thanks in no short part to firstly Martin Taylor, and then Simon Dewhurst for their help getting me to some of those harder to reach round the rim Toilet Ducks of pubs.  #Pubmen of the month.

Last month end, I talked about starting Glos & Bristol next.  However, that's a tough county and although it'll need doing eventually, Hertfordshire is a more natural successor to Essex.   After all, Simon D is local to East Herts, and a nice chap called Coxy says he might help with some of my middle county tricky ones (Darley Hall?  Wild Hill?  St Paul's Walden?  Surely these place names are made up!)  And then you've got John Depeche Modem, rattling around the Hitchin area in that rattly way he does.

The lowlight of my month was beer quality during that really hot week.  As a wise #pubman (it rhymes with Cold Budgie) said, keeping cask beer cool is the true test of cellarmanship. I've never had a pint of cask as warm as in Redcar, GBG debutants in Brough and Cottingham similarly struggled.  All three were very beer focused places too.
It happened on the hottest day of 2020 in Boundstone and Wrecclesham (Churt and Upper Hale kept theirs exceptionally well on the same day, so no excuse) and both pubs kept their places in the GBG.
By Bishop Auckland, I was even taking a local's advice to go with John Smith's Smooth rather than the one cask which had been on 4 days in extreme heat.  I think it was a good decision too!
So there we have it.  August won't be as productive, but that's perhaps not a bad thing.  Hopefully the month end bank holiday will put a bit of gloss on it.
Take care all, and thanks very much for reading.
Si