Hertfordshire moved up to 30th place in the BRAPA Hits Parade with a comprehensive six pub demolition of St Albans last Saturday, leapfrogging the likes of Staffordshire, Norfolk and Isle of Man in the process.

It was also the first time GBG pubs have been ticked on 21st August, meaning there are now only 12 calendar days in the year still to tick on. #BRAPAStatsYouDidntNeedToKnow

And breaking news coming in as I write this courtesy of Duncan Mackay, the 2022 GBG has been deferred until 12th November  (25th Oct for us Privileged Clubbers), 2581 pubs to tick in two months?  I got this.

It was a Boyzone/Cat Stevens special (Father & Son day), and my third pub visit to St Albans, 'home of the CAMRA' although I'd only achieved one pub on each occasion previously!  First up, an overnighter in Lower Red Lion in April 2006 where Tom's Dad forgot to tell us there was a beer festival on.  Playing Trivial Pursuit at 1am in the bar against a weird know-it-all was a hazy BRAPA highlight of my past.  Dad could not touch a drop of ale in Watford the following day.  Not that Watford DID ale back then.  And 10 years later in Jan '16, I popped into the Garibaldi late on to celebrate my final Bedfordshire tick. It seemed nice.

Both pubs remain in the GBG.  That is what you call long term BRAPA success stories.

But today I could attack it properly.  Before 11am when we arrive, oh yes, it rhymes with Feathergoons. 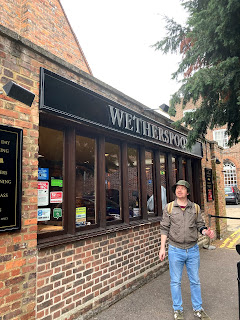 Spliced together from two old timber barns previously situated elsewhere in Herts, you are thinking 'crikey, talk about making it hard for themselves, what's wrong with reconverting the local church?' as you walk in to Waterend Barn, St Albans (1914 / 3343) , but the barny effect is real, and makes it one of the more aesthetically pleasing Spoonies out there.  It's all about that beer though, as our Decca is 'on the turn'.  Not total vinegar, but showing all the signs.  Buoyed by my successful pint return in Polka Hop two days ago, I march back to the bar with confidence, but this time, when the 'appointed ale guru' holds it up to the light, he looks thoroughly unconvinced.  No one tastes or smells it, true it looks good, but surely you can't always tell from sight alone?!  Barmaid, who'd previously been friendly and chatty with the two of us, is icily stoic as she pulls our replacements, which are great by the way.  No intention of turning the Decca around either, sad to say.  Wonder how many more complained before it got removed?  I can see the staff talking about us and monitoring our expressions.  I guess having a Good Beer Guide on the table maybe works in this situation?  At least I'll never have to return!

Despite having SEVEN St Albans pubs still to go at, the BRAPA mindset is always 'get a difficult outlier' ticked off if time allows.  11:30am.  Time allows.

Onto the bus we hopped at nearby St Peter's Street, Colin waves at a few relatives up for adoption ...... 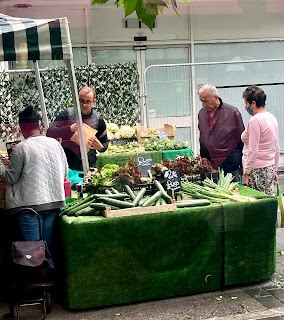 The bus stops out in the sticks, between two major roads, M1 and A414.  So not the quietest country lane, as we yomp a mile down into the village, the traffic noise dispersing surprisingly quickly.  Nice to give Dad the full flavour of intense BRAPA ticking as we skid on wet leaves, and cars pass us on pavementless narrow roads, the rain steady and certain.

Just after noon opening, like clockwork, we arrive.  Fullerlicious! 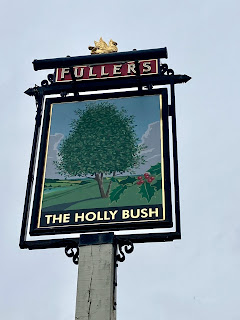 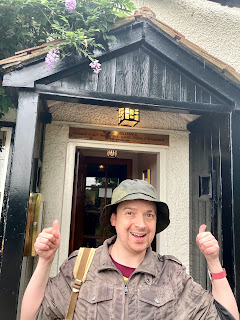 Wisteria on the outside, hysteria on the in, I'm a big fan of Holly Bush, Potters Crouch (1915 / 3344) with its serene, farmhousey 17th century atmosphere.  Bit too early for ESB (even for me, it pains me to admit it), I hit the Pride and it is drinking well, the head so bubbly it is almost (but not) reminiscent of a Strongarm in Hartlepool.  After commenting on the barmaid's tomatoes, she has no idea why they've been left out either, we manage to do exactly what we did in the last pub, going from being on friendly terms with the staff, to them hating us.  This time cos I want to sit in literally the only reserved seat in the house.  "We're only gonna be half an hour!" whines Dad, but no, these invisible diners are imminent.  The staff are so blunt and sarcastic, it is fabulous, when combined with the dilly-dallying posh elderly diner brigade who frequent this pub.  "Just wondering if you're open or not?" bleats a pathetic old man.  "WELL, THE DOOR IS OPEN, AND I'M STOOD BEHIND THE BAR, SO I'LL LEAVE THAT ONE UP TO YOU!" she replies.  The stuff BRAPA dreams are made of.  A different couple later on.  "Ooooh you can't beat a good cup of coffee" says wife.  "Yes you can" replies husband "It is called beer, dear!" Fabulous stuff.  THREE beetles in the urinal when I go first time.  Which one was missing, Ringo?  Well, I pee again before we leave and now there are four.  Textbook rural BRAPA ticking. 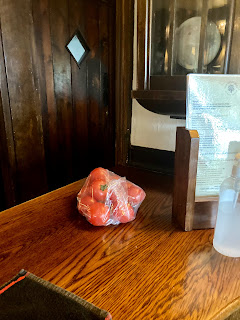 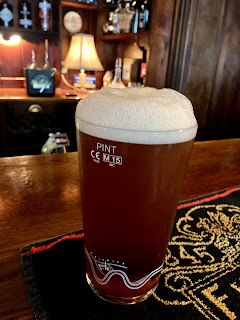 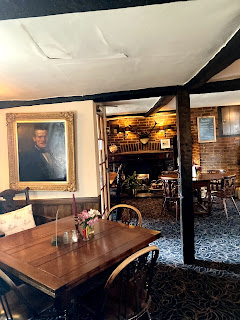 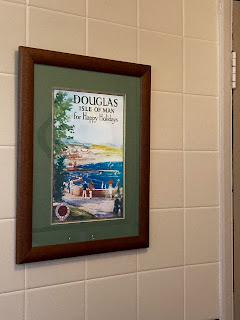 We'd given ourselves plenty of time to get the bus back, but what I hadn't realised is that flippin' Google Maps had been showing me 'expected' time of arrival, and since I'd checked, the bus had caught up the delayed 5 minutes!  Now, we had to proper stride it out, almost jogging.  Good job Daddy BRAPA is the fittest 74 year old on the block.

I kept refreshing my phone, as we managed to eat into the deficit, gaining 1, 2, 3 minutes, suddenly the corner was in sight, bus due in two.  Run across the road.  Bus a couple mins late anyway.  Puffing and panting, we'd made it!

My plan now was to see if any of the St Albans ticks were 'west' of town, but the Good Beer Guide App (never reliable) only had ONE pub listed, the Great Northern.  It's been a terribly unintuitive App since they changed it to the current version a few years back, and I've heard plenty of stories about missing pubs, usually in the Yorkshire Dales, but for 8 of the 9 pubs to be missing in the home of CAMRA, that's just plain silly.

Google Maps to the rescue again as I type in real ale pubs,  but we were already back in town by the time I identify the ones we need.  A short walk around the corner as I've spotted one quite close.  "Are we looking for a White Bear?" says Dad, squinting into the drizzle.  "Errrr no, a mermaid!" I reply.

"Oh yes, I suppose she could be a mermaid if she's wearing white" muses Dad. 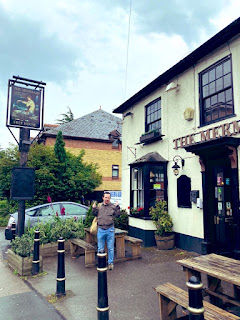 Mermaid, St Albans (1916 / 3345) was perhaps my pub of the day, everything about it just seemed exemplary and high quality.  A classic side street boozer in every sense of the word, we are greeted by a third consecutive friendly barmaid.  Do I risk upsetting a third barmaid in a row by asking why she is still in her pyjamas?  Best not.  Oakham Citra has been a favourite of mine in the past, the quality of it here exceeds even my expectations, pint of the day.  I misinterpret the dog biscuits jar signage as being a request to tip your unwanted crisps and scratchings into said jar, a sort of doggy treats benevolent fund.  But she puts me right, what it actually means is BUY actual dog biscuits for your dog, so you can enjoy ALL your crisps and scratchings for yourself.  Most confusing BRAPA signage since Derby's Old Bell Hotel suggested the toilets were refurbishing themselves, and would let everyone know when they ready to be used again!  We squeeze into a tiny window seat for two (probably designed for lovers so a bit weird) York Races is on showing suited 8 year olds, the next generation of pissed twats, making us glad we've left our fair city.  Dad is peckish, all this dog biscuit talk, so we retire to the nice astroturfed garden to eat my posh 'runny centred' Scotch Eggs I've bought us.  Running joke (runny yolk?) with Dad is I give him dreadful BRAPA food offerings, well he was so impressed, he was still raving about it today!  I'd buy them again.  We return our glasses and say bye, mermaid barmaid shocked to hear we are on an epic crawl!  Another chance to tell her we can't all sit around in our PJ's all day?  No, I'll leave it! 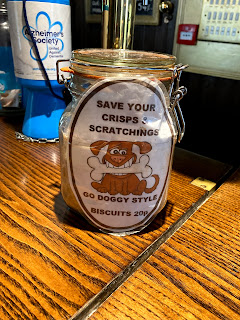 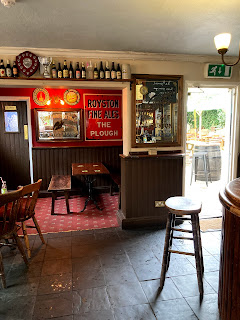 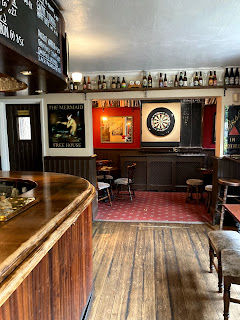 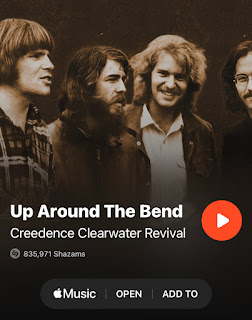 The day was about to start getting a tad hazy and crazy, so join me next time (probably after the Bank Holiday) for tales of our other three pubs.