Welcome back.  Having completed the 'old school' section of Lichfield's Good Beer Guide entries (George & Dragon and Horse & Jockey had both been excellent, not to mention the highly preemptive Cathedral that had 'future 'Spoons' written all over it), we were onto the 'business end' of the day with three more modern sounding entrants to finish.

I'm sure in the counties surrounding the West Midlands, they make the beer stronger.  A 5% Citra in G&D had tasted about 3.8%, and when I realised even Holden's Golden Glow is 4.4% , I might be slipping into the drunken abyss of the BRAPA mind faster than I could imagine!

It put me in mind of the time a toothless man from Wolverhampton prodded a dirty old toothbrush in my chest in the Great Western and forced me to down a pint of this loopy juice called Sarah Hughes' Ruby Mild, or the time a characterful West Bromwich man plonked me on a barstool in the Wheatsheaf and force fed me pint after pint of Holden's Black Country Stout without allowing me a word in edge ways as he talked about Arsenal and women with nice bottoms.  I might be exaggerating.

Like he could see into the future, Father BRAPA sat this next one out, taking the below photo and then sensibly buzzing off to find somewhere selling coffee. 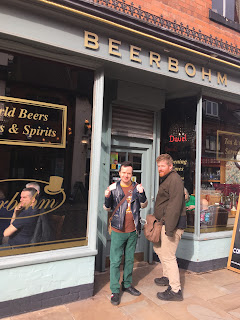 I think Beerbohm, Lichfield (1750 / 2967) surprised both myself and Tom, in a good way.  It was by no means your archetypal micro, more like a stylish cafe bar beer house hybrid, warm, bright and with a wholly pleasant atmosphere.  It is sometimes in the detail, and the patterned rug (like a classy Wetherspoons carpet) under our feet just added that bit of texture, grip and 'shag' to fool your feet into thinking they were back in a George & Dragon style environment!  A bit of a stretch I admit, but as we happily discussed my post-redundancy plans in the glare of the afternoon sun, I felt like Dad could have very much enjoyed this too, and no doubt got an excellent coffee.  It wasn't lah-di-dah by any means either, our fellow customers were a down to earth friendly bunch, the table next to us excitedly whispering "we're meeting in a lay-by in Solihull later to exchange one trailer for another".  Sadly though, my experience was sullied by the ale I was struggling with.  Cloudy, flat looking, weird acidic sour taste, I assumed it was off and 'finally' went to take it back, confident it had 'gone'.  But she tells me it is 'supposed to be like this', and whilst in most cases I'd be skeptical, she obviously was telling the truth the way she implored on me the fresh barrel, hazy look, and fruity flavour!  Well, I still thought she might offer to exchange it if it wasn't to my taste, but with locals on each side saying "you should've tried before you buyed matey", I went back to our table with tail between my legs feeling a bit embarrassed, and with a beer I disliked!  Her comments helped though, I came to realise it wasn't off, just a very 'unique' taste (I wish I could remember what it was!) which made it more manageable, but on leaving, I took my glass back and thanked her for explaining the beer situation, but told her I still found it disgusting!  It was all very amicable though, even when a bloke listening in added "you should've tried before you buyed matey" but this is the FIRST time in over 2,967 GBG pubs visited I've tried to return and beer I thought was off, only to be proved wrong!


Well, we found Dad lurking in the streets after Tom got distracted by a bakery - it kind of reminded me of Lincoln a bit where that creaky tudor pub is, but slightly more gentle.

During Dad's walk around, he'd noticed our next pub was next door to Beerbohm, which was just as well cos Google Maps was trying to send me down a cobbled side street. 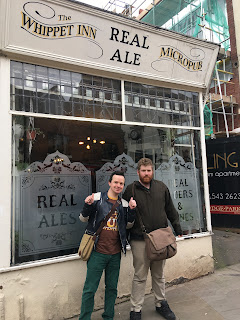 Well, the Whippet Inn (1751 / 2968) was the archetypal Micropub I'm always half expecting.  Where Tom had been delighted to have absolutely no problems getting blackcurrant cordial in the Beerbohm, which you imagine probably stocks pretty much every soft drink under the sun, no such luck here.  He had to get a posh ginger beer which looked like an incredibly dank craft murk effort, and with his beard and laboured swagger, I felt that for the first time in my pubbing history with Tom, his presence gave me an extra clout (if only he'd let me sculpt his hair into a topknot).  Of course, I wasn't taking beer for granted anymore, and when I heard a Guy Fawkes lookalike sternly asking for a 'Far Away Cows' at the bar with a tot of gunpowder, I thought 'funny name', realised the Father Ted reference, ordered it myself, and by gum, what a glorious rich stout it was.  Gorgeous.  Probably about 8% but as I mentioned above, you can't control beer strength in this part of the world.  And what with Dad hitting the Dark Fruits (a posh version?), we were a right bunch!  Atmosphere and comfort wise, wasn't a huge fan  Just far too limited, a small box of a room and being by the door, the whole experience kind of felt 'Al Fresco' so glad the weather has picked up over the past week.  "If she hadn't been with her mother, I'd have gone to Milton Keynes via Stockport".  Who said that?  I tried to tell Tom and Dad the latest Hull City embarrassment but they wouldn't let me spoil the moment, so all that remained was to pose with a friendly dog in the window, knowing we just had the one pub to go!


The closest pub to Lichfield City station on our list, so the logical place to end, I wasn't perhaps on top form by now ....... 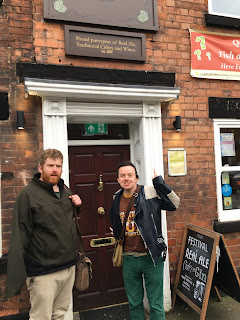 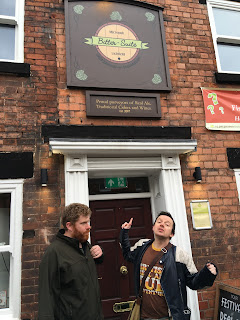 The fact that I forgot to take any indoors photos at Bitter Suite, Lichfield (1752 / 2969) can perhaps be explained by the last photos of the day, above.  But despite hazy memories, I remember being a fan of this pub, it had plenty of depth, bar to the right opening into a larger left side where we sat.  Loos back in the right bit towards the bar.  Friendly customers.  Errrrrm, that's about it!  Maybe Dad or Tom can add something in the comments below!  Oh dear, like Burton's Devonshire Arms all over again, at least I didn't pour half my ale down the urinal in here and laugh to myself (don't worry, it wasn't Bass).  Let's read the GBG description for clues ...... "was a pub 30 years ago" (well, that makes sense),  "service is to your table" (wow, I don't remember that!) ...... "choices from the chalkboard" (ah yes, that rings a bell, how very Bournemouth / Duffield), think it reminded me a tiny bit of that pub with all the washing machines in Hereford?  Well, it was lovely anyway.   And that was Lichfield, a really top pub town.

I was feeling very drunk for the first leg of the journey home, but a sleep and a coffee and Tom's jiggery-pokery befuddling the ticket inspectors with talk of a 'condition 14 split' helped sober me up, I had a nice chat with Dad, listened to some music, at one point got told off for singing too loudly, we bemoaned Hull City's impending relegation with a kind Wolves fan (I was called selfish for saying League One would be good for BRAPA!) and all in all, a top day.

See you all in a couple of weeks, I'm off to Lanzarote!  I'll do a tweet if I find pubs or ale.