My seventh year of BRAPA and finally, a debut for Lichfield.  One of those rewarding pub towns with five Good Beer Guide entries, good train links, not to mention a cathedral and a bit of water thrown in to the centre to give non-pubber visitors a reason to come for an explore.

Staffordshire seems to be a great pub county despite my limited experiences so far, and what Burton, Codsall, Stoke, Burslem and Newcastle-under-Lyme all have in common is I've got drunker than expected in all of them.  Could I make it six out of six today?  Father BRAPA was here, Tom Irvin would join us shortly.


The fun began, as fun so often does, under the West Midlands bracket with a train out of suffocating hellhole, New Street station, heading north where a Wetherspoons was strategically placed 'twixt Four Oaks and Butler Road stations for that pre-11am Saturday pint to get the weekend off to a good start. 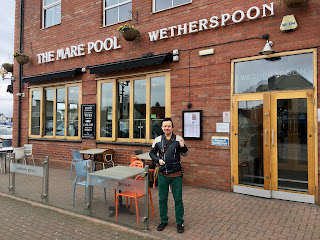 Mare Pool, Mere Green (1747 / 2964) so named because outer Sutton Coldfield used to have so many pools of water (insert inadvisable public urination joke here).  Quite a bright, airy and probably modern Wetherspoons with those huge bay windows, and a strange sort of fire pit towards the far left which I didn't really understand.  The snaking queues for the coffee machine were a timely reminder what a great invention they've been, when you just want a pint but all the breakfasteers in years gone by (I'm thinking Coventry, 2005) clogged up every sinew of space.  For as we know, you'll struggle to see more than one staff member behind the bar in a morning Wetherspoons scenario, however busy.  Even when I did get served, the Scarlet Macaw became a dead parrot very quickly.  Thankfully, and amazingly, the replacement Platinum Blonde by Byatt's (wherever they are based) was the best ale I had all day.  Father BRAPA found a rare quiet spot, even though it was between coffee machine and entrance, whilst Coronavirus signs in the Gents implored us to wash our hands, which I'm sure will be quite a novelty to some 'Spoons customers and the great unwashed of the outer Midlands.  Conversation was varied, but Duncan Mackay cropped up, and noting that everyone has only good things to say about him, I says to Dad "I hope people say nice things about me."  "They will .... when you're gone" he replied.  Savage.


Well, the pub was pretty much equidistant between Four Oaks and Butler Road stations, so we tried to carry on up the same road to Butler Rd, but somehow started going in a circle, and ended up at Four Oaks but managing to miss the train we aimed for. 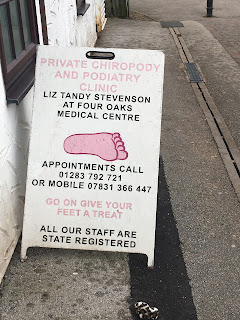 The fact that the toilets on both the train and in Lichfield City station were out of order didn't help, I bet it wouldn't happen in Prague, Vienna and Budapest, such a third world country this is, is it any wonder perfectly lovely law abiding people occasionally have to exercise their basic human rights and find a quiet place to have a pee? 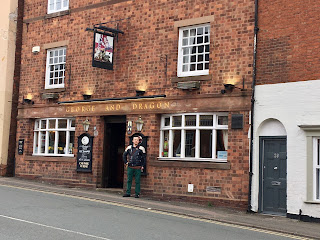 Aesthetically speaking, George & Dragon, Lichfield (1748 / 2965) was the most pleasing pub to me and felt very West Midlands, with the choice of left or right doors.  BRAPA always goes left in this situation, and a perfect lounge room with pretty bar area was waiting for us.  Ordering a 5% Backyard Citra this early was probably the beginning of the end for me sobriety wise, already!  As I walked down the corridor to the loo to get the much anticipated wee I so deserved(!) Dad told the landlady what a cracking pub this was, but she just 'hmmmph'd' , no doubt having seen so many gawping appreciative one-time-only visitors over the years, that our platitudes mean jack!   Still, every time she peered out of her hatch down the corridor, I made sure I said 'hello!' really enthusiastically, gotta maintain your own standards.  All the while, we'd suspected Tom was in the right side bar chewing the ear off a local, I could hear his voice and even see a pint of blackcurrant on the bar.  But then he disappeared into the pub garden, and 'Real Tom' arrived ..... had it been Ghost Tom all along?    Speaking of which, the garden was gorgeous and with the weather finally spring like, it was the perfect place to decide it was now or never if we were going to visit the cathedral. 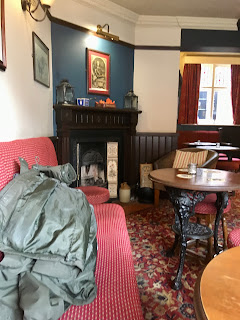 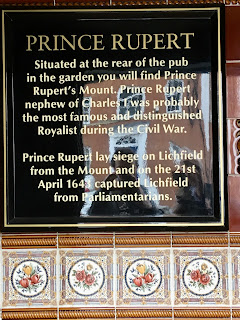 I love a good Cathedral / Church visit in a similar way I enjoy visiting pubs, and if there's a book with all of them listed that you can highlight in green, it might be what I do IF I ever finish ticking the goddamn GBG.   Sorry, no blasphemy here.

Lichfield's one, a bit black and gothic looking (sootier than sooty?), was one of the nicest I've seen ....

But the extra special reason for the visit was that Dad collects Rummer glasses, and a nice bloke on Twitter called Martin (no not that one, or the owl ..... by the way, the new BRAPA mascot is being shipped in from China as we speak and will be with me in the coming weeks) told me there was a two pint rummer which the vicar used to measure so the choir didn't drink more than two pints ..... poor buggers!

Well, we asked a volunteer who seemed a bit disapproving that we were on a pub crawl but was more than happy to tell us the location of the glass ......

Our next nearest pub involved walking through B&M for a shortcut, as if we needed our new found holiness cleansing! 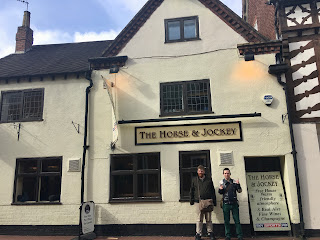 Pub of the day in terms of atmosphere, Horse & Jockey, Lichfield (1749 / 2966) was lit like a Christmas tree, whether it was the blokes hovering over the bar half watching the Liverpool game, the lunchtime crowd, or just the elderly curmudgeons dotted about the benches like the fungal infection you can ignore until it starts to itch on a nighttime.   It was exactly why pub ticking in Staffs, West Mids and Warwicks is so often a rewarding experience.  It had been modernised to some extent, slivers of hopbines and shiny prosecco blackboards in evidence, but had fallen short of selling out, managing to retain a true pub aura.  Stick the atmosphere here with the gentler aesthetics at the George and Dragon, and you've got the perfect Lichfield pub.  We'll call it Horse & Dragon, or George & Jockey.  With Jack Rolfe at a posing table trying to recreate those boatyard glory days of Howards' Way, Dad was on his soapbox about some topic we can't remember.  He had mine and Tom's full attention, but was soon interrupted by a loud thudding noise.  We looked over and an old dude was pummelling his bag of pork scratchings with his fist into the table.  Presumably, he was aiming for a salty piggy powder which he could then pour straight down his gullet without need for chewing.  False teeth are a bitch if you've got a scratchings craving.  Absolutely highlight of the day.  Crackling pub this one!

There were still three pubs to go, and I was feeling a little bit 'fresh' already.  Join me tomorrow night and I'll try my best to remember what happened in those remaining pubs, but safe to say, I was enjoying Lichfield very much.