BRAPA is ...... DRINKING IN MODERATION (Treading Carefully in Reading)

Greetings and here is a rare treat for you all, a BRAPA blog released pre-watershed!  Remember, this is going out live so don't say fuck or bugger......

Father BRAPA had gone rogue on this one, and booked Hull City match tickets for a day where Tom and I were fully expecting to be doing what we call an N.F.F.D. (Non Football Football Day) where we visit six GBG pubs, often in the general area Hull City are playing, but without that horrid bit between 3-5pm to spoil it!

Not that I was complaining too much, I was intrigued to see how bad my team looked after officially 'the worst transfer window in football history' ™

Having completed Berkshire back in 2017 (I'm generally 'leaving it alone' for now), I feel familiar with Reading thanks mainly to the efforts of the wonderful Sir Quinno.  Reading CAMRA seem to be one of the more imaginative branches, and are always looking to put 'new stuff' in the GBG to give us pub tickers reasons to return.  And even though fellow pub ticker Duncan Mackay was weaned on breastmilk from the teet of the Purple Turtle, it's not always so easy for us northerners to keep 'abreast' of all the new pubs that need doing.

I still had the weird Uni bar to do (not open weekends,obs) but aside from that, I still had three ticks to go at.  The perfect 'pre-match' number you might say, if you are having a pint in each.

Before that (and incoming Tom) though, it was time to do something I'd never done before and visit a pub in Slough!


Anticipation was high (said no one in Slough ever) as I rocked up at the local 'Spoons early doors. 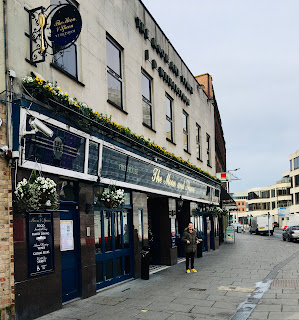 A man leaned on a wheelie bin groaning around the back of a shopping centre, the air was cold, the wind howled, everything seemed grey and metallic.  I was pleased.  This was the Slough I'd imagined.  John Betjeman wanted friendly bombs to drop on it, but it just needs a cuddle.  Moon & Spoon (1715 / 2932) was a reassuringly familiar Wetherspoons, swathes of patterned carpet and a big empty floor space leading to the bar, a few old men pinned to the walls by their own pessimism.  Some glared at my yellow trainers as though they offended their eyes.  Mancunians like them.  The service was brisk, approaching friendly, with a light southwesterly.  The Sambrook ale did a job, more than that actually, it was good enough to be joint second best ale of the day.  Dad and I had found a nicely partitioned booth, but a clamour of noise changed the atmosphere and a truckload of travelling Cardiff City fans had swarmed into the bar area.  Well, what a motley crew!   They all looked like either Craig or David Bellamy.  But not Craig David. and I was almost unsurprised when Dad returned from the loo to tell me one of them was stood in the middle of the bogs (not at a urinal) with his trousers down, staring into space!    Time to get out of here, but as a Slough debut experience, decent.  But it does make me wonder what else Slough has to offer pub-wise, surely at least a boring micro?!

On with the main event then, and no time for Maidenhead (sob!) as we had to get into Reading to meet Tom at the first tick, sort of North behind the station, almost Caverhsammie but not, at a pub called the Moderation - and you could argue, Tom is always best in Moderation .....

When I Google Mapped it (because the online GBG App nowadays is horse shit, bring back the old one with the orange background, please!) I was interested to learn the only other Moderation was in Hull!  I wonder if it is any good, or at least, better than this one? 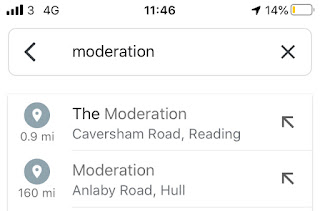 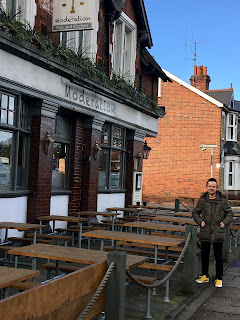 The font on a pub sign (as Matthew Lawrenson has taught me) is often a giveaway to what lies within, and perhaps that should've been the first warning sign at the Moderation, Reading (1716 / 2933) where we were surprised to find a particularly busy, bustling 12 noon atmosphere.  It is a fact that the closer to the home counties you go, the harder it is to differentiate the 'Rugby Union Jolly Boys Outing' from 'CAMRA TWAMRA knees-up'.  The polo shirts are the issue, but whilst I initially thought rugby, Dad observed some geeky beer behaviour and I could spy 'Whittle...' on the back of a lady's shirt which made me think Whittlesey CAMRA visit, unless they were part of a Justin Whittle appreciation society which would've been more wholesome.  North Cambs ale folk have been following me around this year, Peterboroughians chatting loudly in Hartlepool's Rat Race a few months back.  I squashed in at the bar and some Thai ladies (this pub does Thai food and is an 'East Meets West Fusion' I read, Vine in Norwich?) served me an 'Angels with Dirty Faces' (classic punk track) but it went off and before I could utter 'what a Sham!' they'd still squeezed one out, which was pure 'cleaning lines fluid'.  So I swapped 'em out for Tim Taylor Landlord (Doom Bar was the other option) and Dad and I marvelled at how they could make a pint of TTL taste so much like a Carling!  Dreadful.  We'd snuck into a backroom to escape the crowds but whilst going for a wee 10 mins later, the place had totally emptied out!  All the while, 'where was Tom?' was the question on our lips.  He said he'd meet us here.  I assumed he'd overstretched himself with some train manoeuvre and I was expecting a legendary obscure text message like "Foul up at Cleobury Mortimer on a standard bog cart 12 down with points failure at the crossover left me out of apex twin due in Sandhurst a week today".  Turned out he was in the front room (which we didn't know existed!) the entire time!  He'd heard one of the barmaids telling a Whittlesey person to 'shut up'.  Wonder if they'd criticised the pub?  Oh well, time to go.


We stuck to the west side of Reading, along a bit of a frightening main road where we turned off for pub two where a normal person would go to the Nag's Head and stay there til kick off.  But this looked a corker from the outside, Dad noted, and hopes were high as we made our way in .......


It was a real case of 'a pub of two halves' at the Butler, Reading (1717 / 2934) or at least, 'a pub which seemed to deteriorate the longer you stayed in it!' which isn't quite so good.  The initial euphoria probably centred around the fact that this wasn't the Moderation, and it did have something resembling a pub atmosphere, flimsy and fleeting as it was.  Just the one customer when we arrived, and I felt the barman could've made much more of an effort with us (or at least cracked a smile!) considering how dead it was.  A world away from Great Harwood.  My pint of Moondance from 'Triple fff' (isn't that fffffffff?) well, it started well but I was a bit bored of it by the end.  Outdoor bogs and some fabulously gaudy sofas were a nice touch, and you could tell it was a music pub as there was even this cartoon 'Butler' who kept appearing, trying to be cool in his shades and stuff.  I hated him, Butler's should Buttle and maintain a respectful distance from gaiety and glee.   All in all, a pub with bits to commend it, but ultimately falling a bit short of the required standard.


Meandering our way back into town, not far from the bus station, it was time for our saviour to errrrm, 'save us'.   Here it is ...... 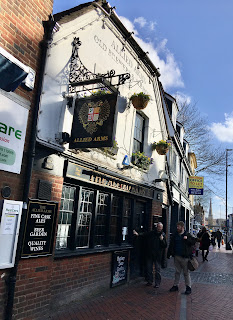 Yes, just like last season when The Retreat reminded us how good Reading pubs can be after a pretty demoralising experience in a pub called the Fisherman's Cottage, Allied Arms (1717 / 2934) meant we could go out on a Reading high.  Small and perfectly formed with low beamed ceilings and an army of jolly ruddy faced men and patient eye-rolling women jostling for position at the bar, it had a cracking atmosphere, you could just sense that 1828 history.  I'd been craving a dark beer after some pretty average stuff, so was delighted to see that Bingham's Stout on and by gum, it puts hairs on your chest, especially when you have to try and down it.  Struggling to get a seat, a bloke at a table saw us and moved to sit at the bar so we could have his table.  What a gent.  You'd not have got this behaviour in our previous pubs.  Dad meanwhile said the young barman was so 'switched on' it was almost scary!  Tom had a weird glint in his eye I recognised.  He wasn't planning on coming to the match, and I could see he was hoping Dad and I would settle into the Allied experience so much, we'd forgo our match tickets, leave it too late for the F1 Bus to the Madjeski, and carry on with the original NFFD plan.  I'd normally be tempted, especially as I STILL haven't seen THAT Terersa May mural in the Maidenhead Con Club, but I was today determined to take a look at the post-Bowen & Grosicki Hull City so after much sharing out my stout with Dad, then pouring some of it back into my glass, we strode off towards the bus.  Pub of the day.


As we hopped aboard the stadium bus, I glanced up at another good Reading pub I'd been to previously, the Greyfriar.  Little did I know Quinno was in here at the time, presumably giving them a special award for having the draughtiest pub door in the land #NeverForget

The match was nice cos we played really well, got a deserved late equaliser, and drew 1-1.

A post-match pub certainly looked on, but by the time the bus had dropped us back off at the station, time was ticking on towards our 19:30 train home.  Maidenhead seemed too outlandish, then Ealing did, then even Central London ticks in Aldgate and Chancery Lane seemed overly ambitious.

In the end, we had to make do with the Parcel Yard, you never quite know how it is going to perform on the night, but today, despite Six Nations people blocking every orifice, the Ossett Silver King and other one I tried were great, staff were funny and we quite enjoyed our corridor seat ..... 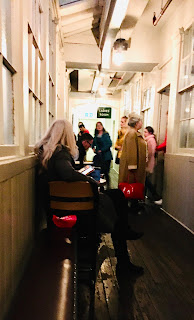 We found Tom in the front coach in an empty bay of four, so joined him for a pleasant journey back home, and here's a wholly 'accidental' shot of the contents of his bag in case anyone reading wants to know he's a very healthy chap. 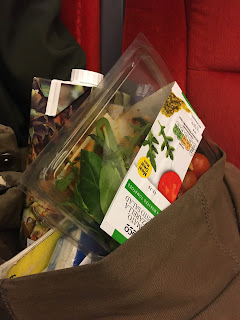 Top day out, and we'd get to do it all again in a couple of days, this time, in and around Blackburn.