A week ago today, 'twas colder than keg, bitterer than bitter, as the wonderful Father BRAPA drove us around a few pubs in the Blackburn area before our football team, Hull City, played there.

We'd done three pubs with varying levels of success, but with time ticking on, rush hour looming large, and roadworks meaning chaos on the M6, it made a lot of sense to continue our journey away from said motorway, from Haighton to the isolated but in no means tiny town of Longridge.

Sadly, our SatNav's love affair with the M6 wasn't over yet, and it turned what was probably a three mile drive into a nine mile one, trying to turn us back onto the motorway at all costs, grrr.

Longridge had two pub ticks in the 2020 Good Beer Guide, but only one was open today, so I will need a return visit if they let me back in.  For now, we were happy just to get into one and navigate our next move back towards Blackburn ......


I don't have a great deal to say* about Tap & Vent, Longridge (1722 / 2939).  I'd been to the Kirkham Tap & Vent (near Blackpool) when it was merely a 'preemptive', and presuming they are part of the same chain, they were very different.  I enjoyed the Kirkham version's modern kitcheny feel much more than this more traditionally micropub feel.  That surprised me.  Always nice to surprise yourself occasionally.  The small gaggle of young men gathered around the bar seemed to almost close ranks on our arrival, and I'd later be told by a Lancs man "People in Longridge are ..... errm, can be, a bit strange!"   Nearly all the ales had handwritten bits of paper acting as pumpclips rather than actual ones, and I can't decide whether that is delightfully DIY or a bit sub-standard?  Does it depend if breweries send you one?  Shouldn't they?  I really don't know how it all works.  Anyway, the ale was good, we sat at a rickety high metallic table of zero comfort, Dad made friends with some reindeer still up from Christmas, and if any good came of this, it crystallised in mind how much I'd enjoyed the other micropub style places we'd visited today.


Father BRAPA now broke the news I'd been fearing .... "I think we've only got time for one more before kick off".  My SIX for the day plans in tatters but not to worry too much, five is fine.

I'd always envisaged us approaching Blackburn from the south, so we could park down there because Ewok Park is south of the town.   Darwen had been my originally plan, but it looked a long way off from here.  Next closest then, and worry about getting to the ground afterwards.  And that place was called Great Harwood.

I had a sleep for the most part of our drive (such a princess!) but I distinctly remember saying to Dad at one point "one thing that has been missing from today which I'd expect from Lancs is a friendly, chatty pub".  'Twas like they read my mind .......

1B Tap, Great Harwood (1723 / 2940) and as we enter, before Dad even has time to wipe the condensation from his specs, this superb friendly lady behind the bar is saying "HOW ARE WE TODAY THEN GENTS?" and that set the scene for a very memorable pub experience.  Two customers flanked us, to the left a gorgeous gentle hi-vis guy who reminded me a bit of West Berkshire's finest, the equally gorgeous gentle but less hi-vis Tim Thomas.  And to the right, a lovely guy who supported Burnley so was desperate for us to win tonight. Apparently, the pub clientele is about a 50/50 Burnley Blackburn split, so I guess we were lucky tonight!  Of course, Dad and I soon launched into chat of BRAPA pub ticking escapades and when our Burnley friend mentioned a Reading/Partick Thistle guy, I suspected he meant Duncan Mackay, showed him the pic of us from the other week, and hey presto, he recognised him! (You have to imagine Partick Thistle and St Mirren are the same thing which they sort of are, but otherwise, spot on).   And just when I didn't think I could get any happier here, the owner Mike/Michael/Mike appears and what a smashing chap he was too.  The ale quality was absolutely spot on, so no surprise he was so proud of his cellar as to give us a tour ..... AND he loves old skool pumpclips and I even got one as a souvenir!  I even suggested he has a day where he puts loads of old skool ales on and uses these pump clips, so if you hipsters go in expecting to find your Tiny Rebel Cloudwater DIPA 7.1's and instead find Youngs, Directors, Fullers and Burton Inde Coope, then BRAPA is to blame!  Dad and I left with massive grins on our faces (and good directions for parking to walk to the ground), and the formula is quite simple, top ale and above all, a people's pub with a massive heart!  Cracking stuff.


We followed the parking instructions to the letter, and when we got under a bridge, we pulled into a pub car park with a name I can't quite remember, something like the Golden Anus, no time for even a half, but we realised we were only about 20 mins walk from the ground, so not too bad really.

But then I kept hearing this voice shouting us from behind, and finally a bloke caught us up and said we owed him £5 for parking in the pub carpark.  Well, he could've been anyone, and we could've easily parked on the street for free in hindsight, but we handed over the money anyway! 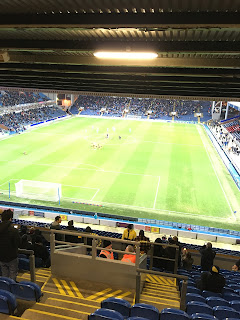 The match was more abominable than the worst type of snowman, first half was more like a Conference North game and that is being cruel on them!

We obviously got a kick up the golden anus at half time, cos we came out for the second half really well, and our player who is friends with Claire Balding in real life hit the bar, but then we forgot what we'd been told cos we have no bottle or leadership, and lost 3-0.  My feet were like blocks of ice!

A bit like the journey over, Dad left Blackburn via an alternative route and before I knew it, we were directly passing a village called Belthorn where I had a required pub tick!  Wow, I knew I was being cheeky, but if you don't ask you don't get, and with hours stating 5-11, Dad agreed to wait for me while I went in!

Sadly, as I strode towards the front door at the Dog Inn, I realised they'd closed early, due to a lack of custom probably. I don't actually blame them looking back, can they really be expected to hang around in the off chance of a pub ticker visiting 10:20pm on a cold Feb Tuesday night? 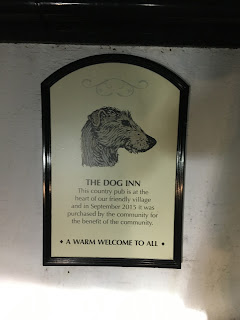 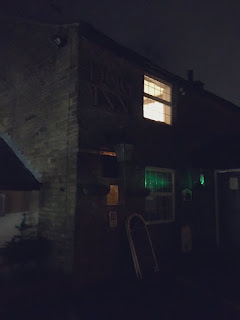 The upstairs was lit up though, and I stood there for a fleeting minute and imagined the landlady played by Julia McKenzie with her hair in rollers, adjusting the wireless, just as her husband, played by John Henshaw, walks in with a brew and a plateful of bourbon/custard creams. 'Their' song (by the Seekers or the Searchers) comes on, and they slow dance around the room together.

Then a gust of wind blew, brought me back to reality, and I remembered Dad was parked up around the side of the pub.  He did a good job of not looking too ecstatic when I informed him that the pub was closed and we could go home, to his immense credit!

So everyone, that is how you go to Blackburn on a freezing Tuesday night, lose 3-0, and still very much enjoy the experience.  Thanks for reading.  I'll be back tomorrow with more North Eastern tales as I'm staying in to recover from a horrible weekend bout of sickness and diarrhoea.

After these five pubs, I've now visited 64 Good Beer Guide pubs in Lancashire, which puts it above County Durham, Cumbria and South London, 6th in the BRAPA league table.

Not bad to say Lancs is never a county I've deliberately pursued, but just knocking off a few bits here and there on football trips and random days out is paying dividends.

It is a difficult but very rewarding county in that it is one of the few I've visited where the micropubs give the more traditional ones a run for their money, and I think the people are big reason behind that.

So much more to do still, I'd just LOVE to get to that one at Nether Kellett for example, but I think if I can knock off County Durham in the next few months, a few Lancs summertime Saturdays might just be achievable, so watch this space.