Saturday 20th October dawned full of sunshine, hope and pubby uncertainty, as one of the UK's nicest individuals (I mean Martin Taylor, not Noel Edmonds) picked me up from Huntingdon railway station to help me achieve some of Cambs rural western 'ticks'.

For added intrigue, he offered to throw in a bit of Northants.  I was never going to pass up that invitation, as Northants is a county where I had up to now only achieved one tick, a weird wooden place in Northampton selling beer made out of toads where the staff narked on the innocent Hull City fans to the pigs.


Our first port of call however, was in Cambs, at Leighton Bromswold (don't pretend you've heard of it), because I noticed it closes mid afternoon so didn't want to leave it too late.  Attention to detail you see.

The junction taking us off the A14 to the right and crossing it into LB was utterly terrifying, a wonder both of us weren't wiped out by oncoming boy racers.  Had that been the case, it'd have to be left to Duncan Mackay to revisit all 4,500 pubs (twice) in our honour.  And drink a pint and a half in each.

What a pretty little village, so sleepy, does anyone live here?  I panicked that the pub was shut but RM helpfully pushed the door open, looked at his watch,  gave me 27.5 mins, whilst he went off to look at local sheep, phone boxes and things.

I went in with zero expectations, or at least, that "we're in the middle of nowhere so bound to be a dining pub" attitude, which was entirely wrong cos I'm a judgey nob like that.  First customer of day, and the lovely old bloke behind the bar asks me what the heck brings me here, and before I know it, I'm getting a guided tour of this atmospheric low beamed pub full of old breweriana (if that is the word you people use?), pub history, they even brought out the pub village scrapbook a sad local had made, and took me round the back to meet fluffy hot mess of a cat, Amber.  And to add to the sense of immense well being, my pint of Woodforde's Wherry was pure nectar .... he hadn't charged me.  I clutched my fiver for a bit, but he was so into the guided tour, I wondered (hopefully) if it was 'on the house' so didn't say anything!  Now, I'd been aware of a background voice of Mrs GreenMan who he kept telling me was really 'the boss'.  She only appeared for my final five minutes here, as I feigned interest in the local football team (no, I was 'quite' interested) but it was long enough to say "did he charge you for that?" and when I crumbled and admitted not, she rolled her eyes like he's often forgetful like that!  But then I felt a bit dishonest, oops, oh well, and unexpected brilliant experience.


The 27.5 minutes was up, and Martin was strolling back down the lane to listen to me wax lyrical about that pub, though he'd had fun times himself with the sheep and what not.

Back on the now iconic A14, we crossed the border into Northamptonshire for the first of two ticks.  Martin wasn't sure whether to join me in this one, but in the end he did, as the impressive village green and probably closed bakery might not've been enough to hold his attention for 27.5 mins. 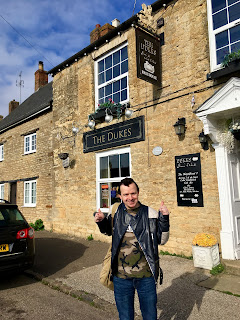 My initial thoughts were ones of horror, as I heard the sound of Twild life from around the corner, a dog flopped across the floor with a nonchalance that a cat lover could never appreciate, and bar blockers formed a tight guard in front of the hand pumps.   I gave Martin a quick glance of disgust, but as soon as I jemmied my way between the codgers, they were all welcomes and smiles, you know the old "ey up pal, sorry, get yerself in there and av a bladdy good gander!" though not a direct quote cos we weren't in South Yorkshire or East London.  The brunette barmaid had a pleasing countenance (this is 2018 so get used to my new brand of politically correctness) and had that half smile to suggest she knew the difficulties an outsider would face in a pub like this.  But it was cosy, the Oakham JHB was on good form, and the pub had a quirkiness which wasn't forced, but rather a sign that we were in a weird village, skeleton dressed as someone I've never heard of (see Martin's blog) and bogs given North Eastern names all made for a pleasing experience.  Martin left early in search of food, so I had 5 mins to 'observe' / drink up, and meet him back at the car. 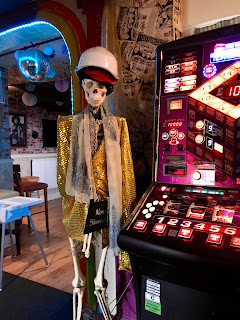 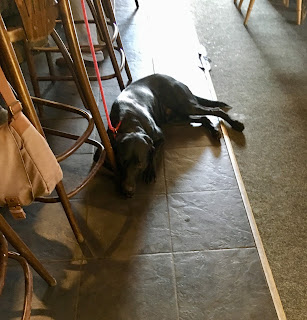 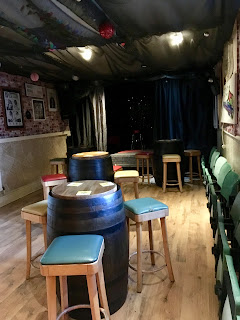 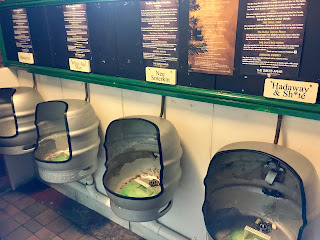 But the real reason for our venture across the border had been because Martin wanted to show me this next pub as he'd found it 'entertaining' on a previous recent visit.  It didn't open til 2pm (a sign of weirdness itself) and when we parked up across the way, it felt like we were going to a clinic / claim back some tax rather than going to a pub! 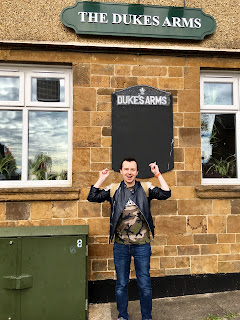 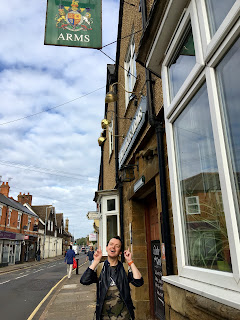 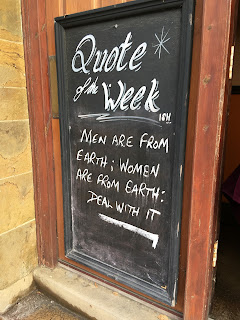 The GBG says it has been a keg only pub for years up until recently, and it might sound a silly thing to say, but looking back it really felt like it!  Proper basic boozer, smelt like the 1970's (I'd imagine), and Martin knew what was coming, an 8.5% ale on the bar called Abbot Confession.  "A pint of that!" he joked in his deadpan style, but the barman (a sort of Johnny Rotten trying to shock on live TV) decided he was going to be an objectionable so and so, and said "we don't serve it in pints .... you'd only waste it!" even though it was obviously a joke.  Worse was to follow when I complimented the pub cat behind the bar.  "What's he called?"  "SHE has no name.  She responds to a whistle, that's enough!"   I then wittered something about needing to give her a sense of identity, (no wonder she looked stuffed), but RM knew I was fighting a losing battle so took me round the corner to admire the obscure vinyl records in the pool room.  It was then that the barman reappeared and softened to us then, obviously glad we were admiring the pub.  We then briefly went into the 'garden', before completing a circle of the pub, the kinda tour that Mr Leighton Bromswold would've approved of.  A cracking and quite unique type of boozer, I'd recommend a visit before the cat gets a name.


So there we go, the midway point of the day and with zero expectations, three pubs I'd all rate at least above average.  And I hadn't even got to the most anticipated pubs of the day.  Wow.  What could possibly go wrong?

Join me later this week to find out!