Back in Cambridgeshire for an eighth time in my quest to visit all their current Good Beer Guide pubs, and a fifth time with help from one of the loveliest men in the UK (not Philip Schofield but Martin Taylor).

Today, the focus was on St Neots but I asked if we could tag on two fairly close by villages, Little Gransden and Great Staughton.  Not only that, but Martin himself then offered to add Comberton which meant I could get my full six quota.  What a gent.

If there is one set of football fans you don't want following you around, it is Donny Rovers fans.  Last time out, they were away to Peterborough so you can imagine what the train was like that day.  Today, they were away at Charlton so rather than stay on the LNER til London like normal human beings, they jumped out at Peterborough and got on the same stopper train as me.  Must be cheaper!

They did upset some young Prosecco ladies sat near me, one of whom sneezed then exclaimed "I think I'm allergic to the south!" before calling all Doncaster fans 'thick'.

So I was relieved to get off at St Neots where Martin had just pulled up in front of the (correct) car park (I always stand in the wrong place) and we sped off along at A428 (it is no A14 but you can't be greedy) to the village of Comberton.

We parked vaguely nearby and Martin did what he doesn't normally, and joined me for pub no.1: 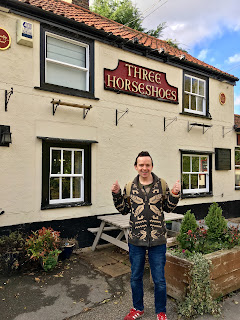 We've been in enough pubs together to know that we'd be thinking the same thing as we walked in here, disappointingly dining, no discernible drinking areas, not ones to get comfortable in at least.  But first impressions can be a bit deceiving and my ale from Warwick was superb, Martin 'enjoyed' something soft and responsible, and the situation improved further when the fabulous landlady, Caragh (pronounced Cara but her Irish twang meant the 'gh' ending was a pre-requisite) started chatting with us.  Now usually when you describe BRAPA, the response is "wow, never heard owt as weird as that before" but very occasionally, you get what we got here.  "Oh yeah, we've had about SIX people doing something similar in here over the past year".  Martin and myself blinked disbelievingly into the rural Cambs middle distance, but Caragh warmed to her subject, in particular telling us about this bloke from Brighton who pub ticks the GBG like us.  He's not a social media man, but it was the next bit that shocked us.  His wife acts as his P.A.  She books his travel, plans his trips, gives him his pub itinerary.   "I NEED A P.A." I screamed, and Martin looked thoughtfully like he was wondering how dead he'd be if he suggested such a thing to C.Taylor.  Other topics included this being Caragh and her husband's first pub venture, amazing job they've done, and also at one point she said they were 80% wet led, to which I'm sure Martin coughed "bullshit" under his breath.   Cracking pub though, but will be remembered mostly for Mr Brighton's P.A. wife. 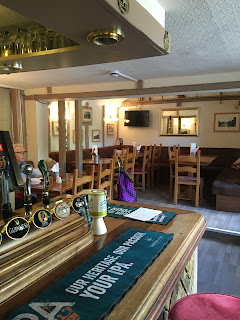 Back in the car, Martin remembered he may have heard of Mr Brighton before when he was ticking off a pub in Eltham, which might be in South London like so many places in the UK I've never heard of.

No time to fret too much though, as pub two was soon in sight, looking rather royal and remembrancey: 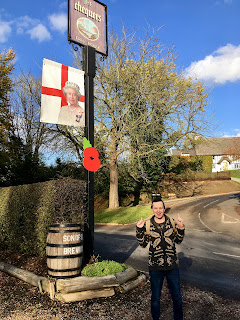 It was always going to happen, I'm just surprised it took this long, but I'd finally found what in my eyes was the perfect rural Cambridgeshire pub.  "This is what the Queen's Head in Newton should be like", said Martin almost as if he'd read my mind as we entered the narrow main bar with slate floors, wood smoke billowing from the scorching fire, a friendly old school landlady serving ales from their own 'Son of Sid' brewery.  Above us hung an old beam, rescued from the neighbouring cottage which burnt down many years ago, but there was a picture of it.  There was also a Victorian twild shoe, rescued from the chimney flue.  The pub had just been awarded a special certificate having appeared in every GBG since 1995 showing all of the front covers.  Whilst Martin went off to explore the pub, the landlady soon got chatting to me, and her reaction to 'pub ticking' was more the reassuring shock & amazement of someone who didn't think people like us existed!   There was humour too, as one of their ales was called 'Golden Shower'.  I had to have it.  Bad news, she'd forgotten what I asked for and when she returned, she had to ask "You did want a golden shower didn't you?"  "Pint!"  I clarified, which probably sounded worse.  Martin returned, we even got a slight behind the scenes tour as she slightly alluded to ghostly goings on, all the best pubs have a ghost, and don't call me Derek Acorah but I could feel the 'energy' of centuries old pub history which you only get in the truly historic untouched old places.  Wonderful. 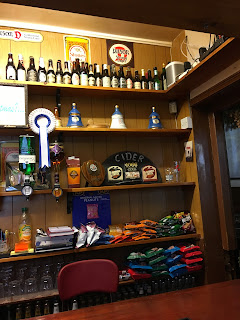 "Why is this pub never talked about in the same breath as the best in the country?" I whined to Martin as we hopped back in the car.  He didn't know, but less than a fortnight later, he sent me a link telling me it was up for CAMRA pub of the year.  And so it bloody should be!

Next up was Great Staughton, up and through St Neots towards Bedfordshire, and I was once on a rural bus near here in 2014 when I was trying to get to the Plough in Bolnhurst, but Tom was my only follower back then so I don't expect you to remember/care.

Needless to say,  I was dying for a wee when we arrived which you can kind of tell: 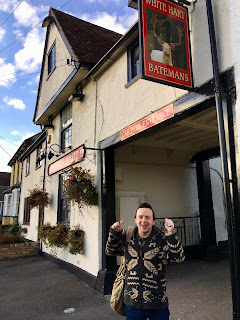 Another really good old boozery type of pub with many consecutive GBG entries, I really felt I was getting some great ticks in today.  The plan was I rush to the loo whilst Martin used all his #PubMan experience to do what any sane person would do in a Bateman's house and order the XXXB.  So why I hovered behind him was due solely to my own incompetence.  When I remembered about my loo predicament, the three urinals were actually recycling bins.  One for lager, the middle one for bitter, and the other for cider.  I'd not seen this before, very impressive!   Martin had picked up a 'filled roll' and a packet of Pipers to keep him going, as I smuggled my 'bag snacks', always a high point of any BRAPA day.  But our peace was short lived, firstly by a hungry pub twog, which ended up fighting a larger darker South African hound in one of the most thought provoking apartheid reenactments ever seen in West Cambs.  And then, we (especially Martin) realised we were in the way of two chilled out S.A. dudes trying to watch the Rugby Union - we'd actually walked into the pub and it was full of egg chasery twerps from the get-go.  They didn't seem to care the screen was blocked owing to "poor quality early exchanges from both teams" but RM didn't feel comfortable so I had to neck my XXXB (not an easy ask!) and we buggered off as soon the dogs went in for round two.  Good pub. 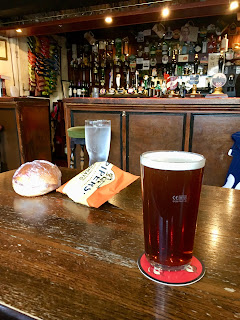 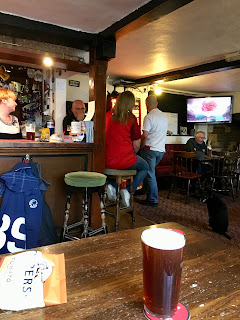 Martin had pubs in "the North" (wherever that is) to do, so he dropped me on the edge of St Neots to do my three pubs in the town.  How did it go?  Join me tomorrow to find out how easy it is to lose your memory when you've had a few pints.