BRAPA - It is Vintage Hull

My first trip to the city that god almost forgot to create since the new Good Beer Guide came out in September.  I had a sort of pub tick, a couple of pre-emptive ideas I'd gleaned from that Hedon micropub, and least importantly, a football match as the timid Tigers took on the Crazy Canaries.

I'll pay tribute to Father BRAPA here.  He picked me up from outside Yorkshire Bank in L**ds at 4pm, and in the torrential rain and heavy traffic, with visibility poor, we skidded our way to Hull.  And then I didn't even let him go in a pre-match pub he wanted, all in the name of BRAPA!

To be honest with you, under BRAPA rules, I could've already 'green penned' this entry, for I'd been twice before when it was known as King's Ale House.  I remember our first visit approx 2002 because Dad thought a malevolent force at about shoulder level was sapping all his energy, and all I could do was wonder where Yvette Fielding was when you needed her.    It was unrecognisable these days, all shiny American themed strange seated weirdness, not the kind of place to ordinarily get comfy in.  Dad had been in twice since the refurb and reported poor beer on both occasions so was surprised to see it make the GBG.  But it was to prove a happier experience for me.  The barman was fantastic from the start, friendly, approachable, stoic yet effortlessly charming, and he served us from a range of beers which seemed strangely horror-based (Hull loves being a month behind), and many from Camerons.  A nice bloke with an air of the 'pub ticker' smiled at me from the corner, looking up from his tablet.  He had an element of the Duncan Mackay and the look of a bloke who'd ticked 99% of the GBG.  If he'd been watching clips of 22 rare moths flitting around a non league football pitch in Reykjavik, I'd not have been surprised.  We sat on these peculiar chairs, half stools, half seats, horrid contraptions, the music was too loud.  But as we debated where we could move on to, we decided time was against us and we'd better stay put and ring for a taxi to the KComm from here.  Plus there was this incredible 6% stout on, and soon I was enjoying that with a bowl of fries.   And you know, we almost started to enjoy it.  But as Head of Steam's go (and I still have Sheffield to do), it didn't have the charm of my fave in Huddersfield, and was less good than Newcastle, Durham and even L**ds which isn't amazing.  Yet, when all said and done, a decent pre-match effort. 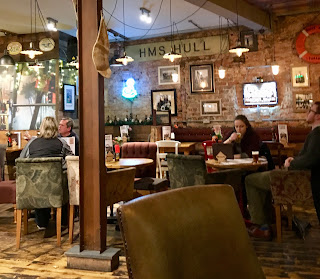 I have to admit though, in the cold light of day, if I'd approached this in normal BRAPA circumstances, i.e. a 27.5 minute one pint visit on my own on a Saturday lunchtime, I'm likely to have been even less complimentary!

The match wasn't too bad for a 0-0, there were approximately zero fans there, but an okay performance against the league leaders, you can't knock it can you?


Post match then and with no queues to get out but a "need to let the traffic clear" (best excuse ever), we decided to settle a few minutes in a new pub.  Was thinking the Corn Exchange, which has now been taken on by Atom brewery and is 'good in a modern way' perhaps, a good 'post-emptive' for it was in the 1974 GBG.

But we were soon on Silver Street, home of what we assumed was Hull's latest Micro offering, but surely it was closed and we'd walked past it?  No, it was all red and twinkling in the distance ...... 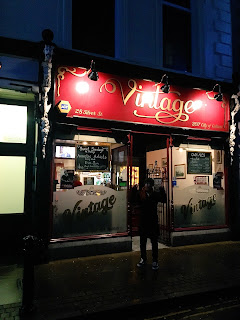 Dad started pronouncing the word vintage in a French accent which was weird, as we walked in, but he was immediately drowned out by a little circle of old folkie folkers playing folk music in the folkiest way you could imagine.  Great tin whistle and mandolin action, creating a lovely atmosphere underneath the old front covers of Playboy.  A first class barmaid served me this gorgeous toffee porter, and indicated to the huge covered trays of sandwiches - egg mayo or ham - help yourselves, she told us, and with the music lilting gently in the distance, I, for the first time ever, had been fully content in a modern Hull pub.  Well okay, Walters has had its moments of bliss, Chilli Devils is quite good, never been a Hop & Vine fan, Furleys pah,  Lion n Key and Wm Hawkes, hmmmmm, jury's out on them, but there was something special about this.  Can't call it a Micropub either, or if it is, I have the same brain power as Dean Windass.    Saddest thing, my phone went dead so I only got one photo!


So that was an unexpectedly great bonus, and it was off back to York.  I'll be back on the BRAPA trail Friday night, as I continue to plug away at West Yorkshire's remaining 12 ticks.  Oh, and in a boring stat to end on, it'll be the first time I've ever visited a new pub on 30th November, and not many calendar days you can say that of.  See you on Twitter after 4pm!