BRAPA - Too Little(borough), too late : A Tale of Spiders and Smirnoff Ice

Like a young tween cramming in some last minute revision before an important exam, Friday found me pushing that after-work envelope, in order to get my final 'pub tick' figure as high as possible before the 2019 Good Beer Guide arrives and I have to 'lock down' (official BRAPA term) my figure.

Having said that, tonight's jaunt to Littleborough on the cusp of West Yorks and North East Lancs (sometimes called GMR) had been at least six months in the making.

It all started when work colleague and rambler (in more ways than one) Karl Dawson told me he'd been sat outside a pub mid-walk having his sandwiches when a bunch of bare-footed female druids wearing hoods came along, did a ritual and spoilt his peaceful lunch break.  The pub in question was a GBG tick, so I promised to take him back for what I hoped would be more druid friendly BRAPA action.

It was a drizzly misty evening when we arrived in Littleborough, armed with snacks, a photocopied ordnance survey and probably a flask of weak lemon drink.  A 2.6 mile walk took us to over 1,300 ft.  Now, you'll be shocked to hear this, but I've had a bad knee I don't like to talk about.  It is getting stronger, this was its biggest test yet.  Karl doesn't do 'empathy', so I had to keep pace not always easy on slippy uphill rocks.

At one point, I sang 'Wuthering Heights' by Kate Bush (wrong location, and weird, even by Karl standards) and made a lame joke about how it'd be funny if Donald Trump had made a wrong turn and gone to this White House (the name of our pub) instead.  Even Karl didn't laugh.  Karl always laughs.  The altitude was getting to me.  Maybe those druids were actually the KKK, I wondered, but didn't have the energy to say it out loud.

And with the drizzly turning to heaving rain and the mist getting thicker, I saw a glimmer of a white pub-like building .......

And here we were, 6:20pm and Karl's special watch told us we'd done really well, considering the conditions and terrain.  Sweat and rainwater soaked my upper half.  Pub not due to open til 6:30pm, wait in the lobby?  But a quick push of the door changed all that, 6pm apparently. 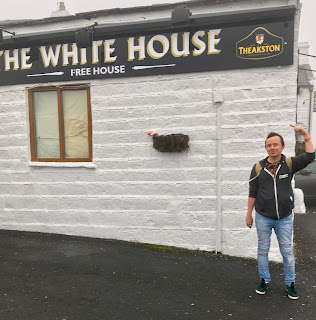 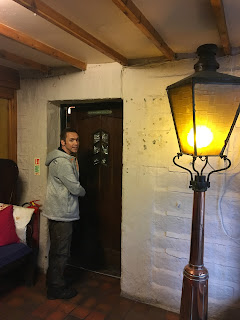 Now this was Karl's second BRAPA outing, having come to Hartshead Club with me when I finished West Yorkshire last November.  Alcohol-wise, he only drinks Smirnoff Ice.  No imitation will do.  It is J20 if not.  He thinks it is 1997 still.  I respect that.  We had no joy on that night in Hartshead, so imagine his surprise to see Smirnoff Ice in the fridge glistening in all its glory.  To add to our early sense of well being, my Brewsters Pale was absolutely first class.  One of, if not THE, pint of the year.  After some ropey stuff during the last two hot months, this was even more welcome.  The pub was larger than you'd expect, resembling something between a baronial hall and a large hotel dining room, it was comfortable but there was no mistaking the amount of oldsters ready to stick their wizened faces into a plate of stewed veg pie & mash.  Karl though didn't want to venture too far into the pub, so we sat on the edge between bar and dining room, which apart from me getting hit by duffers using the wrong entrance, was quite a good idea.  Sharing our table was a rather fat spider, it looked grade II listed heritage, bound in a 17th century cobweb.  Now I'd warned Karl pub observational skills were key (he spent the whole of Hartshead talking about building a bookcase out of wood) so was delighted when he suddenly exclaimed that one of the cutesie waitresses rushing past us with food had farted!  I hadn't heard it, but he was convinced.  And luckily, I was quick-witted enough to reply "I told you we'd get a trump in the White House!"  He laughed this time.  Redemption.   And that was that, it just better get in 2019 GBG or I'll cry.


The X58 bus doesn't run all that frequently, but it does run at 7:05pm, so we'd timed our departure deliberately well.  Just as well as the weather was horrendous by now, you could barely see a couple of metres in front of you, as the wind and rain lashed into our backs, and no discernible bus stop could be found.

So we waited, squinting into the gloom.  And waited a bit more.  And at about 7:20pm, the bus FINALLY arrived - no way I'd have walked back down.  The bus driver found the state of us amusing, even if we didn't!

Back in the town itself, our pub was easily identifiable.  Locals eyed me cautiously as I posed for photo with hood up like a pubby druid. 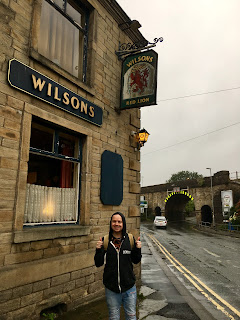 Wow, well this was quite the feast for the eyes this cosy multi-roomed gem, the kind of pub you imagine in your mind's eye when asked to describe the perfect pub (well, if you like old boozers that is, Karl preferred the less challenging nature of the White House).  I like edgy, friendly and quirky, and this had it all.  Even a Bass mirror, which I couldn't photograph cos a bald man kept getting his shiny head in the way of the shiny mirror. Little fairy lights and the plush carpetting made it almost feel like a grotto, yet it was full of jovial old folk, a few Santa types, all drinkers, not a menu in sight.  Yet a fair chunk of the amusement happened at the bar.  It didn't help my ears were popping from the bus journey down the hill and I was quite deaf.  The staff, in their attempts to be super quirky amusing friendly, came across a bit odd, but that added to the charm I guess.  My first mistake, trying to order the Trooper.  "It isn't a real handpump!" the barmaid confessed, I thought it was a bit stumpy but my eyes hadn't adjusted to the light either.  They DID have Smirnoff Ice, "but we'll have to pour it into a glass" they conceded.  Karl was not impressed, though he does look like the type who might bottle (but not glass) someone.  And when I said thanks and went to leave the bar, she says "I hope it's worth it!"  I'm still trying to work out what she meant by that.  Comment on cheapish prices perhaps?  My pint of some dark brown standard was again, excellent quality, though I didn't like my glass which had ridges to put your fingers in for grip.  A good idea in theory perhaps, but this is drinking not bloody American sports.  Was conscious someone kept calling 'Simon' behind me.  Surely no one here reads BRAPA, we aren't in an Ely micropub now.  Then it became clear the dog (the apple of everyone's eye in our room) was called 'Simon'.  Wow, a BRAPA first!  I mean, it happens to us all I guess.  We've all seen dogs called things like Fluffy Duncan, Sir Quinnine, Dogging Lager, Tandlehound and Curmudgepup.  But now I had my own pub dog moment.  One final moment of strangeness as I went to the loo, got talking to some old boy about the British Summer definitely being over, when he hesitated in the door way as I was washing my hands.  He'd seen his mate in the corridor, who was trying to usher a spider out of the back door!  I loved this pub. 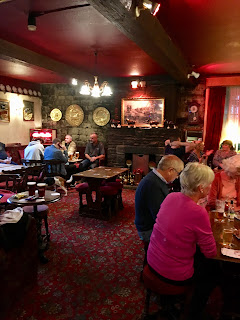 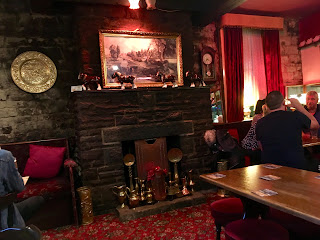 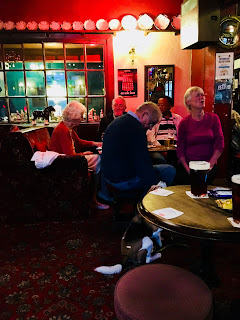 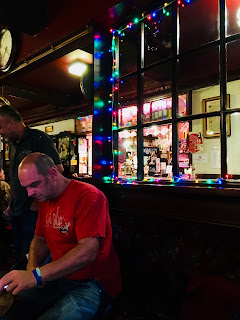 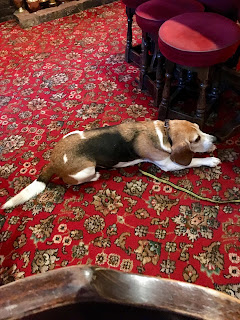 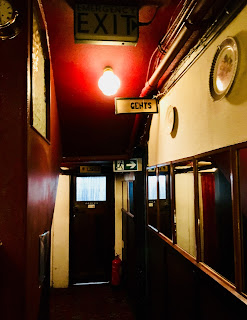 So a really good night, thanks to Karl, and I suppose a case of two spiders and two Smirnoff ices.  I have to tell you about Saturday's visit to North Derbyshire and South Manchester, but I'll do that on Wednesday.  We might get a cheeky Friday nighter this week too, out west.  And then Saturday sees a trip to Newcastle under Lyme, which is scarily near Stoke.

But all eyes really are on 'when will I get the new GBG'?  History tells me Fri-Sat this week might be when the folk (or at least Londoners as RM pointed out) might get first sight of the 2019 GBG.  I have ordered next season's home shirt, sharpened the stanley knife in readiness for 'brewery section extraction' and staked out Rymans in the hope of a new green highlighter and notepad!

Thrilling times ahead.  Keep on pubbing.  I believe in you!