It was my 18th consecutive year at the Rebellion Punk Festival in Blackpool, and that of course brought with it the added bonus of West Lancashire pub ticks.

Just like last year, I went across on the evening before the festival, and after checking in at that dubious Travelodge near the football ground, I took a tram up to Fleetwood where a new pub had appeared in the GBG over the last year.

A teenage boy lost his money by trying to impress some girls by jamming it in these gaps in the seats, and because me and the tram conductor joked about what a loser he was, I ended up forgetting to buy a ticket.  Was it going to be 'one of those nights?'  Is it ever not 'one of those nights' in BRAPA?

At the end of the line, at Fleetwood Ferry (pronounced 'Fleetwood Fairy' by the robot lady because you know Blackpool folk, all born with silver spoons in their mouths!) it was a short walk around the corner to the pub, which had to be taken in landscape cos it was quite a long one, wahey. 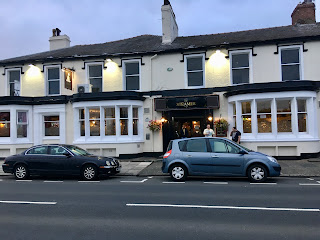 I'd read the GBG entry and was interested to hear Syd Little of Little & Large fame worked here (he actually owns it but the GBG makes it sound like he might just bring your food out!), so I was not massively surprised when I didn't get served by him.  Bit of a shame though as I had my joke 'can I go large for an extra quid?' which of course, he'd have loved and never heard before.  Also a shame as Martin Taylor used the same line with no joke intended on a recent pub-tick in Aberdare.  Anyway, I forgot about all this as I ordered my pint of some local muck that tasted like it was brewed in the amusement arcade opposite (LocAle) and heard a crazed man in combats with a long beard exclaim "MARVELLOUS, ABSOLUTELY MARVELLOUS" to a bunch of shoegazing tweens who were finishing a 'musical turn' and the lead singer seemed rather embarrassed as Mr Beardo heaped praise and hugs on him.  All seemed normal for about 2 minutes until I was aware that the lively couple on the same bench were edging closer to me so they could get a closer look at the large TV.  This normally only happens when a live sporting event was on, so I assumed they were turning over to some rugby dross or boring football friendly.  Yet, the monkey documentary remained, and before long, the chap next to me with a Welsh accent was comparing it to Love Island.  "Bit like Dani Dyer, she'd not shaved for 8 weeks!" he comments at one point, explaining he'd been 'forced' to watch it with his daughter who works in (or runs?) the pub kitchen.  We then compared primates to Wetherspoons regulars, his wife then commenting there's still 8% Neanderthal in most people, but possibly 11% in 'Spoons regulars, we decided!  I was loving these two, but felt I was STILL missing something unsaid.  Then, the monkeys finished, and a hush as 'The Real Marigold Hotel' started, Syd Little appeared in the middle of the room, told everyone in a mock-telling-off to hush and settle down, before disappearing again!   And then he appeared on screen, and it all made sense!  Even by BRAPA standards, this was an accidental stroke of magic, of ALL the times to arrive in here. 'They'll think I planned it', I told my new mates Mick and Jill, explaining BRAPA.  'If you hang on til the end, we'll give you a lift to your next pub as it's on our way home!' they kindly offered.   At one point, I forgot myself a bit and said a bit too loudly that the Krankies were the absolute stars (oops!) and I was whisked away in the Mick n Jill-mobile 10 minutes before it ended!  Possibly for my own safety(!)


After more nice chats, I was dropped off in nearby Thornton just across from Cleveleys, but not to be mixed up with Thornton Cleveleys which is between the two, phew!

It was pitch black by now but as I squinted up at the pub, I saw that unmistakable 'Sizzling' sign which always makes me think of Pub Curmudgeon.  Not because he's sizzling, even though he is, but because I met him in a pub of the same chain, the Cherry Tree, Culcheth.  I nodded to a ghostly Emlyn Hughes figure who was smoking outside, and nervously crept in. 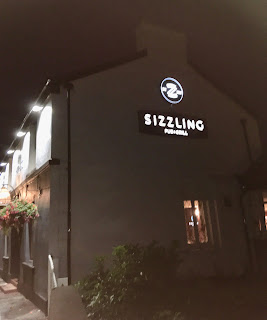 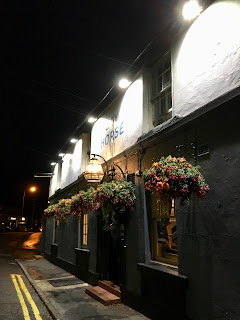 Most things were going to be anti-climactic after that previous pub experience, and this was pretty much what you'd expect if you crossed a Sizzling chain pub with an inland West Lancs locals pub after 10pm.  It was basic, no frills, and despite the working men leaning on the bar in hi-vis, flat caps and beer bellies, not an eyelid was batted as I wandered up to the bar and chose Summer Lightning over Tetleys (I'm young, sort of, so there!) and sat in a strategic position so I was near enough the bar blokes to hear or observe any weirdness but partitioned off enough so that I was keeping my distance.  Emlyn returned and sat at a high stool bearing down on me, so I now knew how Princess Anne felt in that episode of Question of Sport all those years ago.  And a couple of lads playing darts like they'd never held a dart in their lives, or were they just drunk, or aiming at me?  But otherwise, not much seemed to be going down and I spent most of the time reflecting on the Steamer in Fleetwood and how I'd not really had chance to appreciate what a bustling brilliant community pub it was, not that this wasn't, it just lacked a bit of spice (not the drug). 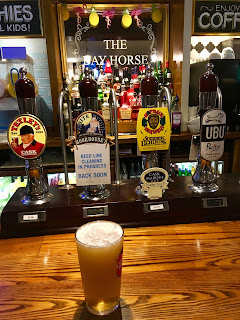 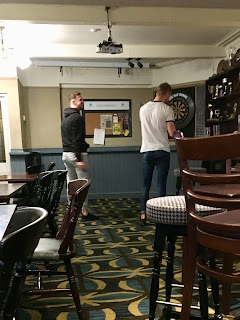 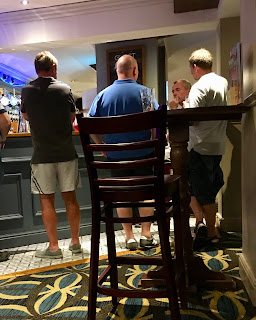 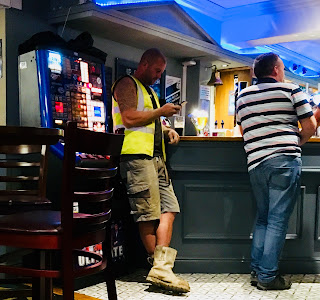 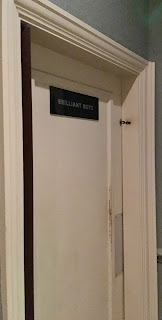 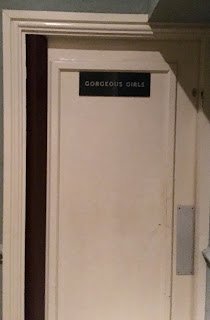 No time to linger (well there was because trams run til about 1am and my last 'pub' opens til 4am) but a 33 minute walk to Cleveleys tram stop was next.  I'd have done it a lot quicker, but I have this bad knee which I don't like to talk about.

I was about the only person on the tram this time, so definitely got a ticket this time, and 'alighted' at the North Pier which was a short walk from my one remaining Blackpool 'tick' which presumably hasn't been in the GBG before ..... and am tempted to say, won't again!  But who knows in this game?

With the streets all dug up with roadworks, it took me a while to locate the correct street, but when I turned the corner on to Queen Street, I saw a group of shouty aggressive blokes, a few amused looking bouncers, and a police van.  "Haha, this is why I haven't been in a nightclub in years!" I joked under my breath, til I looked up horrified and saw the sign 'Bar 19'.  This was my required pub!  Eeeek. 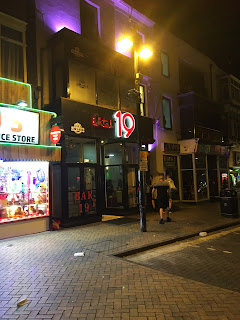 Everyone was dancing, whooping, dribbling and drinking strange looking cocktails as I walked in as confidently as I could manage.  Luckily, the three handpumps were all at the near end of the bar so I just edged up next to this old miserly looking bloke hogging them, who I had no idea why he was here, as I've never seen anyone look like they are enjoying a pub experience less!  Well, apart from maybe the barmaid who was probably in her fifties but looked at least eighty, sour faced, like someone who'd spent far too many years working in Blackpool establishments such as this.  I was the only one to pay by cash, and this seemed to involve her needing to find keys for the til, and getting served and my change took forever and she resented every second of it.  At least it all allowed me to bond with a jolly guy called Jack, who wanted serving after me and was non too impressed with the shambolic service.  His girlfriend laughed in the background.  I gave him a BRAPA card anyway to act as a consolation, pretty sure it didn't!  Not only this, my ale emitting the briefest spray of foamy ale and then spluttered to an untimely death, and I was told in a very matter of fact way that only the middle ale was on.  The old ale drinker glared like he blamed me as she turned both pumps round.  Jack asked if I'd join him and his gang for a drink, but over the 'banging tunes' I told him I hope he didn't mind if I sat at the bar, and he didn't.  Soon, the dancing ladies were all tying each others hair back with plastic straws like it was some new craze, and I was asked to assist one of the older ones, who seemed to be here with her 18 year old son.  Amazingly, I got it to stay in which is good cos I'm terrible at tying up balloons, not that she was a balloon.  I only felt safe here when the smoke machine enveloped me, but beyond that and Jack, this was a terrifying yet amusing BRAPA tick!

So, time had ticked on past 1am (doesn't time fly when you're enjoying yourself, hmmmmm....) so I took a taxi back to save my knee further torture.  It is hard to believe some pubs get in the GBG isn't it, and later in the weekend, someone pretty much told me it wouldn't be in next year, but of course that isn't official.

There was a plus side to it though I hadn't realised at the time, because it was past midnight when I visited Bar 19, it was technically done on Thursday 2nd August, meaning 2nd August remains the only date in the calendar which I have done a GBG tick on every year since BRAPA started.  And that is a stat to help send you to sleep if you need it.

Join me for part two later on, as I had a little crawl lined up on Friday 3rd.