Saturday of the Rebellion Punk Festival dawned nice and sunny, and a seagull eyeballed me mischievously as I ate a breakfast lamb samosa on the prom.  I blinked apologetically, like the kind of malnourished 39 year old punk you'd expect to find on the fourth day of a five day festival.

But my heart soared with a kind BRAPA-friendly offer from Colin and Christine (who you might remember from my Cleethorpes blog) to drive me to some of those harder to reach outer Blackpool ticks.  They were making their BRAPA debuts but I assured them we didn't need to see a band til Darlo's finest Gimp Fist were on at 4:30pm.  Convenient.

The pubs I had picked out were at Salwick and Catforth, two places no one has ever heard of before, ever, with a Wesham bonus we'd carried over from our Kirkham day yesterday, and when I say 'we' I mean my punk companion Chris 'Krizbi' Britain, even though he prefers Steps to Sex Pistols, he is a semi-punk regular.

But more excitement as we were picked up from the station as a 'Mystery Guest' was announced, and soon their daughter and the best thing to come out of Chorlton since the Wheelies (I'm too young to remember),  Lizzy Andrew, was upon us as well.   Two can play at that game, as I had my own 'Mystery Guest'.  But because I'm a chatterbox (or gobshite as my Auntie Di says) , I'd revealed the mystery guest before we were even out of Blackpool.   He wears paisley and lives in Preston, can ya tell what it is yet?   Not Rolf Harris.

And he (still not Rolf Harris) was standing outside the pub at 11:50am when we arrived like a colourful lord of the manor.  I was a bit upset though, I'd noticed Salwick had a railway station and the whole reason I'd picked it out was that it looked impossible to get to by public transport!  Oh well.   After a few introductions, I had to get my brain into BRAPA mode ......

The warning signs were there.  Splendid hanging baskets.  A very boutiquey pub sign.  And most of all, a worrying number of hovering people, like wasps, all waiting for the pub to open alongside us as the clock approached that magical 12 noon mark.  And those in the know, 'locals' I think they call them, had snuck in through a back entrance, so even though Christine used her elbows to ensure our group got in first, we still had to be patient waiting to be served.  The beer range was limited, but that wasn't an issue (probably a blessing) as the 'White Witch' was drinking very well, but every table was kitted out with knives, forks and placemats despite the multi-roomed nature of the place.  The locals were friendly in a watchful way, and the onus was put on me to decide where we should sit.  So I chose outside, "is that allowed?" breathed the others in a scandalised way, but I explained I make the rules so yes, whilst it is not ideal, this particular pub set up wasn't going to give me much to go on.  Despite a pool room, and plenty of missed opportunities to have at least ONE designated drinking area.  Outside, I realised this was the most randomest of all BRAPA gangs, but cos I'm a chatterbox / gobshite, no awkward silences.  Someone saw a cat.  A chicken coop looked enticing (if you were a cat), and we sat and I slagged off the pub but turned nervously in case cat or chickens had a pub camera fitted.  Another annoyance was Twasps (wasps who happen to be twats, so all of them) and although Matthew seemed to take a dim view of poor treatment to the creatures, one got a bit too curious and drowned in Christine's White Witch.  "I wouldn't want to go that way .... drowned in Moorhouses!" lamented Matthew.  Colin then kindly offered to drive us all to the second pub even though it meant him making two journeys, so Christine and Lizzy went first.  I went to the loo but the pub was acting a bit weird, a bit chilly and insular I felt.


As me, Matthew and Krzbi waited, we said hi to the chickens again and then we saw a strange moth and thought pub ticker Duncan Mackay would have been able to identify it but he was probably watching Outer Hebrides Under 17's v a Nordic Women Military XI with 15 other people like the top man he is:


Colin returned for us and soon, we were at Catforth where the road outside the pub seemed to be lined with people recognising Matthew (jeez, where we really this scarily close to Preston?)

The pub had water spurting out of the side of the pub like the actual building was having a wee, and that isn't just me being childish because Colin thought so too.  But it was called the Running Pump so it made sense.

Of course, the counter argument to my Salwick tale of woe is "waaaah, rural pubs have to do food to survive in this day and age, waaaah" and yet, you walk into the Running Pump at Catforth, food is whizzing out of the kitchen at a rate of knots, West Lancs poshos and daytrippers are eating, but the downtrodden Simey BRAPA's of this world are just drinking and dreaming dreams of Gregg's pasties next to Winter Gardens, and immediately,  the pub is warm, it has an inviting comfort that the Hand & Dagger might only get on a cold winter night when fire is in.  Conclusion - you can do food in a pub without selling your soul.  That's what I took from BRAPping on Sat 4th Aug 2018 more than anything.  Lizzy and Christine looked like they'd been sat there for hours and were on their 5th pints of the day when we arrived.  Settled.  Just to clarify, they were totally sober.  Probably.  Even when a confused kitchen wench tried to force a plate of meatballs on us, it didn't really matter (turns out the bloke had gone to sit outside without telling anyone - tut tut tut).  Oh, and they all knew Matthew of course which added to our locally feeling.  I got lost going to find the loo, the barmaid didn't even know where the gents was, but she was knew and I guess things like this take time.  No idea what beer I had but it had a purple clip which any sommelier beersplainer knows taste better than red ones.  V.impressed with this one. 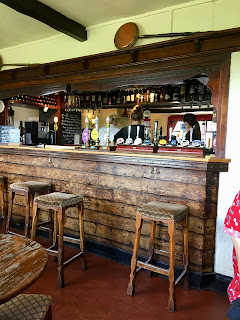 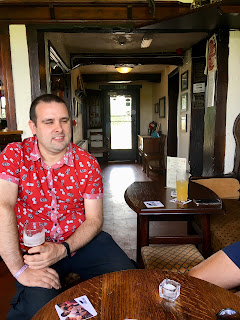 We said goodbye to Matthew so he could stay and talk to his friends, have 10 pints, and walk home across 15 fields back to the Black Horse, not that he lives in the Black Horse probably.

The rest of us got in the Col-mobile and headed for Wesham, which is almost certainly pronounced Wesham but a couple of people said 'Wessum' just to throw that 'Daresbury' 'Davenham' doubt into the mix.  It was just around the corner of the station we'd been at yesterday.

Classic street corner local, ultra friendly and full of excited AFC Fylde fans about to go to their first game of the season.  These type of pubs are the reason I do BRAPA!  It had that wonderful pre-match sense of anticipation which we used to get as Hull City fans many years ago, beers from Old Mill (south York old school!), a 'benign' resident ghost I sadly wasn't aware of at the time.  Most people were watching the lunchtime kick off, Leyton Orient equalised late against Salford and the pub cheered with such ferocity, I thought the LEY stood for Leyland and people liked their Lancs teams, but maybe they all hate Salford.  Weird anyway.  As the crowds dispersed (and not because I'd arrived to judge them all for once), and I was trying to keep an eye out for visiting Bromley fans, Christine launched into a homemade quiz which started with a Scunthorpe round for Colin and Lizzy but answers like Paddy Madden just kept eluding them, and pretty sure I won with the Hull City section not that I'm bragging or owt. Krzb was probably sad there wasn't a Sheffield Utd round, but even the benign ghost wouldn't have approved of that, so it was time to get back to Blackpool for some PUNK ROCK!


Back in Blackpool, the Saturday atmosphere was electric and there were so many people milling about, many more than on Thurs, Fri or Sun.  Gimp Fist were amazing, as were the Briefs and then Cockney Rejects were good too even though the Roger Protz's of this world tried to squash me in the pit. 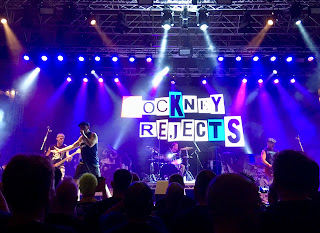 But then we had the added bonus of 'pre-emptives'!  More on them on Wednesday (I'm off to the Carabao Cup tomorrow in Sheffield Tuesday - this is confusing) and then I also need to tell you about our day in North Derbyshire on Sat just gone.