BRAPA Special - Photos of my Pubby Past

Hello, I'm too ill for Friday night ticking, off work and bored, so here's something different.

I 've found some old pub photos in the BRAPA vaults (which of course contains the corpses of several twilds, hipsters, people who like blocking the bar area and people who don't use their Wetherspoons vouchers in a timely manner).

So here's some photos from the pre-BRAPA days which I want to share with you, from a time when I was allowed to enter a pub without a green highlighter pen and a heavy book........ 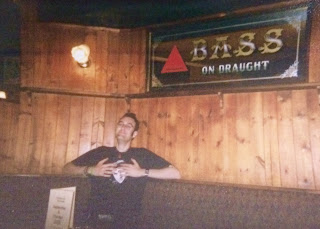 1. John Watson enjoying one of his all time favourite pub experiences in Coach and Horses, Shrewsbury back in 2005 - we had a great time drinking ales like the wonderful Slaters Top Totty (probably banned now!)  We sat in this large snug (note the Taylor-esque mirror) and were joined by a nice student being embarrassed by her jolly parents.  Is Shrewsbury my favourite pub town ever?  It must be up there with the very best. 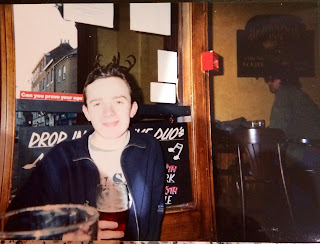 2. Here's baby Simey - on my 23rd birthday (6th May 2002) enjoying my second ever visit to the Last Drop Inn ,York after a huge family meal at the Maltings.  It was a very smoky atmosphere so we only stayed for one pint because my Mum isn't very good with pubs and culture unless she's in Llansillin.  Note the ghost of Dick Turpin dressed as Liam Gallagher trying to haunt me from the corner. 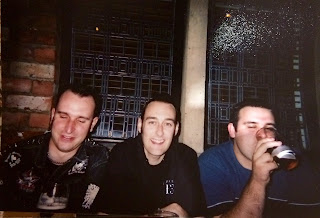 3. My York pub buddies Jig, John and Krimbo enjoying some yesteryear fun in front of a beautiful leaded window in what is perhaps York's Roman Bath, though the word 'beautiful' has never been associated with that shithole before or since. 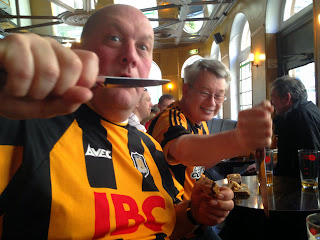 4. You might be forgiven for thinking Mark Bainton is some kind of Hull City hooligan but he was simply in high spirits in the Craft at Farringdon before some Hull City FA Cup related fun.  Alan destroying the table behind him is much worse behaviour.   But then again, playing Sheffield Utd brings out the worst in people. 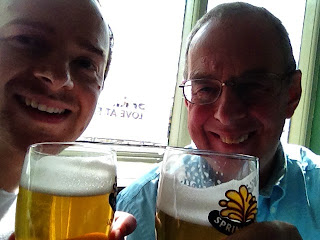 5. Me and Dad in a fantastic street corner Springhead pub in Newark called the Vine.  I've never seen it in the GBG since BRAPA started but we much preferred it to the vastly overrated Just Beer Micropub and Prince Rupert and possibly one more.  I wonder if it still exists and why it doesn't get in the Guide anymore.... 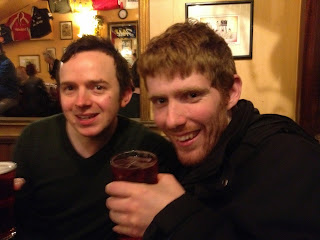 6. Me and Tom "post match" enjoying some Waterloo fun in the Hole in the Wall after a postponed game away at Portsmouth in early 2012.  But the fun was only just beginning as the craziest snow storm ever delayed trains back to York.  Amazing day. 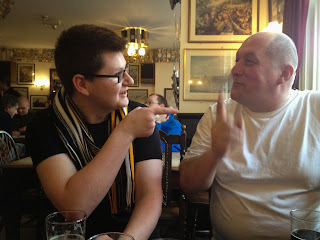 7. Mark Bainton is back again, this time arguing with Ben Andrew in the wonderful Nag's Head in Reading, our 2011/12 away pub of the year.  The subject of their heated debate?   Well, it probably involved a swiftly drunk bottle of a blue alcoholic beverage in a Swansea Travelodge reception area. 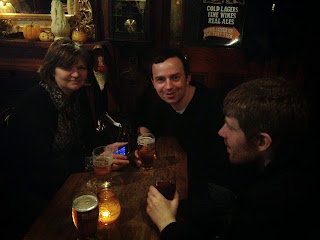 8. The King Charles I was, for a short period of Hull City away history, our "go to" London commuter pub not far from King's Cross.  Problem was, it was always either closed, impossible to find, selling 7% Brodies beers only, or the landlord was being brilliant in a psychotic way and chucking out anyone who blinked in the wrong direction.  Here, me, Tom and Christine sit in the dark trying not to be conspicuous. 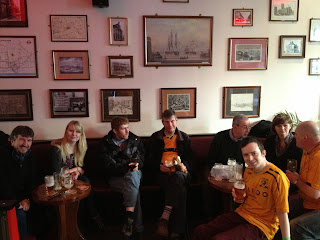 9. The Exchange, Hull threatened to be the successor to the Wellington i.e. the best pub in Hull ..... well for about three months in what was perhaps the most short lived real ale pub venture ever.  Shame cos the landlord was passionate about his ales, especially Brown Cow ones from somewhere near Selby.  A bit like a large MicroPub before they became a "thing". Here we are with our Scunthorpe friends on a Dad birthday match before a thrilling 0-0 draw v horrible Doncaster Rovers.  Only photo of this pub in existence? 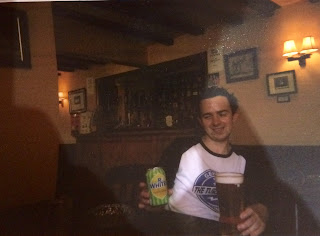 10. Back in 2005, I weighed up the merits of a pub-brewed ale against a can of R-Whites lemonade in the famous All Nations in Madeley, Shropshire.  Did I end up making the most unacceptable shandy ever?  Am I a secret lemonade drinker?

11. On the same day as above, I randomly found myself in a Banksies pub called the Pheasant Inn.  It was quite dull and down & out.  John Watson took perhaps my first BRAPA style pub photo.  I think it was somewhere near Coalbrookdale or Ironbridge.  I wonder if it still exists?

So there we go, that was quite pointless but fun wasn't it, so bye for now.  And cheers!

Time to get myself well for Preston.