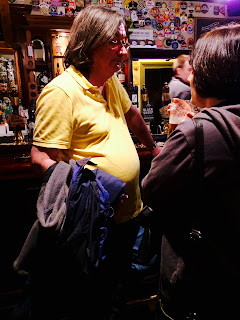 It started with a pre-emptive recommendation in Bolton from a nice but down & out Monkey Hanger, and it ended with a toilet annoyingly hidden behind a bookcase in Grantham.

Yes, it has been a difficult month for BRAPA, full of cold weather, aching limbs, coughs, splutters and shut pubs.

25 GBG pubs is my poorest January total to date (average 29) but with 4 pre-emptives which you could all make a fairly strong case for getting in a future Good Beer Guide, it isn't too bad really.  But when you compare it to say, Martin Taylor's productive month + foreign adventures, well I can't wait to be RetiredSimon!

When I did get in pubs, the standard was generally good, so let's look for 3 winners and 2 losers.....

So, I'm up to 1227 pubs in the current Good Beer Guide, almost back at the 1236 mark that I reached before September's excruciating cross-ticking session.  1971 GBG pubs in total, it might be more if I really looked back through previous editions with a fine tooth comb, but 2000 will be a good landmark I can achieve in Feb.

I'm optimistic for a much more productive February as I go on my first 2018 BRAPA holiday on Monday!  More on that on the day, just got to get well first as it's a big week in store in a place I've never set foot in before.  And that's partly because Preston is coming up on Saturday, 4 pubs to do there plus more Hull City misery sandwiched between.

The month also sees a return trip to Liverpool to tick off six newbies, and thankfully Hull City's away cup tie with Chelsea has been moved to a Friday so I can finish Bucks without the 'shall I go to the match?' conundrum potentially impeding my progress.

As for my Friday nights, reachable Yorkshire options are getting a bit thin on the ground so I might recommence the Greater Manchester ticking sooner than we think.

It won't be a record breaking month (56 last July will take some beating) but plus 40 is on the agenda!

And looking even further ahead, Cambridgeshire starts officially 10th March, I might even get back to Cheshire sometime too.