Leaving the Alice, I went to check out the Guild Ale House in case there were any of Si's usual blog topics wandering around.  "Twilds" were absent, sadly, but the famous Guild Ale House dog, Luna the Black Lab was roaming around the floor.

Luna, as regulars know is a fairly docile creature.  She's generally found sitting in front of people waiting to ask the bar staff for a Bonio from the jar, or sticking her nose into people's carrier bags in the eternal doggy quest for food.  There have been rumours of her dropping dog toys into people's pints to get their attention, but personally I have never seen this.

My curiosity sated, I went to the the Twelve Tellers (the nearby Spoons) for food.  Having had 5 pints already, I forsook the Bud Light offer and stuck to Pepsi.  I was still fiddling around with the app when a server brought a tray of 3 drinks to my table.  I assured him that, no, it wasn't me who ordered them and he took them away.  The same thing happened again when I was halfway through my pizza.  Usually these things happen when I tell people my table number on Twitter (some people like a laugh).

Finding the Black Horse full, I went into the Caffe Nero opposite.  I'd not been in for 18 months, but the Barista recognised me and my then-regular order.  Apparently, I stand out and am easily remembered.  I can't imagine why.  Going upstairs to my formerly-regular table, I put the text feed from the Preston-Hull game on my phone.  Apparently, North End were ahead due to a dodgy penalty, but otherwise my pre-match prediction would have been right.  I messaged Si and said I'd meet him and Tom at the bottom of Sir Tom Finney Way after it finished.

So, there I was in persistent Preston drizzle, in the dark, waiting for Hull City fans.  15 minutes I waited, but again Simon had defied accepted geographical theory and gone a different way.  Not fancying Church Street again (it's the local place where you go if you want your head turned into a different shape), I went down Ringway past the Bus Station and thence to Lancaster Road.


Si and Tom were easily spotted in the GAH, being the only patrons who appeared to be under sixty.  As all the tables were taken, so they were perched on the shelf at the back near the stairs.  Simon assured me that Luna had been lovely and not at all twoggy and that the Reedley Hallows was the best pint he'd had all day.

I could see that both his and Tom's eye's were constantly being drawn to the house copy of Times with a photo of Gillian Anderson prominently displayed.  I turned it over, saying "There'll be none of that sexist stuff here.  Not within the sight of signed Melissa Cole books."  Ms. Cole had done a tasting here six weeks previously, and the owners had thoroughly de-objectified the place, even taking the pump clip for Bank Top Old Slapper down.  We would hate to see such progress reversed, surely?

Si announced he had to do his final tick by 7pm, so we left and went down Fishergate.  I indulged my tour guide fantasies by pointing out the closed cinema where my mother had taken me to see Police Academy 3 in 1986 (an act surely classed as child abuse nowadays), the brightly lit Ann Summers shop and of course, the local branch of Mr. Everitt's employers.  Being an ethical man, he declined my invitation to go in and get me some money out of the safe.  Tom pointed out he almost got a job at Santander (where I bank, so to speak) once but was turned down on a technicality. As I pondered my hard-earned cash being used to help pay for unlikely accumulator bets ("1p on the Titanic spontaneously refloating, Peru topping the medal table at the Winter Olympics AND Hull City winning away before 2021!") we said goodbye to Tom at the train station and carried on down Fishergate Hill.

The Continental, Under A Railway Bridge Near A River 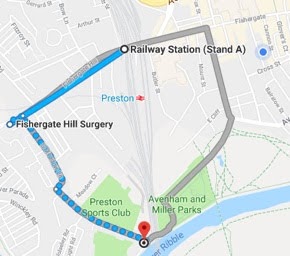 Actual route from Station to Conti
​
It was at this point that Simon's pub route became clear.  He'd looked on Google Maps and assumed The Continental was near the station.  And as the crow (or indeed, the owl) flies, it is.  But that's not how the roads were set up in around 1800, so it's a 15 minute walk.  Si had clearly heard the stories about me becoming irrevecably lost in places like Stockport, Manchester and London and kept glancing at his GBG app blue dot to ensure he was going in the right direction,  Despite such endorsements of my sense of direction, we got there first time (you turn left at the burnt-out Cricketers Arms and go past the Hindu Temple and the Infant School).

He seemed disappointed by the interior, what with the dining tables, children and general lack of pubby atmosphere.  The beer from L**ds was acceptable and we supped them in between me being waved at by people who recognised me (again, I don't know how it happens).  I assured Si this was normal "If you drink in Preston long enough, you not only know the local characters, you become one."  Somehow he didn't seem assured. Oh well.

Si's train was at 7:30pm, and a managed to safely guide him through the coal fire smoke and darkness back to the station.  I assume they looked after him well.  Me?  I went to the Greyfriar (the other Preston Spoons) for a drink as I needed change for the bus. The Ruddles was £1.99 and all the better options were £2.29.  As I needed a pound coin, I went for the Ruddles.  I got 3 pound coins in my change.

Such is life in Preston.