South London might not be, on paper at least, my most eagerly anticipated area of the Good Beer Guide to complete, but casting my hazy memory back to Saturday, I must admit I was highly impressed with the beer quality, and most pubs, if not the lack of beermats!

It all started on one of those fantastic winter mornings with hot breath and bright sunshine illuminating the amusingly named Penge to almost technicolour levels of joy.  And like all good pub holidays,  it started with a 'Spoons ......

I was served my the most unpromising looking "team leader" ever seen in any workplace organisation.  He squinted at me through thick rimmed glasses, scratched a glue ear, wiped a trail of snot from his nose, before finally gearing himself up to make Tom's blackcurrant cordial.  I liked him, he got the job done.  To spice up his drink, Tom washed it down with some Amoxicillin for a chest infection, but no one would bat an eyelid in here as everyone in this wonderful 'Spoons seemed to be on medication and played by Paul Whitehouse.  There was a cosy fire which seemed as rare for a Wetherpsoons as did the lack of beermats which I'm gonna keep mentioning(!), and perhaps the jam-jars offering the different shades of dark brown on offer.    A man with a white stick eagerly went up for his third coffee re-fill, perilously close to our table but I admired his blind confidence.  We admired the pub carpet (a unique one for every Wetherspoons, so I hear) so I tried to remember how Romford's Moon & Stars carpet differed.  With the whole pub now seemingly returning for free coffee to wash down their whisky (were we missing out?), it seemed that providing you could prove Dickensian descent, you were entitled to it.    There was also a vague Wizard of Oz theme I didn't really understand, but it just added to the fantastical quality this place possessed.

Once we'd located the direction of the tram-line, we travelled up towards South Norwood, where Tom had inexplicably arranged for us to come many months ago.  Problem is, he couldn't remember why and legend of the landlady (72 years old?  been here since 1972?  worked here 72 years?  been here since 1772?) was growing in a Jesus-Olives kind of way.....

And this was my favourite pub of the day for being the most pubby.  And our hostess didn't disappoint, as I waited to be served patiently, she seemed oblivious to both myself and an army of frustrated regulars.  Without shouting at her (I'd hate to have been responsible for a 245 year old keeling over), we tried every trick in the book - coughing, rustling change, breathing, going "brrrrr cold out there innit?" til she eventually turned round, bewildered to see a bar full of customers!  I ordered a perfect pint of Purity Mad Goose and positioned myself between Liverpool v Swansea and two tropical fish, who mouthed "Brian Laws is a wanker, is a wanker" in a desperate bid to win pub pet of the year.  It is hard being a fish, I'd imagine, their fish food was on the bar next to the bar snacks and ales, they'd just have to queue with the rest of us.  As Jordan Henderson beat his own record of "most times given the ball away in a BRAPA pub", a man perched at the bar seemed amused by our anti Premier League chatter and as I looked around,  I could really admire what a gem of a pub this is.  When "cold toilet corridors" are the biggest criticism (thanks Dad), you know you are in a good place.


Back to the tram and heading t'other way, we were soon in Beckenham which Dad had decided was gonna be classy before we arrived (oh, and before I renamed it David Beckenham).  The towns love of public toilet schemes was an encouraging sign, even if I did walk us the wrong way round to the pub.  My phone died already (stupid iPhones, hence no outdoor picture and forgot to do it on way out).

Maybe more what you'd expect from a South London pub in 2017, this was light, bright and breezy with relatively jolly young staff and an unhealthy smattering of plastic Scousers, always the worst type of armchair fan which I've never been able to shake off since I was at primary school in Saffron Walden in the mid to late 80's!  I ordered a cracking pint of Proper Job (one of my faves though not a universally popular ale!)  and Dad lamented pubs having 6 pumpclips stuck on one pump.  He has a point.  Of note was Spiderman climbing a wall in the corner (best Spidey pub action outside Llansillin), Tom's disbelief at a tomato and onion salad, the "incredible shrinking dog", and an insistence of visiting ale drinkers providing Whatpub ratings which is good, and am surprised is not more widespread.  A third dog was added into the mix "he won't bite, he just gets in the way!" said owner as I hurdled the creature on way to the loo.  I think we were justified in our celebrations at a Swansea winner, and we turned round and smirked to see the armchair fans were suddenly claiming they "didn't care!" and went outside to smoke.  Losers.  But not me,  Or this pub, another good 'un. 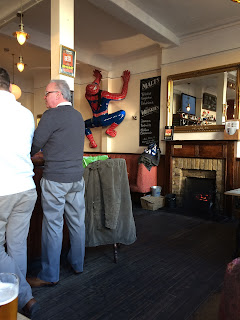 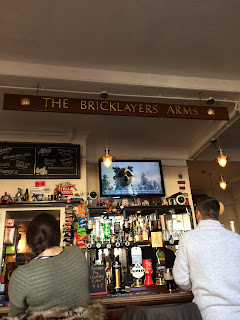 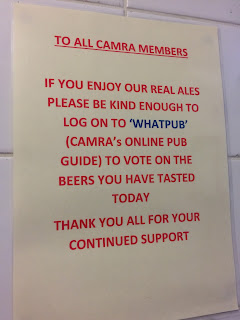 Three South London pubs, three positive experiences!  What's going on?  Tom had unspecified misgivings about a trip to Gipsy Hill (or Streatham Hill where he lives in constant fear of his Aunt, the only person I've ever known to scare him) so took us instead to Shortlands, which is kind of part of Bromley and is kind of in Kent but it isn't, very confusing! 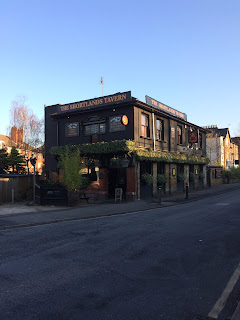 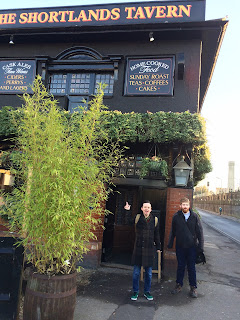 If that was bamboo outside, I'm sure I once read that if you see bamboo outside a building, the inhabitants are swingers.  But I tried to put this thought out of my mind.  I was soon lamenting my THIRD beermatless pub of the day - my Watney emergency one was getting quite a hammering already as it propped up my Brentwood Maple something or other mild.  The pub had a well-heeled middle aged crowd, was a bit foody, so was time to be a hypocrite and say if you can't beat 'em join 'em (our sandwiches hadn't been filling enough) and after Dad was served ("Can you advise me of your seating arrangements?") I was soon wolfing down a superb Thai Green Curry (despite declaring my hatred of Thai food) and needed an extra half of "Plain Ale" to wash it down which might put me in breach of BRAPA regulations, though I invented them so I don't care.  Although the pub had that unmistakable "we've tried to make it appealing for your less traditional pub goer", it had some nice dark wood, etched glass and something of a community feel to keep up the whole "I've been wrong about S.London" vibe of today.

So, the 1,000 was upon us and we (Tom) decided on Brixton.  Dunno if it is me but the stereotype I had in mind was something youthful, fun and vibrant, and to get off the train and see a man with dreadlocks singing to a ghetto blaster in the street whilst skinny hippie girls danced around him (remember I was quite drunk by now), seemed almost too stereotypical to be real, but I was loving it and was sure Dad was about to roll up a joint given half the chance .....

Standing room only was the only problem here, for 80% of my stay at least - Dad & Tom had to resort to circling the bar to look at some pictures of the Royal Family drinking pints of Young's Special back in t'day to keep them sane.  I was anxious to make pub 1,000 a special event but with the staff busy, brisk and breezy, asking them if they were aware pub royalty was present might make me sound like I had a big ego, so an indoor photo had to do (and Tom couldn't even be arsed to smile for that!)  On a happier note, Tom found an ice-bucket to decant his erroneous 'ice' into, pubs do occasionally insist on serving blackcurrant with ice no matter what the instruction!    In many ways, this was a better pub than the Delph in Orrell where I got my "fake" thousand up back in August, but the fanfare for this one was less great if Twitter was anything to go by.  Well, we eventually got seated in some comfy armchairs though Tom and Dad had to get back for their trains, and I was left listening to some crazed girls jabbering on about Brixton Academy as though 'live' music had only been invented in the past 24 hours.  I dragged myself up eventually and headed towards Croydon.

I was staying two nights in Croydon (a last minute decision as I was meeting a friend in London on Monday and it hardly seemed worth heading back up to York for one day!)  After checking in to the cheapest Travelodge I could find, it felt only right to get a bonus tick in at my closest pub.... 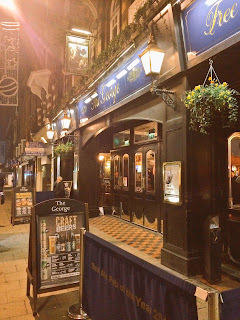 In perfect pub symmetry, we ended the day as we'd started, in Wetherspoons 'heaven'.  It did occur to me that Croydon had this 'reputation'. and 'Spoons at 8pm on a Saturday has a 'reputation', so it was with some trepidation that I pushed in between a Red Bull and Vodka drinking pair of local scroats to order some strange but perfect ale from Tillingbourne , wherever that is (clue, not Yorkshire).  Handing over my '50p off' voucher in these circs was comparable to asking for a nudey magazine off the top shelf!   I took my ale to the darkest, quietest corner ledge, observing the locals like Attenborough on a Kenyan safari (I'm not calling them animals, I don't think).  But to be honest, the atmosphere was convivial for the most part, apart from one drunk chap who crawled to the loo and never came back, which was reason for concern for one of his friends, but a source of much amusement for the rest of the table!  Some felt he'd slipped out of a back window.  Somehow.

It was off to bed with my Waitrose snacks (living like a king!) as I'd be up early for my unscheduled "day two" pub -ticking on Sunday.  I'll write that report tomorrow.

And for those of you following me on Twitter, a couple of bonus North Yorkshire pub ticks tomorrow (and one on Fri, three on Sat) I'll be getting under my belt & reporting on.  By the end of this week, I reckon I'll be  quite a bit closer to finishing this impossible county!