BRAPA - From Tipton to Farsley


So, a New Year and plenty of exciting (or not) BRAPA pubs to visit and write 'lovely' things about ...

And that has actually been true so far, as me and Dad arrived in a chilly Birmingham New Street station on Bank Holiday Monday morning to find Tom leaning out of the Tipton train like something from a Brummie Brothers Grimm Fairytale.  By Sandwell & Dudley, Twitter legend West Brom EL had hopped on and soon the four of us were skidding on the icy pavements towards the first BRAPA pub of 2017 which El told me was once owned by the Tipton Slasher, William Perry, Champion Boxer - amazing the facts you'd miss without local knowledge.

And an excellent start to find a warm traditional no-frills pub selling Titanic Plum Porter (a fitting first pint of the year which El realised I wanted before even I did!)  An early candidate for most inappropriate footwear of the year came from an old man propped against the bar like he'd been there since New Year's Eve, some weird slipper things which I couldn't stop scowling at, they really offended my sensitivities in view of the slippy pavements.  I couldn't observe all due to being "sociable", but the pub had a nice bolshy atmosphere going on so when I noticed a barmaid giving a stern telling off to a customer for trying to steal a cob from the cabinet (this is obviously the type of pub that does food in the proper pub way), I smiled over thinking it was done in jest only to realise she looked red-faced and properly angry.  Was she planning on becoming a modern day Tipton Slasher I wondered.  We squeezed in a quick half before the bus, Hobson Town Crier (which strangely has been following Dad around all Christmas - not literally) was on, I let him go to the bar under the circs, whilst Tom picked up a cob but did actually pay for it which was something of a shame.  A pub everyone should visit.  I even let El use the green stabilo (best brand) highlighter to 'tick it off'.


After a meandering bus journey around some crazy Tipton-ish estates, we arrived at pub two which was near an area closer to West Bromwich called Great Bridge .....

Yes, it was pretty evident from the moment we stepped inside that we were in a classic.  Dad even temporarily turned into a Tony Gubba football commentary .... "OH I say, This is it, This IS IT, quite remarkable, oh yes, it's there!!!!!"  Even the unflappable barmaid who has probably seen everything in this pub looked half amused by his thrilled reaction and it wasn't long before Dad was telling us about 'linen fold' architecture in the bar design - which is enough BRAPA culture for the entire year thanks very much.  El went for a cigarette break, Tom tried to remember why South Norwood might make such a good day out, and me and Dad took great joy in finding a fault with the pub - 80's music videos played too loudly.  And when that changed to Sinead O'Connor's crazy crying bald head, you could almost tell by the emotion in her voice that she was singing Mike Phelan's death knell.  It was that kind of pub.  An early contender for pub of the year? 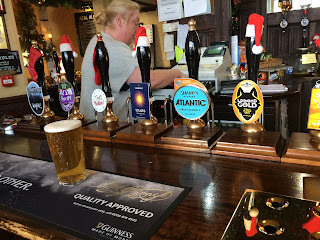 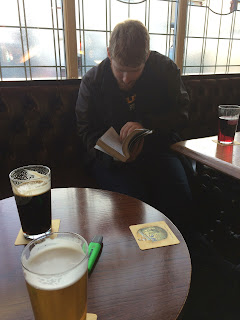 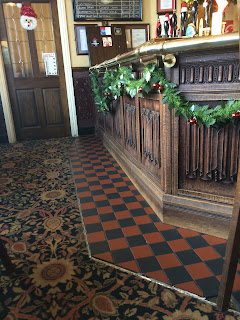 After some expert bus-hopping from Tom had us in West Bromwich in ultra-quick time, El took us to a pre-emptive (we didn't have time for the Crown & Cushion*) which I think he felt confident would be in next year's GBG.....

The only pub in West Brom I really know is the Vine, and this felt strangely reminiscent, only slightly less long and thin.  El ordered us an "Old Ale" by Holdens before we could blink (well me and Dad, this would have been a harsh ale introduction for Tom) , they sadly didn't do pints but it was beautiful hybrid of tarmac and syrup, just how I like it.  I heard on the grapevine that this ale makes over 60's quite obstructive and sure enough, soon Dad was claiming he wasn't going to the match, until he was brought round again with the remedy, a quick sip of Black Country Bitter.  This pub had this fantastic family community feel but I think they went a bit too far when a barmaid plonked her twild ON the bar whilst I was getting served, is there anything sadder than a Bar Twild who hasn't learnt the joys of getting smashed on Old Ale?  Probably not.  Lovely pub though, best get in t'GBG.


After 45 minutes of good but frustrating stuff from Hull City, we were subjected to the most spineless second 45 ever.  "Phelan has to go" I said, which means I now have the same brain as Ehab Allam.  Which is depressing.

But when I said to Dad after approx 80 mins "oh well, consolation is at least we can get 1 or 2 Birmingham ticks in before our train home!" only to find both pubs (Pure Craft Bar & Kitchen AND Queen's Arms) shut, this was even more depressing.

I mean I know it is a Bank Holiday, it is 2nd Jan, but 5:30pm in centre of Birmingham, I think that is quite ridiculous.  At least the Post Office Vaults came to my rescue (for a THIRD time in my life!) and we had a nice warming underground pint of something from Huddersfield.

A great day out, despite various hurdles (and I tripped over a road sign in Brum and am only telling you this because Tom said he'd shame me if I didn't cos he's evil!), and lovely to meet El who may get a full time West Midlands BRAPA contract if he can keep up this good form in the January window.

* A weird trend is evolving, the "reverse pre-emptive".  It started on Boxing Day in Barton when I asked Christine Andrew how come we weren't ticking off the George Inn.  She indicated that's because it probably won't be in the GBG again (next year at least!).  And I sensed something similar with Crown & Cushion (even though we ran out of time anyway), a bit like no-one really believed it was a GBG pub.  Interesting trend which I'll see if this continues and let you know.

Fast forward 24 hours then after a knackering first day back of work, dosed up on honey & lemon to stop "cold number 4" from taking hold, I'm legging it down a windswept Old Road in Farsley.

I knew the shortcut from New Pudsey railway station from the days when I used to go round to my friend Emily's house for cottage pie and a game with the kittens.

I walked fast and was at the pub in about 15 minutes, passing weird shops with names like "You are takin' the Pizza" and "Window to the Womb" (and I thought Pudsey was weird).

I know a lad who went up to the bar in this pub, asked for a pint, only to be told be a stern barmaid "this is a golfers pub you know!"  It didn't stop him being served when he asked, she just thought he should be aware.  So dressed in my finest tank top, tartan trousers and carrying a niblick (kidding I promise), I strode confidently up to the bar where a friendly 18 year old bar boy had boring pub questions for me.  (a) Did I want to try the ale first?  NO!  (b) Did I have a CAMRA card?  YES!  (c) Did he want to see it?  No, I had a trustworthy face (not his official words, it was more "no one would lie about being in CAMRA").   All the staff were remarkably young considering the fierce "if you're not 25 you better bloody prove your 18 okay you fresh-faced shitbags?" signs all over the pub.  A friendly newbie blonde barmaid smiled at me, but didn't know how to spell "Excelsior", but we'll forgive her on account on being blonde and from Farsley.  I sat in the front bar where I was joined by Seasick Steve (lost on his way back from Hootenanny) and he provided unlikely drama when he ordered a "Mocha".  This caused a stir with the lively twenty-somethings in the back bar who seemed to be a mixture of kitchen staff and off-duty-staff:
"What IS Mocha?"
"Coffee and chocolate mixed together"
"Does it have marshmallows in?  I love marshmallows in my hot chocolate on a cold night!"
"Errrm no, I don't think so ..... Steve, Steve, do you want sugar?"
"Oooh don't gimme sugar luv, sugar kills me!"

This is exactly why pubs are amazing.  I had to feign interest in a circa 2001 re-run of L**ds playing away at the Gooners whilst this was going on.   Nowt else happened, I just sat in a corner and tried to be invisible.  Oh, a bald man called Martin came in, danced around a bit, told Steve "I'm off to do my hair".  Steve asked if he was having a wax.  It was time I left. 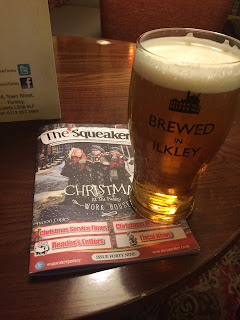 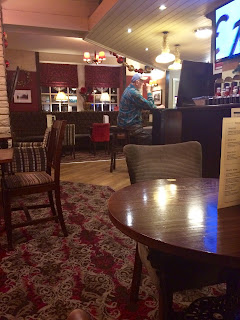 After a 15 minute hike back up t'hill, just managing to get the next train, I was sweating and exhausted but glad I did it though a hard one to get motivated for before.

My next two West Yorkshire places are both 12 miles from Leeds so which do I choose first?  Well, one has weird opening (well, closing) hours on a Tuesday so I might be there sooner than you think.

Have a jolly good evening and see you all soon,