Two of the top pub types of "this time in our history" are Wetherspoons, and Micro Pubs.  Like 'em or loathe 'em, they form the basis of the "Wath Upon Dearne Real Ale Scene" (WUDRAS) , proof that the small town is "on trend" which isn't something anyone's ever said about South Yorkshire before, ever.

After a needlessly long and boring bus ride from Barnsley (I should have done Swinton and short bus, said my new work buddy who went to school here), I realised there was a very pretty pedestrianised centre called the Market Cross.  Just the odd bus occasionally skulked in and out. An edgy atmosphere was created by drinking, smoking, shouting and swearing "Yoofs", I counted four pockets of the shitbags in the otherwise peaceful dark gloom.

In summary, Wath-upon-Dearne is Newbury with menace. 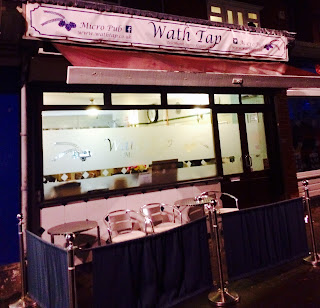 On the recommendation of a local Twitterer, I decided this place, "Rotherham District's First Micro" had great pre-emptive potential, and whoever he was, by gum he wasn't wrong!  I entered to see that classic staff combination of bawdy mother and easily embarrassed daughter, who was serving.  As I scanned the six ales on offer, mother winked and said to me "she'll let you taste 'em if you are good!" to which I should've used my stock answer "I like to be brave and dive straight in!"  On this occasion though, I was tongue-tied as daughter explained "can you tell she's my Mum?"  "It's my job to embarrass her" replied Mum.  The only other customer, who I later discovered was a deaf man called Dave, was eating takeaway fish & chips at a side table, using the pub's own cutlery.  He helpfully tried to show his gratitude by going behind the bar and putting knife and fork in dishwasher but he managed to jam it so it wouldn't close!  It wasn't a good night for Dave, a car alarm sounded and the four new customers had to shout "DAVE, DAVE, DAVE - IS THAT YOUR CAR ALARM?" three times.  He eventually went to check on it, for Shitbag Group III had been causing mayhem right outside the pub.  I was sat on the back window nearest the door and it was JUST like that "Shaun of the Dead" scene where the zombies can't quite get into the pub.  A new customer was raving about the Stancil Movember Stout (which I was drinking and loving) so I joined in, although his wife told him "he wouldn't want a whole pint" which was wife speak for "I don't want you drinking a whole pint".  A former butchers this place, had some nice tiling, and was a great hilarious pub experience.


I dodged shitbag groups I and II whilst IV were stood next to a police car which tried to scare them by driving up and putting it's sirens on briefly.  But a screechy young lad just laughed and said "I know how to nick those things so you can just fuck off" to which the police car obliged, making an embarrassingly hasty retreat.  I felt like I was missing something .....who's in charge?  The kids?

So could this be the brilliant Spoons equivalent of the excellent micro pub?  Well, no because that was in Maltby.  Not that early signs here were too bad.  The bar area seemed cosy, intimate and warm and was lined by moody old locals who weren't gonna move to let me in.  One middle-aged barmaid did keep smiling sympathetically at me, but she didn't bloody serve me and about ten minutes later, I'd changed my drink choice about 5 times before a man with unusual earring finally appeared.  Most of the beers were from Little Critters who I believe are the only Sheffield brewery who don't specialise in pale ales so there's some fake trivia to tell your friends.  I wish I'd perched in the bar area because further back, the pub became more classic Spoons.  Draughty and foody, one old man was wearing a dirty vest and not much else which in a weird way, was quite heartwarming.  Most of the clientele were quite old and had to walk past me to leave the pub - interestingly, they all smelt like old library books.  Yes, I had to make my own entertainment as it was all a bit boring.  I was next to the condiments counter - FIVE bottles of mayo, all with less than one squirt left in them.  Upsetting times, and don't get me started on the lone mango chutney.  There was some extra seating upstairs, but who should be up there with the cool kids but Bawdy Mum?!  We nodded to each other and she inexplicably said "I'm here for a ...meeting!" before two women who looked suspiciously like her mates walked upstairs with an ice bucket of Prosecco.  I'm not judging you luv.   My new work buddy Dave tells  me he spent most of his sixth form in here - it is that kind of a pub ........

Bus 222 was delayed, and the bus driver was one of those maniacs determined to make up the time even if he killed all his passengers.  Not that it stopped him stopping parallel to a car with it's lights right up, to open his door and tell the young female driver THREE TIMES "you're dazzling me you muppet!"

That summed up the whole evening.  Loved it.  A return to SY form after the Wales disappointment last week.

Bonus Archive BRAPA News (might be a bit boring unless you are hardcore).

And better news today when I realised I'd forgotten to tick off George Hotel, Easingwold, North Yorkshire (we'll call it pub number 948) and I'll archive it now .....

"Me and John Watson decided to have a car-trip out of York for Hallowe'en one year to do something special as we'd booked the day off and you can't really do anything spooky til late at night.  I think it was a Friday so that'd probably put the year at 2008 (I guess it could've been 2003, I really have no idea!)  Anyway, we parked up with the intention of having lunch and was quite a nice carpetted old Georgian pub.  I actually remember having Pendle Witches Brew by Moorhouses and though it was a beer I was aware of, I'd hardly ever had it or seen it before so it was quite exciting(!) honest.  Food wise, I had this incredible pork cracking sandwich/baguette thing where they made a big deal about "locally sourced pork" so I made a very Dad-esque joke about them going to strangle a pig at the back of the pub as we speak.  It wasn't funny then, and my vegan sister didn't approve when I told her either."

Additionally, I honestly thought I could finally nail the "middle" pub I went to in Worcester on 10th May 2007 but am still struggling.  No guarantee it was even in GBG as a weird man who "adopted" me chose it.  I'll try and describe it and you can try and help.  It must be a short walk from Cardinals Hat, it isn't the Dragon or that as they were pubs 1 and 3.  I think it was near Cathedral too.  It may well have had a tudorish frontage (if not, old looking) and it was wonderfully old inside too.  Lots of beer mats on ceiling and walls - wooden and basic, not carpetted.  Lots of ales on offer.  Did have, I think multi-rooms, or at least dividing partitions and wasn't tiny, but ceiling I think was quite low.  I saw some recent Worcester pub pics on RM's excellent blog but not quite ringing any bells (don't think it's the Bell).

And the pub in Royton I went to before Oldham away on 28th March 2005 that I was hoping was the Bull's Head Hotel definitely wasn't, but most likely the Dog & Partridge and it had one of the most miserable bunches of customer I've ever witnessed, despite being a proper classic JW Lees boozer.  The only other option could have been the Puckersley Inn but I think we'd have chosen the nearer one and this looks a bit rural anyway.

Saturday sees me kick off West Yorkshire pubbing again with the winter woollen crawl.  Three have pulled out, one isn't drinking for health reasons and one gets scared whenever she has to get a train anywhere - so it is gearing up for a classic already!