It was a long overdue pubby return to the city where I spent my uni years from 1997-2000, just before they started to modernise it with things like a Metro link.

I was joined by two rare BRAPsters, John Watson II (Sunderland's finest, so providing local knowledge) making his first BRAPA outing since June 2014 and Krzb Britain, who specialises in areas just south of York but is a fine navigator.

The trains were a bit delayed but not a bad thing as we'd have only been hanging around til 11am opening time, as we took the Metro from N*wcastle to SSOL (which stands for Sunderland Stadium of Light amazingly) as were soon walking through the Roker area towards the coast. 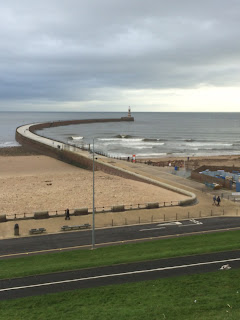 Despite living here for 3 years, I never really knew this area and was surprised what a nice prom/seafront it was.  Same couldn't 'quite' be said of our first pub.....

We'd been looking for the R Bar (part of the Roker Hotel) but with no signs for it, we walked into the most likely looking place and were greeted by a gaggle of pristine shirted staff who looked like they'd walked out of a Persil challenge ad.  The one with the irritating top-knot on his head told me it was no longer known as the R Bar, and hidden around the corner of the bar were some handpumps, mainly Sonnet which explained the poetic name change.  Like Chester-le-Street's Lambton Worm, this Sonnet 'pub' was geared up for diners (even on a Monday morning in Feb) so we sat on a high stool and I drank an IPA from one of their vase glasses which are annoying.  This isn't Belgian beer.  I like Sonnet ales (especially the Bourbon Milk Stout) but this was a bit lacking in quality, perhaps the pub's fault and watching Football League highlights on a constant loop was sending me into mental turmoil as I started having visions of Joey Barton laughing at me.  Behind some glass was a non-functioning distillery which I'm told should be churning out gin by now.  The place was warm and tried to offer a rustic edge, but ultimately failed.

Just around the corner, it was 'landmark' moment time, with my 800th tick, and a nice one too, with some interesting local grafitti on the wall outside which was to be a theme of our day out.  It looked like your traditional seaside bar, and in my experience, these are usually disappointing, but not here as a friendly young brunette (who may be an early contender for that particular 'award') greeted us and was patient as I took ages choosing from a great range of ales.  I went for a Salopian Lemon Dream, and being brave, didn't ask for a taster.  A few serious old Mackems lined the bar, this was a proper drinkers pub even if it was lacking pub atmosphere.  We sat at the wonkiest table in 2016 BRAPA so far and immediately spilled our drinks, and then our friendly barmaid amused the locals by saying the song currently playing reminded her of "Saturday night at the movies".  Immiediately, the chorus started up "Saturday night at the movies" and she felt a right Charlie!  As if the Roker riviera isn't enough for them, this place tried to add a French feel by naming the toilets 'monsieur' and 'madame' which seemed totally uncalled for, but not to worry, a pub well worth visiting.

Or the @venue as it was hideously titled outside, in fact it looked quite awful from the outside still on the Roker side of the bridge, it was a relief to see it open up into a kind of half Working Man's Club, half airy bar, a bit like a much better version of the Corner Pin in York with some of the best bench seating you'll see, great old Sunderland football memorabilia (we sat underneath Cloughie) but also a pool table and a man with those horrendous hooped earrings giving us evils as I ordered a Chocolate Penny from somewhere obscure in Nottingham which tasted a bit like Bovril!  The barmaid tried to be smiley, but it didn't come as naturally as the last girl looking a bit like she was having a seizure, proof brunettes beat blondes every time.  It was a slow burner this place because the longer I spent here, the more I enjoyed it, a good sign of quality.  One word of caution, the toilet floor was so red in the lunchtime sun, that it looked like I had blood in my urine!  It was that kind of place.

Our longest walk of the day took as back over the bridge, down the side past Panns Bank where I lived in my first Uni year, into an area which had some nice old buildings but a lot of gentrification seemed to have been happening too.  Shame we couldn't have just taken a boat from the Glass Centre, we'd have been there in seconds! I'd heard good things about this pub from it's Clarendon days, and it did have the feel of one of those nice out of the way stand alone pubs, like the Brewers Pride in Osset was the example that sprung to my mind.  Sadly, a complete lack of real ale was to be it's undoing.  The landlord seemed a proper canny Sunderland fellow, friendly enough, saying "no ales on til Wednesday!" no surely this is highly unacceptable and I hope the local CAMRA branch are aware it needs de-guiding swiftly and with style.  JW2 told me about sitting here once drinking ale, watching a live rockabilly band, I could imagine how great that would be, all the more depressing!  Taking further positives, my 6% West Indian Porter was a powerful drink, and the pop videos from 1990 and 1996 offered us much amusement.  We should really have walked straight out, but such a long walk and all needing the loo were reasons we lingered.  It's still a BRAPA tick, I'll just have to incorporate a re-visit into the future  After all, I haven't drunk cask in Ivy House, William Jameson, the Borough, the Royalty etc etc so I still have much unfinished business in Sunderland.  I digress, the toilet was a fascinating disabled closet with what seemed to be a "viewing area" for your friends, and a mop handle to help lock the door.  Quirky.  This pub could have been a gem!

After the best Gregg's Sausage Roll you will ever find anywhere, we were soon ready for our final pub of the day ......

In my heritage guide due to the best 'bar back' I've ever seen since the Kingston in Hull (great Mansfield Riding Bitter and Hot Beef Sandwich (RIP)), I was excited about my visit here and it didn't disappoint.  A really friendly and helpful landlord reminded me why I first wanted to go to Uni here (the people of Sunderland on my Open Day) and I gambled on the blackest Saison ever seen, another plus 5% and by now, my drinking speed had slowed considerably and this was one to nurse with it's farmy taste.  Again, the chap admired my "no I don't wanna bloody try before I buy!" hardcore attitude to ale, perhaps.  The pub had great stained glass windowing and was by far the most pubby pub we'd been in all day as the three of us melted into a kind of fuzzy, happy state which meant there was no chance of pushing ourselves to walk to Chesters before the train home.  It actually reminded me I'd also like to visit a heritage pub called the Mountain Daisy in the town but not sure where it is! 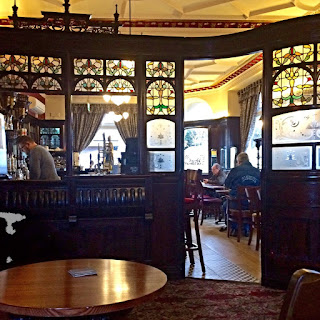 Well, that was more like it.  Time for a MaccyD's and the Grand Central comfort back to York, but don't try and count those table triangles after Saison and West Indies Porter, plus eye spy is difficult in the dark.  No need for York Tap 'injury time', but this was a fine day out and I'm looking forward to my next North East trip already, hope it won't be another year!

I was going to get the South Yorkshire midweek tour up and running today, but it's pancake day and I have a p...p...pancake date at the Green Owl.  But good news, Mr Boilerman (BRAPA Crapper of the Year 2016) might be here at 1pm tomorrow if he's ultra punctual, meaning we may be back on!