Mr Boilerman was here earlier than expected on Wednesday (12 noon) so I should really be thanking the lady who randomly decided to have a lunchtime bath, meaning he couldn't sort her plumbing out (it's gone Confessions of a Boilerman already!) which in turn meant he could sort my boiler first, in time for this bonus afternoon BRAPA trip......

With West Yorkshire complete and no more of North Yorkshire possible on weekday evenings, I've decided to focus on the deep South, perhaps interspersed with a bit of East Lancs/Greater Manc to see if I can complete SY before the 2017 GBG comes out.  And I started at the beginning.....(well, not including Arksey, done in 2014).

After an 'interesting' journey from Donny's bus depot where I passed B&B's with names like 'The Caribbean', I avoided the rush hour traffic (if Doncaster has a rush hour, it is hard to tell), avoided an old man who sounded like Jimmy Savile trying to talk to me about guide dogs "Now then young man", and avoided some shifty looking street youths who all resembled Adam Johnson, to arrive in Armthorpe in beautiful clear blue sunshine!  Phew, that's a sentence you'll never here again.

Quite a grand pub from the outside, it was the old cliche of "walking into someone's front room" (always the best) inside and as I ordered my Sharp's Atlantic, the landlord sat behind me murmured 'good choice lad!'  I was immediately given the 10p CAMRA discount with the landlady's "every little helps" comment sounding a bit supermarkety.  Sadly, the cloudy ale didn't clear and my expression on the 'tangy sourness' said it all, and she offered to change it no fuss.  Even better, the landlord said that if I was willing to wait, they'd put their Purity UBU on and bring it over to me, so I retired to a wonderful 70's style armchair in the sun.  So this was why the only two other customers, old dears no less, were drinking cans of Red Stripe!  You don't get that in York's Pivni I tell you.  The beer when it arrived was perfect quality, sometimes you have to have a bad experience to have a really good one.  And you could tell this pub seriously cared about it's ale.  Or did they just think I was a CAMRA inspector? A bit of drama then as a nice dog got attacked by an evil one in the pub car park, landlady threatening to bar the owner of the evil dog, but it was all done in jest.  Nice dog incidentally was given a free bowl of water, but would rather drink from the dirty puddle outside, showing that 'real' water beats 'craft' water every time!  Perhaps.

I trotted off up to the next place, Edenthorpe only 1.5 miles and thankfully, a subway allowed me to cross the tricky looking A road.  Subway of the year contender for sure.  Edenthorpe was full of 'professional' dog walkers who I nodded to as a hot-footed it past Tesco across the road to my next pub.

The first thing that hit me here was a huge sign declaring this was an Ember Inn, a chain which I'm led to believe is 'not the best' though I'm open minded and also this was never going to be as bad as the Dog & Gun in Wolverhampton.  I entered an almost Happy Harvester type large room, not unpubby but you know the type, 'open plan but partitioned', 'furniture that doesn't belong in a pub', 'eye watering cushion design'.  The young barmaid, a nice lass, was having to be patient as the local nutter was telling her a rambling story about a stolen charity box.  She offered me a (better) CAMRA discount but twice in a row is a BRAPA first!  They obviously like to reward ale drinkers in these parts.  Sadly, the earlier exchange meant she couldn't subtract 20p from £3 which she blamed on a 'brainstorm'.  I sat on the lowest settee imaginable, it felt like someone was about to bring me Sushi and I spent the next 27.5 minutes enjoying a pint of Abbeydale Moonshine, allbeit in pretty much total blandness as women sat around drinking white wine and children shuffled around aimlessly.

So not terrible, but just a bit lame.  Onwards and northwards as I walked another mile up to Kirk Sandall with dusk now falling on this productive start to South Yorkshire midweeks..... 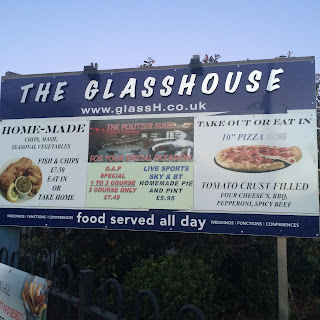 As the GBG informed me, this pub used to have a bar made entirely of glass, "alas, no more" and isn't it sad when they strive to knock any quirky character out of pubs?  It reminded me of my 2014 trip to Doncaster's White Swan which once boasted "the tallest bar in the country", alas, no more there either.  They've kept glass in the name, and on the premises i,e, they have windows!  Otherwise, it was another quite sanitised establishment, though two rare Theakston's ales were on the bar so I sampled both, the staff were young and efficient bringing food out to old people.  I'm not a fan of beer blogging but I will say this, Theakston's bore me and their Noah's Ark (10p of each pint goes to help flood victims in an admirable stance) was cloudy and ironically, you might say, not a patch on a pint of Sam's OBB!  And no, it wasn't a Saison before you ask.  I initially sat on a very squeaky leather chair too near the bar area, felt exposed, but a quick wander revealed a more pubby room which smelt of Leeds Beer Festival's pie and peas.  Wonderful.  This was much more like a South Yorkshire pub but my peace didn't last long as a large family descended, and an excitable young lad beat a strange man called Andy at pool, so I moved back to squeaky chair territory and had a swift half of Theakston's 'Paradise' (it wasn't)  before the train back to Donny.

Back in Donny, I had decided to strategically leave my remaining Donny 'ticks' for another day but the train to York was cancelled so I suddenly was 'forced' into an extra pint, how sad!

It took a while to find this peculiar 'Spoons, but that was because the strange pedestrianised area it was in was not showing up on any of my maps!  Priory Walk or something.  It was oh so quiet, so different from your usual main street 'Spoons rabble and I could only describe it to entering a deserted, haunted theme park.  I've never tip toed in and whispered my drinks order in a 'Spoons before, but it was so peaceful, well eerie.  And before you could say 'Scooby Doo', a very thin man who sounded like Shaggy (yes, THAT one) pushed in, said "Zoiks" and returned a pint of lager which was apparently bottom of the barrel.  Lager drinkers complaining on quality, always makes me chuckle!  Anyway, it had a canteen style look to the seating near the bar, but opened up into a larger place behind with some nice bench style settee seating.  My ale incidentally, from local Dukeries, was my pint of the day and the customer's were all old men grumbling about what was on the news.  A strange but not unpleasant JDW experience.

Luckily, my next train was on time and I was back in York to watch a bit of painful WBA v Peterborough penalties with a chicken kiev near a nice warm boiler!  A good day in all, I've now done 40 South Yorkshire pubs in total but lots still to do so hoping to crack on next Tuesday.