BRAPA - From Harrogate to Burnley

Friday nights are probably my least favourite time for a pub night, as the people who go out generally act like it's a once in a life time event for them.  Combine that with a trip to Harrogate, one of the most twee and overrated places in the UK, and the omens weren't good as I boarded the 16:29 slow stopper from Leeds.  The reason for my being here was that I thought I needed to go to watch a band beginning with the letter "D", but as it turned out, I didn't!  (that's a story for another blog).

Always glad to be proved wrong, I ended up really enjoying my first BRAPA Friday evening ...... 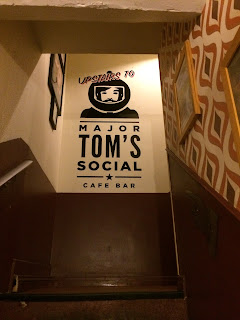 "Ground control to Major Tom" and all that Bowie bollocks (too soon?), I walked past a few quirky spacemen models on the way upstairs and for a minute, I thought this might be real ale's answer to Leeds' now defunct Fab Cafe, with it's wonderful sci-fi atmosphere and terrible Erdinger.  However, whilst Fab Cafe was unashamedly geeky and non pretentious, this place opened up into a welcoming but rather trendy room, the music sounding like it had come from a Brazilian adult movie.  I was not surprised to be served by a young chap with severe beard, tattooed arms and beanie hat.  Meanwhile, a young lady was ordering a warm glass of prosecco and paying very slowly by credit card.  Her boyfriend ordered something keg and American out of the corner of his bearded mouth.  Even my table, with it's warped wood and 2p coins shoved in the cracks seemed to scream "look how cool I am!".  The beer was wonderful, an exciting local range and the 'Pride and Joy' was so nice, £3.60 seemed worth it!  The general feel was unthreatening for a lone drinker to pop in and relax, I couldn't imagine doing that at Friends of Ham, as I sat under some very knowing old fashioned 80's TV's.  Could have easily stayed longer.

I then took a train to Knaresborough with mainly very excitable school kids and although I walked totally the wrong way, my next pub was not difficult to find. 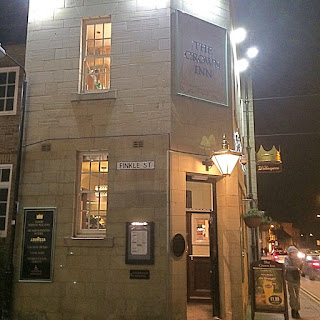 Not many people visit the lovely market town of Knaresborough with the sole purpose of visiting a Wetherspoons, but then, most people don't dedicate their life to ticking off every pub in the GBG.  Anyway, it didn't look Spoonsie from the outside but that familiar Friday evening gaggle of middle aged noise and much standing around blocking the bar was soon upon me.  The barmaid was a curious creature, very quick to serve me, take my money, subtract 50p for my voucher, she then left my pint ready to top up whilst she went to serve 2 more people.  Surely she'd forgotten about my pint, but she returned with a total "air of the what of it" about 5 minutes later to complete the job!  She's wasted in this role.  Last week, I drank a pint of Broderick's by Daleside in the Cuthbert Broderick in Leeds, and now I was drinking a Daleside Crown in the Crown.  Very suspiciously similar ales too but very good, and better quality here.  A family with a young child (Emily, aged 7 OR 6 who loved her Mum so much she'd got her a "pitcher" - Carlsberg we assume) had just vacated a booth so I was straight in, the locals still happy to stand in the middle of the pub and block the floor space so I felt no guilt!  Emily had dropped two colouring pencils so two elderly chaps came up to me and said "what did we tell you about dropping your pencils you naughty boy!"  'Twas hilarious, even more so when a barman came along to (finally) clean the table and asked if I was using the pencils, but this time with full seriousness.  I joked about not being much of an artist, it was time to find the impossible to find loos (typical Spoons!) and leave.

I had a bit of a wait for the train back to York so did what any normal person would do and whipped in a quick half lurking outside at the Mitre, another pub not in it's best light on a Friday evening.

After a good long sleep, it was Saturday (obviously) and I was back on the tracks for an early start in Burnley's Brun Lea, another Wetherspoons tick for me, though not in the GBG this year and I have certainly had nicer pints of Pendle Witches Brew's in my history of ale drinking - still, it was nice to escape the typical Burnley grey dreary incessant rain and spy on shifty locals out of the window who may or may not have been doing drugs deals with passing cars.

A return trip to Bootleggers (another de-guided pub) reminded Dad that he had been here before.  Just like last time, the barmaid was unresponsive, glued to her mobile phone, there was only one Bank Top ale on this year, and Nigel Pearson's hateful tanned face in large screen on Fletch and Sav with a bit of Glenn Hoddle and Ricky Hatton only added to the sense that here wasn't the best pub in Burnley.  A man with a pushchair and a Farmfoods bag came in for 5 quick pints with his mate, it was that kind of place.

A fair walk followed to our "designated" pub of the day, and the signs weren't good as we met Tom in the pouring rain after 12 to find the pub with lights on and not open!

Despite the sign, I had a wee against the wall above, Tom urged us to go to the nearby Brittania (which said 'Freehouse' specialising in McEwans lager!) but patience was key and just as we were about to give up, we heard the happy rustling of keys in a lock. 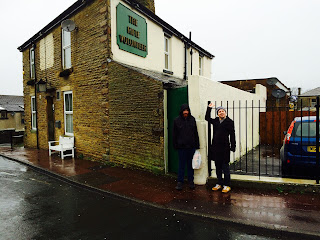 And when the landlady did open (with the kind of disdain for soggy waiting customers that we'd also suffered in Beckwithshaw recently), it was well worth the wait.  You could tell it was classy from the outset, even the urinals were proper old skool, and we took a corner in a fantastic side room and drank some great local ales from Reedley Hallows, especially the Burnley FC themed "No Nay Never".  It looked like things might take a modern turn when landlady said she was "going to put the football on" but this meant the modern day equivalent of Ceefax, so we could happily watch Leicester rack up the goals against Man City.  Tom boosted things by giving us the cheapest bag of mini cheddars ever perhaps (approx 10p a bag, take that Sicklinghall!) and then I discovered Hull City had actually won at Burnley on a Friday night so I did a quiz around that for Tom and Dad, which also entertained the home fans who'd by now come to enjoy this wonderful pub on their doorstep.  Pub of the season contender?  Maybe not quite Nags Head at Loxley but very close.

Well, it was only good etiquette of Hull City to give Burnley 3 points after that, but as Tom and Dad went for the early train, I hung around in the hope of pre-emptive action. 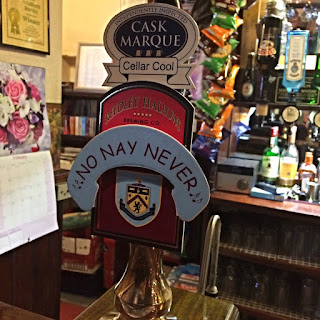 This tiny micropub must be very new because I couldn't even see it on the Micropub website, though I'd identified one called the Beer Shack which was maddeningly closed, so thank goodness for this.  I'd made a bit of a mess finding it so naturally, it was about 3 deep at the bar when I arrived, but the barmaid was one of those totally on the ball "I'll be with you a minute luv after this gentleman" types though one squashy nosed Claret did get served quicker than he should by distracting her with tales of one of the pumps getting stuck.  The ales were ace, Reedley Hallows again plus Hardknott from somewhere near Manchester which I've enjoyed before, so I got a "Brownian Motion" which sounded more like something you'd find in a toilet.  I think the crowd from Knareborough's Crown were here, because despite a very welcoming leather settee, everyone stood up around it rather than on it, so I took my chance and then revealed my Hull City colours in a bid to get a bit of sympathy.  That didn't work but I was just glad to get warmed up out of the freezing Burnley rain which hadn't stopped. 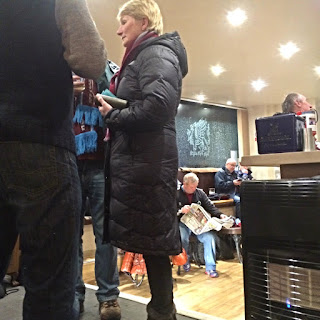 I made the 18:12 back to York, so had a swift half in the York Tap like you do, before Fish & Chips and home.  Despite the defeat and just one GBG tick, a great away day.

And I'm off work Mon-Wed (wahoo) so expect some bonus BRAPping, though my Wednesday planned North Yorkshire day is cancelled because my boiler broke and the man is coming to look at it making "Boilerman" the first BRAPA Crapper of 2016.