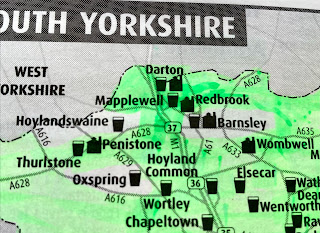 Working from home has provided so many plus points over the last 12 months that I almost missed the one big negative.  I'm no longer within striking distance of those after work GBG pubs in West Yorkshire, South Yorkshire, North Derbyshire, and even Greater Manchester!

Back in the faraway golden past of 2019, I'd simply toddle down to L**ds train station after work and instead of going to Platform 15b, I'd stand on a different platform of my choice (I could even roll a 17 sided dice to decide), rest my weary eyes, and before I knew it, I'd be waking up in Todmorden, Shipley or Dronfield.  Of course I always had a valid ticket!

Nowadays, I have to physically push myself up and away from my cosy flat, get down to York station, and invariably change at LDS to have that same wholesome range of evening pubby options.

And this is what I did on Wednesday night, for my last BRAPA trip as a youthful 41 year old.

I still have a slight 'fear' of the many variables involved in outdoor only pub ticking, and despite the gleaming Sunshine on Leeds (was the a Proclaimers song?), I took triple layers of clothing, gloves, hat, scarf, fluffy hood.  I was sweating by Castleford, though it is the kind of town that makes you sweat regardless.

A student opposite had a clear pencil case containing two Stabilo highlighters, neither of which were green, so I admonished her silently.  Then, a shady bloke who looked like he belonged on a wild camping channel on YouTube stole a phone charger that someone had left behind when he realised it fitted his device.  I admonished him silently too.  I've missed being disappointed by strangers.

Darton was our destination, just north of beautiful Barnsley, where I lived from 1982-1984 when it was very hard for the 4 year old me to get a pint of handpulled and start BRAPA early .....

Long time readers might remember my last trip to Darton was memorable for the reason that I'd left my phone at home, so became the last person in history to buy a disposable camera from Boots for the benefit of blog photos.  It wasn't the most discrete thing, the way it clicked, flashed and whirred.  The results?  Even worse than tonight's uninspiring little collection.
The 27 minute uphill walk to Mapplewell (achievable in nearer 20 mins if you stride it out) was a path I'd trodden twice before.  In 2016, I'd found the Talbot very food orientated but was struck by the old fashioned South Yorkshirey warmth of staff and clientele.  A contrasting atmosphere at the Old Bakery in 2019, a particularly uncaring and in my opinion, pointless, micropub.  What would tonight bring?
With the sun still out, I certainly had a dab on, as they say in these parts, puffing and panting as an old bloke outside the Talbot acknowledged me with a strangled 'now then!' resembling a strangulated hernia.  I carried on around the corner to see the very long pub I failed to photograph properly.  Out of practice you see. 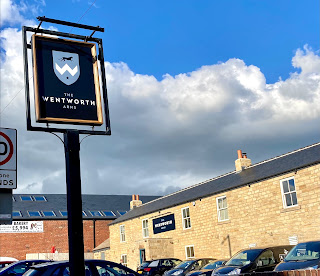 A blackboard outside confirmed exactly why I'd chosen this pub tonight, it looked a very safe bet for being open, available and having plenty of outdoor room ....... 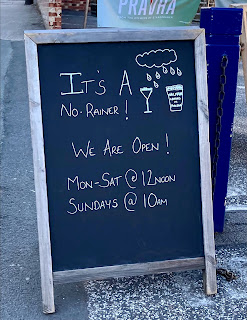 NO-RAINER?   Haha, genius, I've just got it!  Seriously.  So here we are, Wentworth Arms, Mapplewell (1739 / 3168).  My first BRAPA trip of the month,  meaning I've surpassed my May 2020 total (I'm taking the 'wins' where I can at the moment).  A further blackboard instructed me to 'make yourself known to the staff so you can be seated and served'.  But when I pushed the main entrance door and stepped INSIDE the pub, three startled meerkats shooed me away, promising they'd serve me if I found a seat in the garden, eyeing me like I was baby sparrow that had dropped out of the nest head first.   In front of the pub on the gravel, sitting atop what looked like sharp wooden steaks, the average age of the punters was about 70.  They smoked and glanced at me furtively, I tried a smile.  Didn't work.  But as I stepped through the archway onto the carefully manicured lawn, plonking myself on the one remaining picnic bench in the sun, everyone here was nearer 30 years old, eating pizza and drinking craft beer.  Two cosmopolitan young chaps within earshot are bemoaning the lack of wedges on the menu.  Their faves of pre-lockdown apparently.  They opt for skinny fries ("we'll be good and just get one to share" they giggle) before moaning about a bloke they'd met who was just 'VERY Barnsley'.  Get you Mapplewell!  Google Maps had suggested I was actually in a place called Staincross, but no way the folk in this beer garden were going to admit to living anywhere with 'stain' in the name.  I found myself getting anxious re serving (Station Inn, Blaxton flashbacks), but I'm served fairly promptly by a jolly pink haired boy.   'Chinook' is the beer.  'Don't ask what brewery, don't ask what brewery' I'm shouting at myself in my head, and I resist.  A bit of research tells me it is Nailmaker, but had it been Goose Eye or Elland or Mallinsons or unknown, I'm sure I'd have survived.  It is very pleasant anyway, and wielding the green highlighter was incredibly satisfying, on this, my first solo BRAPA outing since 12th April.  A gust of wind blows across us, the sun went in, young Grant McCann instructs his assistant (who didn't look like Cliff Byrne) to order more beers, and goes to the smoking shelter, as more pizzas arrive, and I struggle with my double zip, Arsene Wenger style.  Another pub down, my 67th in South Yorkshire, edging it into 5th place above Derbyshire in the BRAPA 2021 league table. 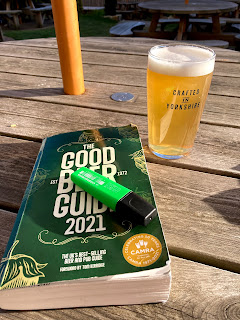 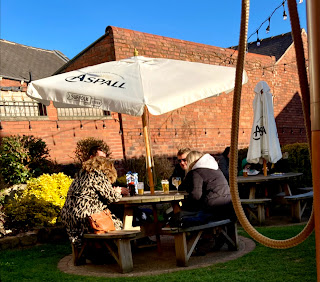 I sauntered back down the hill towards Darton, and such complacency nearly cost me, especially when I realised I was on the wrong platform and there was no footbridge.  But I sprinted round the corner, and soon I was back in York via LDS, home for 20:30.  Job's a good 'un.

And may I add, the most GBG-worthy of the four I've been to since 12th April.

Where next I wonder?  I'm enjoying this little South Yorkshire after work thing suddenly.  I nearly went to Barnsley first thing this morning, but I was feeling a bit fragile after all-day birthday drinks with Sister BRAPA yesterday (in York's wonderful Fox where I've done about 80% of my recent drinking, so not a pub tick, boo). 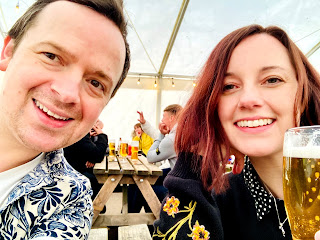 Hatfield and a few around the outskirts of Sheffield (North, West and South) are my other 'open' options, but I get my first Covid vaccine on Monday so depends on side effects, but as the annoying kids says "only nine more schleeps" til pubs open indoor, so I'll definitely be back on it like a car bonnet from 17th and I cannot wait!  Feel like a coiled spring.  Is 12 pints a day do-able?