I'd walked 20.43 miles on Good Friday, it really had been something of a pilgrimage.  And my legs were like lead weights as I signed out of Warrington Travelodge ('the best travelodge in the land' if I'd not mentioned that before) on the Saturday morning.

I should've been pleased as punch with my efforts to date, but sadly an unsatisfactory air hung over me, which wasn't even caused by a Greggs breakfast in the shopping centre shared with fat pigeons. 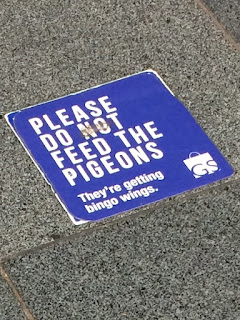 No, the real reason for my malaise was that neither of the two pubs I'd identified as 'key' to BRAPA  had yet been visited and I was on my final day.  These were at Culcheth and Daresbury, both listed under Cheshire, both alphabetically close to the beginning.  Things had to change.

Daresbury opened first and was more 'out on it's own' so that is where I went first, by bus.  By 11:30am, the pub wasn't showing any signs of opening so I heard the Black Country tones of Liquid Len off Twitter on the wind "have you checked Whatpub hours Siiiiii?" it said.  So I did, and sure enough, 12 noon was the new official opening time!

Half an hour to kill then in this chilly wind (colder than yesterday, winter wasn't over yet!) but the good news was that there was at least a point of interest in that Lewis Carroll was buried in the nearby churchyard.  I couldn't see the grave, didn't wanna get accosted by a weird church person demanding money, so I crept around the graveyard like a ghoul, failing to see it.  I did see one for 'Whicker' which am assuming is the Whicker's World chap, and don't you dare look it up and tell me it isn't or you are officially a loser.

I stalked the pub from behind trees, the church bell bonged 12 times, and 2 minutes later (tsk), I heard the loud unbolting of a heavy door and the fittingly named Ring o'Bells was open!  I ran around the corner like the wind ...... 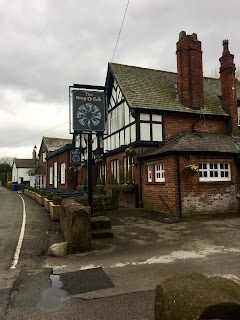 To my dismay, a gaggle of old dears had been hovering by the car park entrance to the right and beat me in!  A BRAPA splinter group here to thwart me again?  Luckily, they were immediately ushered through to the 'sessions room' where they presumably spent the day sampling session ales with John Sessions.  I don't know for sure.  Anyway, the upshot was that sober 'Freddie' Flintoff was polite, we had a brief if stilted weather chat (my fault) and he served me an unsurprisingly bang average beer from Weetwood which the pub could not be blamed for.   'Disappointingly dining' would be my brutal assessment having had too long to build up this particular pub in my mind, though the flooring and 'Marvin's Corner' where I sat at a table filled with old coins did at least give a nod to a proper village pub of old.  I didn't dislike it.  Fun came as it so often does, just before I had to leave, when a young family sat along the bench from me.  Seemed the son (Archie) was a recent convert to real ale, probably just about legal drinking age, and ran over to excitedly tell his younger sister he had a beer called 'Cheshire Cat'.  "Let me smell it then!" she says.  Her assessment "Ugh, smells of wee!" but to be fair to the ale, that could have been residue from the old biddies who'd arrived before me. 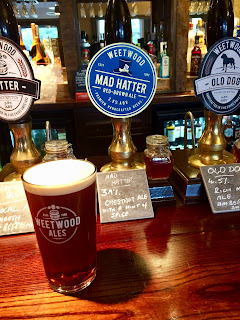 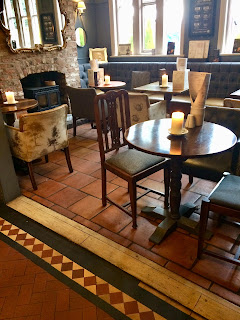 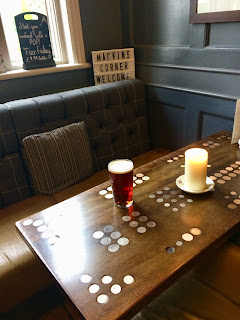 The bus had remarkably arrived AHEAD OF SCHEDULE so I'd panicked, and ran out of the pub like the proverbial jack rabbit.  No time to reminisce on this latest pub experience as the bus crawled back to Warrington as all time legend Pub Curmudgeon had DM'd me about meeting up having seen I was in Daresbury if I just hang on a bit.

'Hang on a bit?'  This is BRAPA, I never sit still for long, I'm like a shark.  Have to keep moving or I'll die.  So I explained where I was going next (Culcheth), my ETA, and how he should feel free to join me if within his boundaries.  "I might as well, gets me out of the house" he replied enthusiastically, which I might use as the new BRAPA tagline.

The 'bus change' went swimmingly, and although the bus driver had to ask me where to stop for the pub (how should I know darl?), I exuded a fake confidence and was soon eyeing it up. 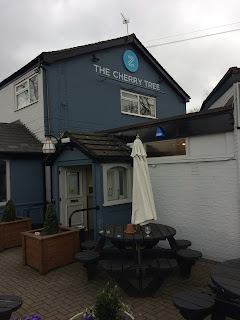 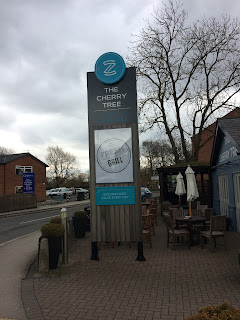 'Sizzling' it said everywhere as I walked into this sweeping large, cheap n cheerful style corner pub, which seemed big on TV sport and 'special offers'.  A friendly barman served me this incredibly nice porter from the always great Kirkstall, but as I scanned the room, there was no-one remotely in the Mudgie mould.  Most were drinking tall fizzy drinks and gurning over large images of Wilfred Zaha, not two things I'd expect of the man.  I wandered up a few stairs to the left of the pub because there was a welcoming looking fire, but it was offering zero heat so I snarled at it as it's up there with random piles of logs in terms of pub annoyances that shouldn't matter but do.  Eventually, I saw a Mudgie like figure staring wide-eyed around the pub from the bar, so I went down to introduce myself, possibly the most star struck I've been since I met Travis Burns, but then again, I'm still yet to meet Messrs Crilly, Cooking Lager and 'The Tand' who are very much the Scarlet Vas, Olympia Valance and April-Rose Pengilly of Pub Twitter if I'm to keep this weirdest of Neighbours analogies going for any longer.  I'm writing shite cos not too much to say about the pub.  I asked Mudgie what he was drinking.  "Half a Tetleys of course" amongst the first words he spoke (in the pub I mean, not his life .... well, I don't think so anyway).  Poetry.  Anyway, we chatted and he was very easy to talk to, always a great sign, he'd get on great with my Dad I could tell, and even better (self serving) news, he'd come to a couple more pubs with me and was in his car, hurrah!


So, into the Mudgie Mobile and proving the legend he is, he took out an actual 'REAL' map and span it around a bit to work out how to get to the next pub.  Campaign for real maps?  Take note father, none of this irritating Sat Nav nonsense.  His 'playlist' was obviously a highlight, anyone with zero Beatles and tonnes of Roxette in their collection should be considered a PUNK ROCKER, even if long winded 70's rock classics are more his kind of thing.

A mixture of the map and my useless upgrade of a GBG App helped us find our next pub.

Low-ton, lowwwww-ton, potato, potaaarto, still not sure how to pronounce it.  In fact, Mudgie said Daresbury was Dahhhhsbury, well who knew?  I must admit I was so invested in chatting with my BRAPA debutant, my memories of this pub and the next are rather muddled and vague, all I can say is this was definitely an upgrade from Culcheth's Cherry Tree in terms of true cosy pubbiness - certainly the main bar area although there were unheard clankings of knives, forks and metallic sounding children, spilling out of their parents clutches and threatening to spill over into Twildery which no one wanted.  The piped music (particularly at the start of proceedings) was pleasing to the Mudgie ear, it sounded a bit too convenient to me, and I think he'd possibly hooked up his car stereo to the speakers in here, I'd expect nothing less of a #pubman of his stature.  Though when I suggested on Twitter that Twild action was a threat to the music enjoyment, Matthew 'SeeTheLizards' Lawrenson won the day with the superb observation "if it's Mudgie's music, the twild will be of drinking age by the time the song finishes".  Ohhhh, you gotta hand to him.  Nice pub this, shame I can't recall more detail! 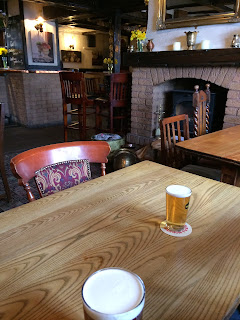 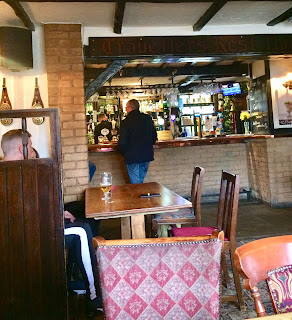 Back to the Mudgie-mobile then and where to next?  Well, you'll have til tomorrow for that one, plus a scary incident in Wigan - which probably goes without saying!