Just to re-cap from my previous blog, it was mid afternoon last Saturday and I'd just 'enjoyed' a productive first three pubs of the day, one in Sandbach and two in Winsford.

The fact that I'd enjoyed the Wetherspoons more than the micropub or euro style bar was not a cause for concern.

Now, it was time for today's 'key' pub, or cricket club to be precise, in Davenham, which alphabetically is next in line in the GBG after recent Culcheth and Daresbury ticks.  Davenham is a 4pm opener, so I kind of had to plan the whole day around it to reach this point.

On the bus out of Winsford, I asked the typically arrogant bus driver (why aren't they generally a nicer breed of person?) for a return to DAV-enham.  "DAVE-nham?" he replies.  But then, during the awkward silence as I search for the elusive ten pence piece to make up the exact change, he comments "I don't think there's a right or wrong way of saying it!" SO WHY CORRECT ME THEN DICKHEAD?

It was approx 3:45pm when I saw the edge of the cricket pitch, and walked along the boundary rope where I saw a chap coming out of a building that probably contained a bar, with a bucket.  He looked at me in a confused manner.  "Are you open?  Or opening at 4?" I asked him.  But he told me they had a beer festival on today so are opening at 6pm!"  And he walked out onto the cricket pitch with a roller before I could really process this body blow. 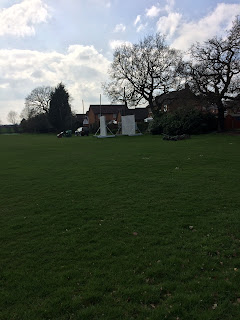 After all, wouldn't you think a beer festival would mean 'extended' opening hours, and not more limited ones?  I learnt after the event that the cricket season is starting next week, where opening hours often are extended.  I could've timed it better.  I also discovered there facebook page, and on the following day, they announced they were opening at 3pm as there was still festival ale to be drunk!  Talk about rubbing it in.  I'll be back, STILL unaware how to pronounce it! 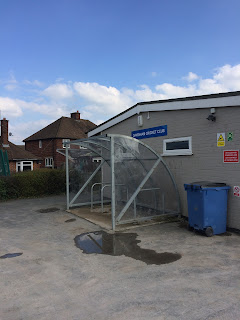 All I could do was head back to Northwich, home of my debut Wetherspoons experience back in 2001.  The original plan had been to get out to the Salt Barge at Marston, a short walk north of the centre, but now I was 'one pub down', I decided to get straight back up the train line where Knutsford and Mobberley were en route back to Manchester.

Knutsford for me is everything that is bad about Cheshire.  A little poncy narrow streeted pretentious hellhole of boutiques, crafty craft shops and artisan cafes with French names.   And when I reached the pub (Tap & Bottle) after much dodging of wheelchairs, walking sticks, buggys and tiny handbag sized dogs, it was only bloody CLOSED!


I went into the lame looking Angel@KingStreet opposite to find out the truth, getting a rather limp half of Holt's Bitter in the process.  People were queuing at the bar for no reason, so I joined the old man down below, who had the filthiest hands and spent ages faffing with his change.  Blood was boiling by now.

The barmaids were lovely, and the one who'd rolled her eyes with me over the change faffing, seemed the best one to ask about the Tap & Bottles.  "Rick has sold up and left, but Mobberley Brewery are reopening in next couple of months..... yayyyyy.  Mega Lolz!" she squeaked.  (She didn't actually say mega lolz, but it was heavily implied).  Her enthusiasm on the future of this pub didn't chime with BRAPA.

As I sat down opposite two posey lads with my desultory half of bitter, putting a black cross through the GBG entry was the only satisfying moment of my time here.


Under normal BRAPA Saturday circs, I'd have definitely given the Bull's Head at Mobberley a go next.  But I needed to be back in L**ds to watch a Pearl Jam tribute band for 8:30pm and time was ticking on, the pub being a 33 minute walk from Mobberley station.

But there was somewhere else on the train line with a nearby pub I'd not been to before, this one being across the imaginary border in Greater Manchester.

Heaton Chapel was no Knutsford, a bit of a grade A shitehole from what I could make out.  On the long grim road down to the pub, every property was either boarded up, defaced with rubbish graffiti, had shutters down, or two of the three!

Thank goodness then I avoided an unwanted hat-trick and the pub was open.  Reminiscent of the No. 4 Bar in Winsford (which now seemed like a VERY long time ago!), people were basking outside in the spring warmth (but not trusting the weather enough not to wear plenty of layers!) which always makes the outdoor photo a bit more awkward.

I battled my way through the massive into the postage stamp of a square box room, really putting the 'micro' into micropub.  Getting served was a trauma, to my right there were some young 'flakes who seemed insistent on forming a queue, which just minimised the available space further.  Just as I was wondering how improper it'd be to make a beeline for the left hand side of the bar counter, a shaved head bloke did just that, and I cursed my slowness.  In the middle, I still got served before the idiotic queue of three despite encouraging them to go first as they'd been stood there longer.  I was served by a classic P.I.S.S. barmaid, which I believe the kids refer to as R.B.F. (Resting Bitch Face) in this day and age.  I later heard a man ask her if she was feeling any better?, she snapped "NO!" so I'll give her the benefit of the doubt if she was ill.  There was no space inside, so I joined the 'massive' outside, and got two F.C. United blokes to shuffle across a bench (actually a flimsy piece of plywood supported by beer barrels).  Listening to their conversations didn't brighten my mood, calling the championship 'division one' like they were lost in 1993 Endsleigh vintage.  Funny are F.C. Utd fans, managing to somehow combine supporting a shit team with pure arrogance.  A special combination.  Neither was my mood helped by being able to see this grand old Greene King pub across the road.  Why wasn't this in the GBG instead?  Well, 'beer' obviously but you know what I mean don't you?  A little bulldog ended up under my part of the bench, licking the back of my knee (people pay for that sort of thing in Burnley) and I was about to put it forward as a 'BRAPA pet of the year' contender, when the owner declared himself a L**ds United fan.  Automatic disqualification, sorry doggie.  A wanker then whistled to a wankee he knew across the street, stopping the entire conversation in the pub, which he was mildly abused for.  Then our PISS barmaid returned, and stroked the L**ds dog, I wasn't going to win in this place.  Difficult circs, and a mood already blackened by earlier events!

So, the day had started well and not finished well at all.  As Russ commented in the errrm comments section (obviously), it is becoming a theme like me not knowing my its from it's, after the Ely debacle recently!!

But on the slight plus side, though I need a return trip to Davenham (in the cricket season, so can I expect an early opening if a home fixture?), it can be combined with Marston, Mobberley and a pre-emptive that nice fellow in Sandbach gave me, which is the Salty Dog in Northwich (which I'll do if time allows),  with something Mancy to finish of the day.  And that can be done in late May some time.

Looked at the CAMRA website the other day.  I should've done it sooner.  On 10th April (4 days before my visit), it had been reported Tap & Bottle in Knutsford closed.  Silly me!  But in the same update, Royal Oak in Runcorn is also de-guided due to change of licensee.  That reason doesn't always mean I'll cross it off, but considering they didn't open as advertised over Easter when I walked all that way, I'm binning it off.

So the end is nigh for Cheshire, and I can't say I'll be too sad to have finished this hit & miss county.

'Proper Pearl Jam' were great though, playing in the Grove, one of L**ds best pubs, to make the experience all the better and make up for an annoying afternoon. 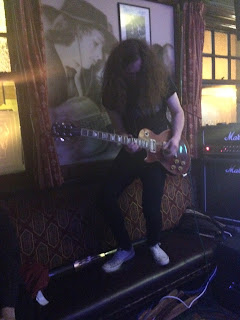 I did TEN new pubs during Manchester Punk Festival (I didn't see ten bands, priorities you see!), which I'll write about in three blogs coming soon.