So, back in Buckinghamshire for the penultimate time for a good decade or so (hopefully) and it there was a glitch before we'd even reached 7am as I noticed my 7:01am train was only going as far as Peterborough.  This was due to overnight train chaos at Hornsey (not to be confused with the far superior Hornsea, of pottery fame).

The silver lining to this cloud was that I'd have had a ridiculous amount of waiting time at Euston had everything gone clockwork, now I just had 20 mins or so.  I caught a little electric whirry train, smooth as a baby's bum, and soon we (I) was in Cheddington for the second time in my life.  Once is enough for anyone, but needs must.

As the crow flies, it was a mere 1.4 miles to the village of Mentmore.  Reality of course, a crazy scary road with no pavement, just an uneven grass verge and lots of drivers you wouldn't want to trust your life with, so as soon as I saw a pedestrian waymark, I bolted into the edge of a farmers field.

With sodden muddy shoes, damaged crops, and an urge for a number two, I soon realised I wasn't following the intended path.  After wandering into a farm I wasn't supposed to (again), I saw a gate and hurdled it.  Before too long, I was in Mentmore, the pub being the first building I saw.

Now the nerves started, I'd read about Martin's aborted attempt here.  11:40am, would they open at 12?  A light on was a promising sign (the first Bernard 'Daddy' Everitt rule of 'will a pub open?') so I loitered on the village green with playground, feeling half Midsomer Murderer, half Paedo, so phoned Mum to do our Hull City score predictions.  I said 1-0 win, as we were home to rubbish Reading.
I then gave her 'real time' is the pub open yet commentary as it was now 12 noon exactly.  It was! 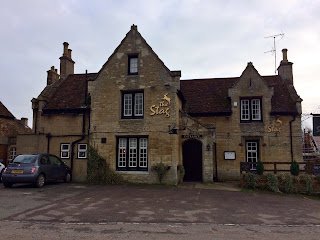 This was always going to be unashamedly dining, and factoring in the Bucks factor, my expectations have rarely been lower!  So I was amazed when the matronly matron and young bar lad greeted me with the kind of gusto you'd expect to be afforded to the first customer of the day, but rarely is.  Just by saying 'I'll have a pint of Glorious English' (the most exciting of the two ales on), the matron laughed uproariously.  The pub has three rooms so I sat in the most 'traditional' (everything is relative), 'Froggies' bar with it's real fire, beermats on tables (a rural Bucks rarity)  and wall displays to give a nod to things like dominoes and pool, as though they were something people once played in this pub but it had died out when it was gastro-ised.  If it was trying to be a 'pubby' room, it failed hopelessly, but the thought was there, not everyone wants a restaurant or cocktail bar (the other two rooms).   The pub had recently been taken over, so I think I was benefiting from the "trying to make a good impression" phase,    so when I asked our young host to order me a taxi (they must've thought I was a mystery shopper or a Twamspector [CAMRA inspector who is also a twat] by now), he did it with good grace, though he told me he had to repeat the 'Aylesbury' bit 5 times as a twog was barking in the background.  "Holding back the Tears" was playing, as I was "holding back the beers", nursing the last few sips as I waited for the taxi as I didn't want to order an extra half.  "Your taxi is here sir" I was told, and I went on my way.  One of the nicer Bucks Dining Hell Experiences.  Yet if I encountered this place in Rochdale, I'd probably be fuming.  Funny old game innit? 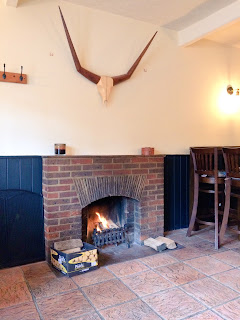 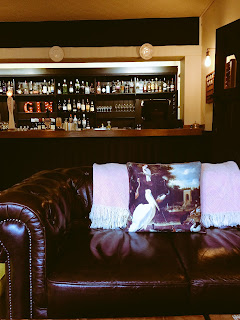 My taxi driver was called Lee, and the most "Lee" Lee ever, proper excitable southern young man, actually a Leighton Buzzard beer delivery driver who'd hot wired a taxi (probably) and proceeded to slag off the staff at the Tan Hill (highest pub in England) and Grassington (he'll be right) but said Whitby was lovely.  We had a good pubby chat and when we saw a visiting chav family going into Aylesbury prison to see 'Daddy', we both judged them silently.

He dropped me at Aylesbury (another place I'm happy not to go back to for eternity) from where I caught a quick train to Stoke Mandeville, favourite haunt of Jimmy Savile, which explained the dearth of twild action in the next pub, the only good thing about it.  Had Savile taken up a healthier past time like pub ticking, I suspect he'd have gone to the Bull, said "now then, now then, not a lot going on 'ere young man" (or is that Brian Clough?) supped up, and gone onto the next pub never to darken the town again.

And the lesson here is simple, pub ticking is a great healthy hobby. 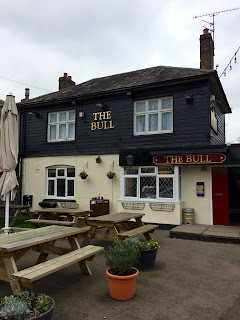 After a desperate dash to the loo in the corridor gave me chance to decide where I'd sit, I chose 'bar' ahead of 'lounge' cos I'd seen 4 blokes stood at the bar and thought they might be amusing.  They weren't.  I wandered in to bewildered looks, and the barmaid admitted (just as in Northallerton last night) that she'd not seen me at first.  Still, this one was particularly gormless.  I didn't think the beer choice could get much worse than Mentmore, but Harveys Sussex Best or Doom Bar didn't inspire.  To be fair, I chose the Sussex and it was good quality.  A sign said "No Food, No Vapour Cigs" and a nervous man called Andy left as soon as I'd taken the obligatory 'shot of the locals'.  A larger than life character with an eye patch that looked like a golf ball behind his specs (it looked ridiculous to be honest) shouted through to the three remaining blokes on my side.  "Tell him he can't come round this side!" they pleaded to the barmaid, and sadly, he never did properly appear in the flesh.  My beer was served in an Adnams glass (the WORST), on a Stella beermat, and it was in general quite a miserable pub experience.  The best I can say is "ONLY ONE BUCKS PUB LEFT TO DO!"

It was time to head back to London, and although I don't bang on about it in quite the same way as trying to complete Bucks and Cheshire before the 2019 GBG comes out, I was only 11 pubs away from finishing Central London for a first time.  It'd be nice to feel I'd got this one under my belt for a decade or two as well, so that is where I headed next.

Changing at Marylebone, I took the tube to Charing Cross and after getting lost around Trafalgar Square for not the first time, I spied a pub I'd tried to get in at 10am on a cold January morning last year, only to find it sadly closed, but better luck mid afternoon on a Saturday ...... 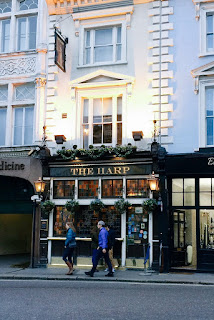 This was one of those "everybody has done this pub apart from me and they aren't even pub tickers, you should be ashamed it's taken you so long Si" kind of pubs I occasionally have the joy of going to.  And I could see what the fuss was about from the second I walked through the door.  Despite the fact this was a tiny pub heaving with masses of bodies, there was a BRAPA shaped hole at the bar right in front of the interesting wide array of handpumps (I went for a Thornbridge just cos hardly ever see it in London) for me to be served by a smiling bald man.  The other staff smiled too, they laughed and joked.  Do they not realise bar staff in Central London have to be shit, miserable and incompetent?  What was this witchcraft?  It got better.  Another BRAPA shaped hole appeared just behind me, allowing me and my bag enough room to comfortably perch.  Sitting would almost feel wrong in here, and I NEVER say that.  I even did a bit of classic man-spreading with my elbows to just give me a little bit more room than I was entitled to.  The good thing about pub goers in the middle of t'Smoke is they are all idiots, so none of them understand bar etiquette, pub etiquette, and all just motored on down to the even busier back of the pub like they were expecting to find a Narnia style vortex they could sit and drink in.  Promise of additional seating areas in London are not worth seeking out, you'll only be disappointed.  This all left the front of the pub relatively comfy, even if a 18th century portrait of a judgey Keeley Hawes kept staring at me.  Couldn't get a proper photo of her cos 'Mark Monk (Mark Robins v Gary Monk) Accountant' kept blocking me.  I also loved the stained glass and array of pump clip decor, this was a pub you could just 'look' at!   They did do food, but it looked reassuringly basic.  What the hell is a sausage on a stick?  A sausage on a stick, oh right?!  A blonde girl and her muscly boyfriend tried to invade my space, and all I could think was that little mole on her arm could easily be vaporised by a Harrogate skin clinic.  It really was that kind of an intimate pub.


So after two pretty lame Bucks pubs, I was awake and buzzing and positive again.  Only 3pm too.  Plenty more to get done before the train home.  Could they all be as good as the Harp?  Would anything else annoy me today in London?  Surely not!   Stay tuned for part two tomorrow.