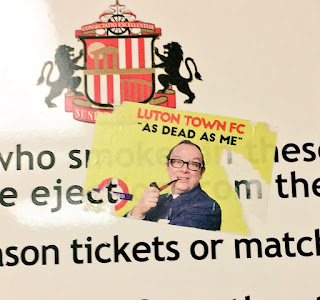 When me, the lovely Dad and the mysterious bearded figure of Tom Irvin arrived in Brockley Whins on a cold Saturday morning, we had at least 40 minutes to reach our first pub in West Boldon, only 1.1 miles away (as the crow flies). 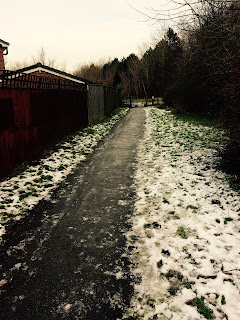 What crows don't have to worry about are icy uphill footpaths, and at one point we found ourselves actually slipping back where we'd come from.  Angry barking twogs didn't help, but we were still at our first pub for 10:40am. 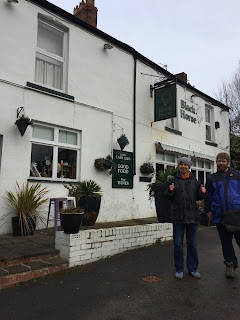 A light was on and in an exciting turn up for the books, the door was very much open!  Better have look, but despite staff standing behind the bar, they barked at us that they weren't open til 11.  BRAPA pet hate - why open doors if you are not officially open?  As soon as that door is unbolted, the customer should be entitled to be allowed in for a drink.

So we stood and ate malt loaf and cheese (Tom called me a 'bastard' for eating malt loaf, perhaps the first time this has happened in my 38 years on the planet) but we passed the time and Dad educated on a latin named tree to try and recreate the spirit of Freemantle in April. 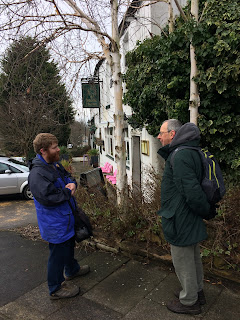 11am on the dot and we were back inside, this time to stay (for 35 minutes anyway).  I assumed what with the colliery-tastic part of the world we were in combined with being first customers of the day, we'd receive a warm welcome but the barman was as much a miserable lame duck as the Jennings Cumberland (SBS C) he served us (Camerons Strongarm was the other option I should've favoured) and other staff came and went without so much as a glance in our direction.  How could a traditional village pub with roaring fire, random hats hanging from the ceiling and nice proper carpets feel so chilly?  It's people innit?!  The signs were there before we entered, quite literally, with a "no tracksuits or football shirts" notice in the window, which could've caused the first ever BRAPA 'barring' as I had my Hull City top on!  Perhaps due to our quality of football, it isn't recognised as a football shirt anymore, for I got away with it which I was almost sad about.  Some OTT food options scrawled in Tip-Ex on a perfectly innocent mirror suggested a pub with a silver spoon up it's arse, dying for a more upmarket clientele than was realistic.  Disappointing. 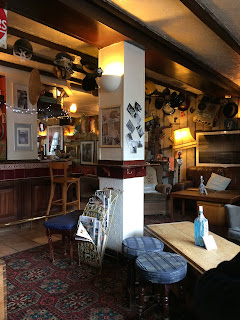 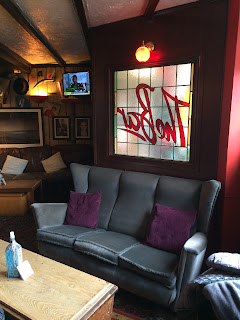 A long straight 15-20 minute walk took us east of West Boldon, to the unimaginatively named East Boldon.  We'd done a Black Horse, the next was Grey, so imagine my confusion when in the distance,  I saw a huge black horse sign on a building (if I was Lloyds Bank, I'd sue), and then a white one!  Tom had other gripes, a sign which seemed to suggest East Boldon was the home of the first ever butchers in the world.

Anyway, it was a 'Grey', and a huge building at that. 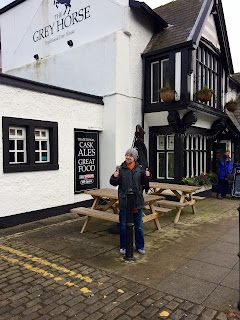 Despite the vastness and unsettling 'Ember' patterned furniture, a friendlier welcome from the barmaid plus some nice ales (I had something called Red Dust from Consett - SBS B+) put this just ahead of the Black Horse, though it lacked the soul to thoroughly convince.  I was getting the impression that Boldon as an area thought it was a bit special, not an attitude you get in Sunderland or Newcastle, so was a bit like a mini republic that's forgotten it's coaly roots.  We chatted on random stuff, including former Hull City keeper turned plumber Steve Wilson, who had the chant "Bransholme's Number One" and I noted how to this day, no-one knows anyone else who's come from Bransholme and don't anything, either in the sporting or plumbing arena!  Hold that thought for later.  The only real pub drama came on the way out.  I was coming back from the loo, but was blocked from getting to my seat by a frail dithering old man with a stick.  When I finally saw me behind him, he looked so scared I thought he was gonna drop dead on the spot!  He regained his composure to tell me that as a Geordie, he hoped we'd win today.  If he didn't survive the night, this blog is dedicated to his memory.


We took the Metro one stop past Sunderland to Park Lane and Tom delighted in telling us we were breaking the law.  Firstly, we hadn't been allowed a 'break of journey' at Brockley Whins, and because our ticket was only to Sunderland, we were breaching the rules again.  Tom hoped a ticket inspector was waiting at Park Lane to 'grip' us and throw us in prison, but he or she wasn't.

It was nice to be back in Sun'lan, walking down streets I recognised as a student here.  I wondered if I'd been in this pub as it was here in my day (1997-2000) but don't think I did despite some vouchers in my 'Freshers' pack. 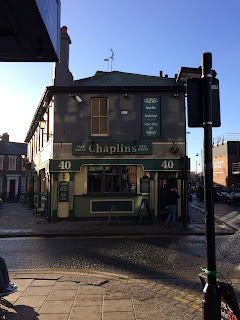 No matter whether the crowd of the Stadium of Light is 800 or 80,000, you can bet every single city centre pub will be packed on a match day, and this was no exception.  It was a huge maze of a pub, and was my round (Dad's steamed up glasses meant I had to choose him a beer!)  An impressively switched on barman who gave me a loyalty card which I later lost (no one as disloyal to a specific pub as a pub ticker!) gave me some Jennings Cockerhoop  as I seem to be a Jennings slave at the moment.  Plenty of beers on in good nick, but this was a Marstons House, and even by their beery standards, the options were not the most thrilling.  A crazy bald dude was worried he'd pushed in front of me so we got talking, he told me he was a plastic Liverpool fan despite the Mackem accent and he had to cancel his order cos his mates wanted to go elsewhere.  He told me he once dated a girl from Hull .... "she was from Bransholme and she was a nutter!" was his parting shot, so spooky after the recent Steve Wilson chat.  Chances of a Bransholme mention here must've been a million to one!  Dad had located my good friend and Sunderland season ticket holder John Watson so we sat (well I had to kneel on the carpet for 90% of my time here!) and his parents Ken & Margaret joined us for a great pre-match session, in the shadow of Brighton huffing and puffing to no avail against Chelsea.  Time for one more (Bombardier), but Dad wanted coffee so back to the bar me and John went.  After a quick debate, the staff decided they were too busy to do a coffee - a slightly bizarre decision as it looked like putting an empty cup under a machine and pressing a button!  Oh well, I still quite enjoyed this pub as I tore myself away for the Metro to St Peters.


So, that was all very nice.  Find out in part two tomorrow if Hull City could raise themselves from the recent awful form again a Sunderland club who, as John and parents would have us believe, are worse than us (spoiler alert - clue is in title of this blog)?  And what of post-match?  Could I find more BRAPA pubs, and perhaps a classic?  Stay tuned!