The family, that is myself, Mother BRAPA, Daddy Chauffeur BRAPA and even Sister BRAPA (not a nun) travelled down to Great Yarmouth for Uncle Roger's funeral on Tuesday evening, arriving at 9:30pm.

Of course, I'd researched late night BRAPA potential with three pubs in the GBG.  I must admit that in Good Beer Guide terms, Norfolk is one of the things beginning with an N which I give zero shits about, like Northamptonshire, Northumberland and Nottinghamshire.  Ask me again in 2029.

Nevertheless, a chance to go to the appropriately named Tombstone Saloon for last orders/rites sounded almost perfect, until Mother BRAPA looked up at me with sad eyes and said "you won't go off late night gallivanting on your own, you WILL stay and have a drink with us won't you?"  How could I say no?

After all, perhaps the pub built onto our Premier Inn would be pre-emptive?  We checked in, Sister BRAPA dawdled, but we were in by 10pm after the obligatory photo op ..... 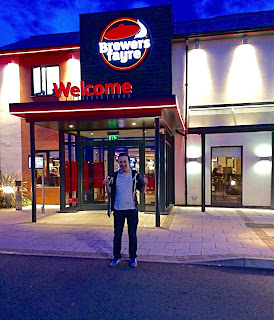 So we wandered in to the sad sight of both handpumps turned around.  I'd researched it, and it was supposed to be Sharp's Doom Bar or Adnams Southwold, better than a kick in the balls I thought, (probably).  In the absence of ale, Sister BRAPA made the wise call to survey the fridge for bottles but the personable young yokel behind the bar told us the fridge was broken so everything was warm.  I still went for a child sized can of Dead Pony Club made with loving care by those paragons of virtue up at Brewdog.  Dad hit the San Miguel like an England World Cup fan abroad, after asking me which lager I thought would be best out of this and Becks Vier, and Sister and Mother BRAPA gave up all together and smashed the wine like Keith Floyd on holiday.  We ordered 4 bowls of chips and before we'd barely sat on the 'menu-stacked' corner table, they were with us!  Frozen oven chips probably out of the microwave, what a delight!  Possibly the worst bowl of chips all of us had had.  I compared one limp chip in the bottom to a foetus, Sister BRAPA couldn't see it, lacking my imagination!  Mother BRAPA found two hairs in her chips, how curly they were she didn't say.  However much vinegar I soaked them in, they remained dry.  Someone popped a balloon and found it hilarious, this was the tail-end of a birthday party and a load of hammered middle aged women went up for last orders.  I'd experimented with 'arf a Guinness but was now on the San Miguel with Dad.  We convinced ourselves it had a "very real" taste, almost like an ale.  I think we were comforting ourselves.  Chatting went well, it had raced on to 11:30pm and any chances of getting last orders in at either of the alleged 'midnight GBG closers' had passed.  Not that I really believed they'd have rung last orders as late as 11:40pm on a Tuesday.  We were asked to leave, almost politely, and the morning breakfast tables were being set up - which I ended up enjoying a lot more than this experience, mainly due to some surprisingly "on form" black pudding.


So, a bit of a pointless review you may think in BRAPA terms, but I think it is worthwhile every so often to remember that there are terrible pubs out there, and when you use the GBG, you start to take quality for granted and it was a good reminder that you (I) shouldn't.  So there!

The day after was the funeral then, a strange mish-mash of a ceremony with Dad's amusing speech and the funky disco music when the coffin disappeared being the highlights.  Oh, and meeting our two long lost cousins Robert & Edward - both live in East Yorkshire, both were semi-impressed with BRAPA, Edward loves ale and especially the Transpennine Crawl and works in a bank like me,   Robert hates real ale and drinks gin and is some kind of arms dealer.  Fascinating times.

The "after party" was at the Imperial Hotel, I spied Greene King IPA a bit too late, a weird American 'crafty keggy' font, I wanted fresh orange juice, but Sister BRAPA swapped it for her Pimms which she didn't like.  I failed to harpoon the strawberry in the bottom, but I nibbled two sausage rolls, good quality.

We passed some Norfolk villages on the way back that have BRAPA pubs - this was painful for me, but back in York for evening and a celebratory bottled ale (Old Hoppy Hen) to toast the Uncle properly. 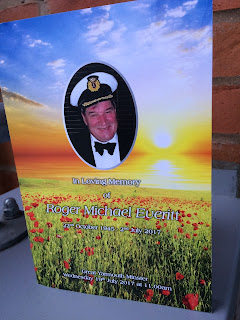