It was quite a late decision to have a bonus pubby day out before Cornwall, but a few things swayed me.  (a) I was totally organised with my packing.  (b) Tuesday is traditionally a BRAPA day.  And (c) I know ticking off a good 5 or 6 pubs each day in Cornwall may be a challenge as I don't think I've located myself very well in Newquay, and a few 'ticks' today would ease the pressure.

The next challenge was finding a little cluster of pubs not too far away which would all be open at lunchtime.  More difficult than you may think, so I was back on the Manchester Metro out to Didsbury for a third (and hopefully final) time.

On the Metro itself, I had both 'old' and 'new' Manchester around me.  Behind me, a posh man with a briefcase spoke loudly into his phone, saying things like "splendid" and "cheerio" to his business colleague.  Compare that to a man in front I'd been keeping my eye on, he stared out of the window at a crow and mumbled 'dirty' before sniffing his rucksack.  I'm not sure which man I was more scared of.

I hopped off at Didsbury Village, and behind some houses, the pub suddenly loomed large in a dark imposing way that only Lancastrian pubs can properly achieve ......

Must admit, my first thought was "Hydes", ugh this is gonna be a bit lame, airy and foody having had not the greatest experiences previously.  But this was different.  A huge sprawling but ultimately pub-tastic building, properly furnished side rooms in every direction and a decent welcome from the slightly bearded host with element of scouse in his accent.  I was the only customer so a bit spoilt for choice as I sat in the front right room, although the pub door was blowing a cold draught in, making me feel like a miserable old git as I smuggled my cheese & onion pasty behind a wall.  This was the only fault though, and I was never going to sit in the rear of the pub which was more dining oriented.  Though like a good twild, kind of "not seen or not heard".  In fact, the only chat I did hear was a 30 second strategy meeting between staff about some new Mini Cheddars that were coming their way.  You'd think they were coming off a cargo vessel from Columbia the way they carried on!  The loos were quite a patterned feast for the eyes in comparison to the rest of the pub, making me wonder whether it had been refurbed from some 80's disco fun bar.  My phone, which I'm starting to suspect is a pubby sentient being (Artificial Intelligence and all that) randomly told me I should go to Knutsford and check out a place called  Dexter & Jones.  I had no intention of it, it's not even in the GBG, silly phone!


I was on the Metro soon enough, where an old lady with a buggy faffed around, sang the baby songs, and generally got in everyone's way.  It was to be a bad omen.

Even I have suspected in the build up that I've been overly harsh on Chorlton-cum-Hardy in the past.  This was my third visit, the first was weird to say the least, the second simply depressing.  Posers, hipsters and pregnant women abound a couple of summers ago, and had now birthed their sprogs but nevertheless, surely I'd overplayed it for comedic effect?

I wandered in and felt like I'd been here before, it felt like "Bar", it felt like "Dulcimer", it felt like "Marble" and it felt like "Parlour".  The barman was particularly disinterested though (one thing I can say about all four of the afore mentioned bars, staff are total sycophants), this dude was like a chestnut haired younger Brad "Drab" Willis who sighed in a "this is inconvenient" way when he realised he had to pull my beer through, as he headbanged to some background shitty rock music that wasn't headbangable in my opinion!  To be fair, he did make eye contact as he handed me my change.  I'd already noticed the crowd, so many young Mums, so many buggies, so many babies, two twilds at the front eating mashed up pizza from crazily coloured plastic plates and knives and forks, it was like a special Mum-Kids Pizza day, but being Chorlton, probably just the norm.  A student looking girl with huge eyes set in desperation sat in the centre of the room, staring blankly at a laptop, wondering why her novella about girls like her meeting bearded hunks in organic supermarkets wasn't taking off.  But then a beardo came to join her, snapping her out of the misery.  Turned out they both worked here, of course they did.  They occasionally exchanged pleasantries with a chef wearing a bandana, usually resulting from whatever crappy piped song was playing now.  He had a shit sleeve arm tattoo, and a fascination with a bowl of potatoes in front of him.  The constant crying of babies was occasionally punctuated by the guffawing of two middle aged blonde ladies outside, one reminded me of Judy Murray with a blonde bob.  Same strained jawline.  I realised I was firmly entrapped, my battered green settee slung so low, there was no getting out.  To my right, a botoxed Nigella Lawson nibbled a bowl of wedges in an aggressive fashion, storing them in her cheeks like a squirrel, or was it the botox, hard to tell.   She tapped on a laptop too, looking every inch the business women but with that Chorlton melancholy "if you can't get a twild, get a laptop".  In most places, women substitute kids for cats or dogs.  Another woman wheeled a huge buggy in, she looked lost for a split second but on hearing babies wailing at the back, a smile of recognition crossed her face and she scooted off to the bowels of the building.  The Pizza Mums at the front loudly debated whether the girl they were thinking of was spelled "Sorcha", "Zorcha" or "Xorcha".  But a twild interrupted so was told "calm yerself mate!" It was time to leave, returning my glass to the bar and saying "thanks" (beer at least had been top quality), normally staff then say "thanks" back (for returning the glass) but our old mate Drab Willis just said "urrrrr, that's ok!" to rile me even more.  I left, at least, with tonnes of blog material but this was quite frankly hell on earth.


It was raining, and I exchanged smiles with a little old lady, I wondered had she lived here all her life.  What was Chorlton like back then?  What did she think of it now?   Then my phone told me it wasn't taking any more photos (was it protesting against Chorlton?) so apologies for lack of pub frontage, you aren't missing much.  They did have a new beer on though ..... 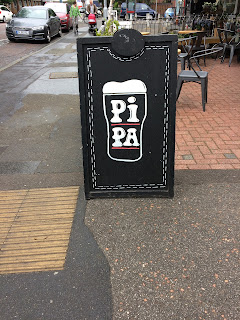 So I took a deep breath, expecting more of the same, but this was small, timid, and almost homely by comparison.  I'd been to a previous Pi, in Altrincham, another place rapidly descending into outer Manc depravity, and that one had felt more Chorlton-esque than this!  This, small and square, the tables and chairs were all uncomfy and rubbish, but I wandered up three steps to the bar and was served some decent local ale by a nervy young barman.  It seemed like he was trying to be all cool, young and hipstery, but he was actually too awkward and dysfunctional to manage it, which kind of made him more endearing - though I don't think he liked me, for when he sat down with his lunchtime pie, he'd glared at me as if it to say "this is my time, don't you dare look at me".  Furthermore, he'd halfheartedly offered me complimentary peanuts on arrival which as an allergy sufferer, I took as a death threat.  I didn't care, the only other customer was an old man who screamed "gay Irish playwright" (well, he didn't actually scream it) and my Mum rang so I had a BRAPA chat and heard how Dad was sad cos him and his mates were watching wonderful Somerset stuffing shitty overrated Yorkshire at Scarborough like they do every year, even if Kevin Shine or Andre Van Troost are doing their accidental declaration bowling, but I digress.   Not much to report otherwise, but won't it be funny if something new for Chorlton gets in 2018 GBG?  "No it won't" is the answer.

Journey back went well, apart from Spanish middle aged women blocking the aisles for no reason , and I ended up on the train that left L**ds for York at 16:17, which is the one I get after work anyway so that worked out ok.

Wish me luck in Cornwall, I might get 'Spoons, I might get Doom Bar, but at least I won't get anywhere like Font, well, I don't think so anyway!!