Catastrophe struck somewhere between Manchester Piccadilly and Stoke-on-Trent when my phone inexplicable broke down ("it is like losing a limb") , leaving me in a state of turmoil.  Working theory : let's blame Stockport  (I had my Good Beer Guide App open, it realised how much I still had to do there, and it simply couldn't cope with the prospect).

Stoke was reassuringly Stoke, grey leaden skies with a biting wind and lots of fat Mum's with multiple buggies & twilds joining us on the bus to Hanley, confusingly Stoke's bus station, which kind of makes Hanley the official Stoke, and Stoke-on-Trent just some random suburb with a railway station and some pubs.  The bus driver sneered at Dad for trying to buy a 'return', a teenager ate a greasy sausage roll in two bites, and everyone else looked thoroughly depressed.

With no way of locating the pubs, I was delighted to spy the first one opposite the bus station on the inappropriately named "Adventure Place", and when Dad said "let's check opening hours", even more amazed to see it open 9:55am!!  Did we dare see if they were serving ale?

Of course we did!  And of course they were, this is no Glasgow Wetherspoons forbidding alcohol pre 11am, this is rugged Stoke, and it felt like luck had evened itself out a bit.  The landlady was an excellent chatty soul, interested what brought us here at this time and told us about how she'd fought and fought to rename this place from The Reardon, as people just thought it was a Snooker Club, but as we know from Darlington last week, there's nothing wrong with that!  The place had a main (superior) lounge bar, and lining the walls, thin restauranty areas, with a snooker table or two hidden behind a 'members only door', it was a cracking place.  And with a perfect pint of Salopian Oracle, I could almost forget about my broken phone, well not quite as me and Dad spent the next hour trying to be phone technicians - shame circumstances weren't different as I couldn't relax!  I saw it all as a sign that I shouldn't attempt an outlandish BRAPA day and stick to the simple Stoke v Hull City option, after all I had a feeling in my bones we were going to play well and win.  And then Tom appeared with Ben Andrew, who fixed my phone immediately!  It just needed a reset.  Oops.  Ben has gone from 2014 BRAPA Crapper of the Year to 2017 N.E. Lincolnshire Spring Regional BRAPA award winner.  Well done Ben.  After a few more pints and some of Tom's "hilarious quizzing" (including "what did the pretty girl on the train say to me?" which we are still guessing I think, the answer wasn't "put it away Tom"), it was time to move on ......


And just when you think all is well with the world, BRAPA kicks you in the knackers again.  Typical.  This time, Hanley's other GBG pub (opens 4pm weekdays but 12 noon weekends so the previous landlady confirmed), looked VERY shut at 12:30pm. 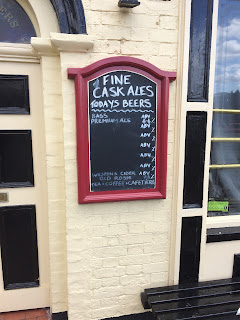 The sign suggested to me that Martin Taylor has taken over the pub, and had kept it shut to force me back to Hanley in the future because he's a sadist, but that is mere speculation on my part.

As it was, a short bus ride back into "Stoke" allowed another smug bus driver chance to tell me "no, we're not going into town, we're going to the railway station" which I bloody knew, idiot.

We popped into The Glebe, which I discovered on my last visit here was an excellent Joule's pub (I fell asleep in one in Chester once) so I had the pale ale which wasn't very pale, but very nice, as Stoke Blokes lined every wall with expressions ranging from mild apprehension to suicidal.  Very much the norm.  It put paid to the theory that this was an 'away fans pub' too ....

Seriously though, a lovely pub and good staff and it got even better on the way back from the loo as, leaning on the same counter as us, just behind me, was Twitter legend Matthew "See the Lizards" Lawrenson, with trademark Paisley shirt and facial hair, with a nonchalant air of a chap who was propping up every pub between Newcastle-under-Lyme and Preston, effortlessly.

We had a good chat and then headed to my former Stoke fave White Star, with it's typically unnecessary doormen and "no away fans policy", we reflected that Stoke is an impossible accent to do, and it's hard to look like a Stoke fan, though I could have squinted and brought prosthetic fingers to stick on each hand.  Anyway, Plum Porter has to be done in Stoke,  as did Iceberg, and we walked to the ground to burn off the ale.

Less said about the next couple of hours the better, and back on the train, I was encouraged (not that I needed it) to get some extra ticks in as one in the day was pretty pathetic.  So Stockport seemed the logical solution!  Tom joined me for moral support but the others went home.

The evening sun was finally out (probably not in Stoke) and the pub I seemed to walking towards was the Armoury. 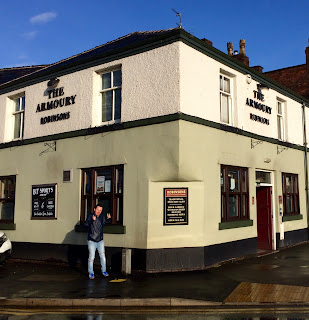 We walked into the left hand side called 'the Vault' cos I imagined something from a horror film, plus we all know in 2017 the left hand side is always the better room unless you are in Dukinfield.  Immediately you could feel that delicious no-frills atmosphere of a multi-roomed Robinson's pub - if I'd been kidnapped and brought here, it'd have been obvious I was in Stockport.  An enthusiastic young bar-babe served me this new 'Game of Thrones' style ale and I wish more young females were more excited by Robinsons Guest Ales.  Though my "it's all boobs and dragons" comment fell on deaf ears.  We settled in the Hatters room but not before Tom had deducted the pub a point for winning a Lancashire darts league rather than a Cheshire one.  Still, he'd lost his voice from too many Marco Silva chants, making him sound very much like a huskier Elly Conway, the alcoholic teacher in Neighbours.  This allowed me chance to listen to the local chatter from the main bar, they seemed to be trying to out-do each other in a 'I've had a rougher upbringing' contest.  Lots of "I was brought up on a council estate" though middle-class oozed out of them, however many pints of Unicorn they might drink out of their flat caps.  The barmaid settled it by commenting "I have a Grandma who lives in the Edgeley" which caused a respectful silence to descend upon the pub, which I didn't understand.  Cracking street corner local. 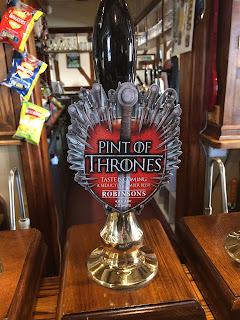 We passed two Chunky Chickens on opposite sides of the road which seemed like overkill, then we went down York Street which led to Tom re-flexing his vocal chords with a rendition of "Are You Boston in Disguise?" before we saw our 'bonus' pub.  It didn't look very open but the good news is it was, you just had to turn the handle!

You know when you walk into a pub and 'Cuddly Toy' by Rochford is playing that it is going to be a good experience, something any #PubMan has learnt over the years.  Another good sign is a chatty Scottish interloper leaning on the bar.  Me having gently reminded Tom that it was his round, I then moaned that I had far too much change weighing me down, so the whole pub ganged up on me and suggested I should perhaps buy the round then - charming!  This was an amazing pub though, only Stockport could produce something even better than Armoury so soon after, it was like a bric-a-brac nick-nack curiousity shop with a pubby smell, so photogenic I didn't know where to point my camera next.  Well, I did, when Stockport's answer to the Easter Bunny appeared bearing carrier bags of chocolate gifts.  Seconds later, Stockport Twitter CAMRA legend John Clarke appeared for a chat and what a jolly nice chap.  I can't repeat some conversations even in THIS blog but it was amusing so trust me, plus I'd drunk a ridiculous amount of ale by this stage but he insisted on buying me a pint, as Tom left to catch a train back to his Lincolnshire slum.  I was hardly gonna say no to a pint with ale of this quality, and spookily, just like when I met Martin Taylor and Quosh, that Squawk beer was on - it should be the official Twitter meeter and greeter ale.  Oh yes, Tom had earlier spotted one negative - the pub had it's Christmas decorations in a box.  "It is halfway to having them up!" he huskily growled a la Miss Conway.  I jogged up a hill and caught a train back to York via Manc at the end of an epic day. 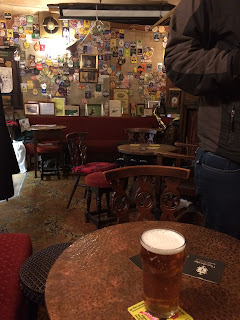 It has been a steady (i.e. unproductive) month so far in BRAPA but from next Saturday, that will all change with a week of extreme pubbing, mainly in central Buckinghamshire, but also with a bit of Derbyshire, Cheshire and Hampshire thrown in for good measure.

For now, I need a break from the ale so will continue with the bookwork to try and identify EVERY GBG pub from previous editions I've spent 27.5 minutes in and drank probably almost certainly a pint.