BRAPA - Darlington - what a place!

What with the rail strike and the prospect of defeat at Man City not particularly enticing, it was always going to be  a case of "keep it as simple as possible today", and with Yorkshire of course complete, it doesn't get any simpler than Darlington (that's not a reflection on it's inhabitants).  7 minute walk to York station from my front door, 30 mins on the train, bing bong, we've arrived!

Myself and Father Bernard (not a priest, more on that later) were joined not only by Tom, but by his Mum (Bernie) and Dad (Chris) for this adventure, still 4 pubs to do despite the fact I've been visiting pubs in Darlo on and off since 1997. 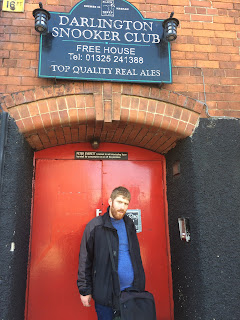 Tom never smiles in photos but his expression said it all as we noticed the door well and truly padlocked on the Snooker Club, and nothing doing around the cobwebby back door where a very dishevelled Christmas tree was receiving it's last rites.  Everything pointed to an 11am opener, it was 11:30am and nothing doing.

This was where Chris Irvin came to the fore and thought that a trip to the steam railway museum could tide us over til after 12, and it was a good move under the circumstances, a quite interesting place, most interesting to me the two model pubs on the model railway: 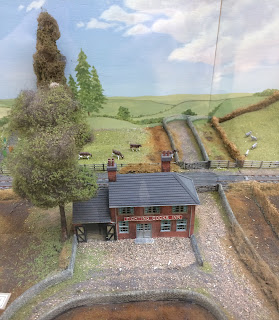 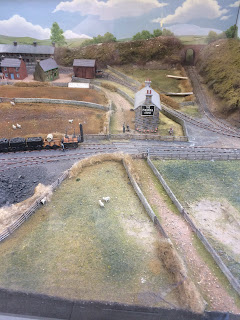 Unable to shrink myself down to visit these two pubs, we returned to where we'd come from and I noticed two lights about the main door were now on.  Closer inspection revealed, yes, it was now open gone 12 noon and we climbed the stairs ...... 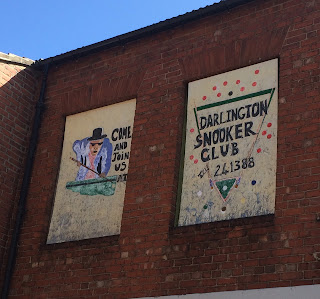 We said hi to a few jolly drinkers raving about some ale from Morpeth, and although I told Chris I wouldn't ask about their opening time, it was about the first thing I did.  Still, the licensee was a Mr Everett so he was almost a BRAPA honorary member and he bit his lip in a guilty manner and kind of admitted that he should have been open at 11am but a lack of customers at that time, plus something about a fortnightly "man in a van" which I didn't understand, meant it was 12 noon.  Anyway, all was forgiven due to the wonderful cheap ales ("We've not put the prices up in ten years"), his obvious pride in being an independent place, and told us about their beer festivals which sounded more enticing than most.  The huge room had 10 full sized snooker tables, though everyone was more concerned with drinking, and we went to this delightfully snug side room where a serious version of Allo Allo was being screened on 'Drama'.  There was a side bar in this room which Mr Everett had bought off eBay, Dad reminisced on his love of Jan Francis (whoever she was)  and Tom's "I got confused between gin and the grand national" was an unlikely contender for quote of the day.  As two Lincoln City fans arrived (a depressingly common recent theme in BRAPA) and Chris flaunted BRAPA rules by ordering a second pint, no wonder Dad made his usual declaration "I could settle here all day!"  For once, I was in agreement but the other pubs were calling.


Just a few minutes walk down the road but on the same side of the ring road was pub two ....

Another jewel in the crown of Darlo's wonderful ale scene, you knew this was a proper old fashioned boozer from the second you walked in, and the expectant landlord listened patiently to my new pound coin woe story from Farnham Royal last week, and then offered to sell me a bag of twenty of them for £30, which I nearly took him up on before the others advised me it made no business sense, well apart from Tom who was trying to convince me he was actually less trustworthy than anyone else.  We then spotted a Bass pump acting more as pub decor than serving a practical use, and we wondered how cruel it would be to take a photo and send it to Martin Taylor, with the caption "this is the best place for it!"  But I wouldn't be so awful.  Of course the pub had outdoor gents, always the sign of a quality place, though the "P" sign confused me greatly.  The pub played some of the most horrific music I'd ever heard, Age UK Radio possibly, and by the time someone called Lynne Anderson had merged into Englebert Humperdink, my ears were practically bleeding and I've never before realised how much the advent of Punk was needed.  And that summed it up. 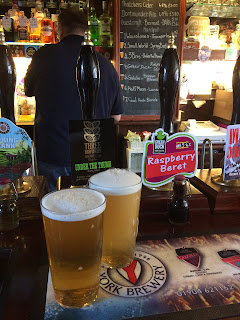 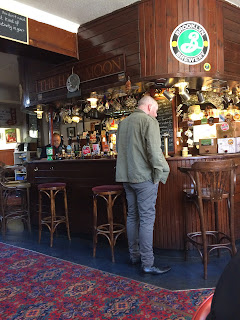 But I think we all knew in our heart of hearts that this was unlikely to be our favourite place of the day, yet cracking quality ale and friendly staff - especially the Spanish-Darlo hybrid lad who asked if Bernie's half was "for a lady".  "Well, it's for my wife!" said Chris, and hey presto, beer was served in this tiny stemmed monstrosity.  Me and Bernie had to explain to Dad that Tapas isn't a food type like a meat or a cheese, more a way of serving it.  Back on a beery note, great to see Rivet Catcher back after Jarrow went bust, shame we had to drink at a posing table but it was probably inevitable, in a room with an additional bar which just sold John Smith's and London Pride.   I went upstairs to the impossible to find Gents and unsure if I'd walk in the right door, I saw 4 identical bearded young men with ankle socks and skinny jeans.  One burped garlic on me, the other chorizo.  I took a deep breath, and a piss, then left.  Funny place.


Out in the street, I realised my phone was definitely broken and although nearby, we were unsure where pub four was.  So we asked the most Darlington-esque local we could find ..... 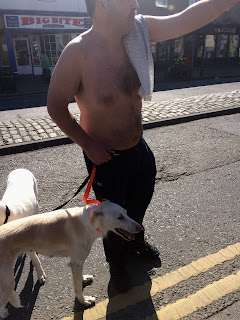 And as you can see, he pointed us in the right direction and after negotiating another mini-subway thing and walking up a ramp, we were in ..... 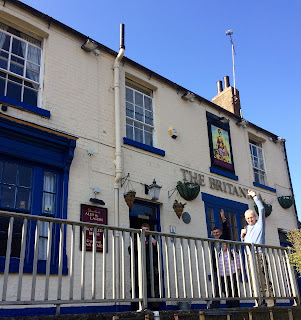 Another one of those where the second you step through the door, you know it's a classic.  Hard to put into words but it won't stop me trying, obviously, the bar was lined with happy "hen" style women, but probably locals, you know, all shoulder tattoos and strappy tops, whilst old men in thick grey raincoats preside over a pint of something fizzy, altering their caps so the world can't see their faces.  The barmaid/landlady was immediately impressive, imagine Yazz if she'd been around in 1977, the white top & pink bra combo is one that York's barmaid's just haven't caught onto yet.  Chris had spied some actual Draught Bass and commented "you don't see it much these days".  Well this led to an impassioned response, to the point where I thought she was going to grab him by the throat and pour the pint down his neck, free of charge.  It made me feel stupid for having ordered anything else (something decent from Wessex)  As it was, she brought our pints to the table, now that is service.  The loo was in a thin corrdior behind the bar, titled Total Washroom Services. No Pistols and Dolls here!    The pub smelt like it hadn't had any fresh air pumped into it since 1st July 2007, it was quite an achievement and left the rare but nostalgic smell you get in pubs like Warrington's Lower Angel and absolutely anything in Leigh or Atherton.  Absolute classic.  On the way out, our barmaid/landlady friend was outside speaking of good ale and proper pubs, barmaid of the year?  You should visit here if you've not already done so. 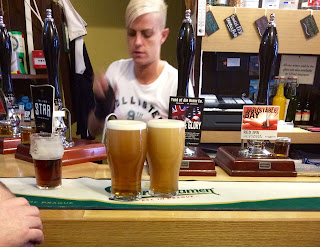 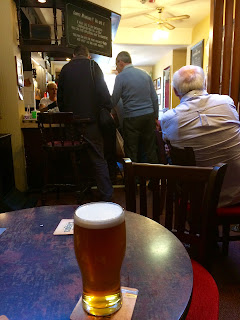 I had enough time before the train to show the gang the Old Vic, a pub which made a lasting impression on me last year and although just time for a half, the landlady's crazy hound was on top barking form, I just can never remember his name cos I've always been drinking!  Anyway, the others loved it too and it has to be said, those Darlington publicans who care about their ale are as passionate as anyone out there it seems, okay so the town might have it's fair share of scroats but it's friendly, cheap and has a certain class about it which you just don't find too often.

On the train journey back, Dad upset a priest for talking too loudly so went to sit with him in his unoccupied bay of four, just to intimidate him.  Classic.

We were due back for tea, so I'm not saying we made a spur of the moment decision to pop into the Golden Ball.  But if we had have done, I'd probably have had to ask York's wonderful pub and premier comminity rip-off merchants to top up my ale on the 80p worth of froth they'd given me, before we'd sit outside and a weird couple would describe in minute detail the perfect omelette they had on a foreign holiday.  Possibly the most boring thing I've ever heard.

But what a great day it was, Dad said it had restored his faith in the GBG producing quality places after Leicester a few weeks ago., and you can't say any fairer than that!