BRAPA - A Tricky Day on Teesside

I was already in a restless mood heading into today's trip, having expected the new 2017 Good Beer Guide to be with me by 10am Saturday morning, but it didn't materialise.  Using the now "out of date" 2016 GBG meant I might be ticking off pubs I didn't need to.  Oh, the mental trauma!

Luckily, I love travelling on the Grand Central and it calmed me down.  It felt so North Eastern, I kind of expected to get a Pease Pudding Stottie + Vaux Samson 20 pence meal deal, shared in the company of a coal miner lecturing me passionately on workers rights.   Train conductor Susan was a canny lass, telling me "lots of people are ganning to Saltburn today, must be the weather!"    She managed to change trains with me, checking it on the local stopper too.

First annoying moment of the day came when the 11:47 X4 bus shot off without me.  At 11:46! After a nice walk on the seafront, I got on the 12:17.  A scary sergeant major hiking chap sat next to me.  I heard a whimpering from his rucksack and the face of a black dog appeared, unable to move from the neck down for the 24 min journey.  Animal cruelty surely, he got off at the same stop in Loftus, I followed him briefly and he unlocked a rusty white door next to an industrial complex, and took the bag in.  Sinister.

SHUT PUB ALERT!  The GBG said 12 noon Saturday opening.  So did Whatpub.  The Facebook page rather unhelpfully claimed "always open".  Yet the sign on the door confirmed my fears, 3pm opening.  On a Saturday?  As that kind West Brom man said on Twitter, business must be good if they can afford to open at 3pm on a Saturday.  CAMRA should implement a rule whereby if a GBG pub changes it's opening hours without notifying CAMRA, it gets de-guided from the next edition.   Fuming, I trudged back to the bus stop to find three equally fuming locals, all throbbing temples and bloodshot eyes, claiming the bus had "gone missing".  23 minutes later, it showed up, 3 mins ahead of when the next one was due anyway.

It was still the cricket season, meaning I had a chance of getting into the GBG listed Saltburn Cricket, Bowls and Tennis Club on a rare Saturday afternoon, providing they had a home fixture.  Inevitably, they were away (to Sedgefield) - I had a feeling it was going to be one of those days......

After a pasty in the sun watching 5 foul-mouthed chavs wrestling with a crate of Fosters, I got a train to Marske and was finally in a pub, after 2pm though!

"Middle House" as the locals call it, this was easily the highlight of the day, and totally sober and therefore observant, I can tell you why.  Big island bar sweeping around pub, superb pint of Flying Herbert from North Yorkshire Brewery served by friendly landlady who seemed to be Susan from the trains again.  The pub was carpetted throughout, with a warming burgundy and tobacco colour scheme which extended into the toilets, surprisingly.  Bench seating all around the pub, not a sniff of food, no music or TV, and the local old men said "alright mate" as I sat fairly close to them, wanting to be at the heart of the pub.   The friendliest/oddest chap was reading a Marske Utd football programme, commenting on a dangerous player who once played for Corby Town!  Having wished the one female in the pub a cheery goodbye (she was heavily tattooed), he then launched into a diatribe about how tattoos make women look common as muck (two faced?) and "look at that Beckham" he said, "he's got 'em all over his face!".  He later tried to look cultured by saying him and the wife were having tagliatelle with a sparkling rose wine for supper, but then let himself down again by telling an incredibly toe curling story about when he nearly got punched for cuddling a man's Muslim wife who he'd watched grow up from a small girl.  It was definitely time to leave, but what a classic pub. 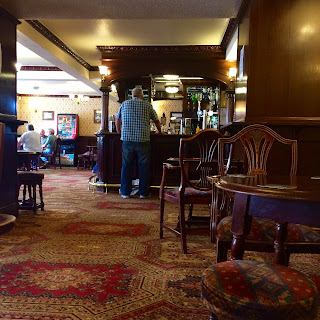 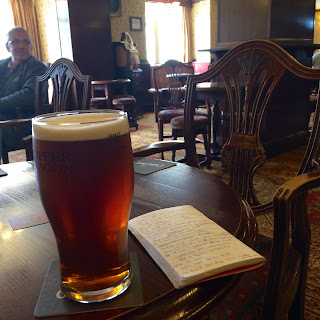 Back on Marske station, I heard a strange noise and peered through a gap in the hedge to see geese, hens and ducks drinking green water from an old paddling pool.  Unique.

Redcar East wasn't far off, but the pub was a good 15 minute trek despite GBG claims it was closer. 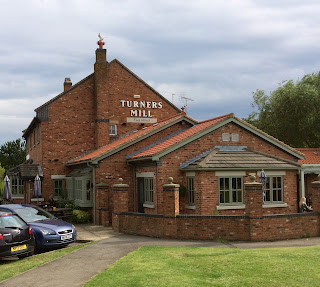 The biggest criticism of the Ember Inn chain is how identikit they are.  But not only that, even the approach to them is depressingly familiar.  Down a busy main road, past modern housing estates, on the outskirts of town, this was Grovesnor, Caversham and the Horse & Jockey, Aylesbury all over again.  The one difference was a racecourse to my left.  "Oh well, an Ember Inn it might be, at least it isn't raceday" I thought.  WRONG!  I entered to find it three deep at the bar as fuckwits in tight grey suits ordered blue WKD and Carling, jostling with silly bints in stupid hats and ridiculous heels looking for Prosecco.  It was a farce as they had two members of staff on (a grey bearded man had apparently chosen the "wrong moment to go on his break") and the scene got increasingly fraught with racegoers complaining and the younger barmaid taking it personally and sulking.  Luckily, two old locals helped the older barmaid judge which customer's were next in line, which stopped a 7 foot tall goon from pushing in front of me,  15 minutes later, I was served.  My beer, when I got it, was cloudy and almost on the turn.  Strangely though, the pub atmosphere wasn't too bad.  Two theories for this.  (a) Ember Inns are so bland, they absorb any 'edge', noise or atmosphere created.  Or (b) York racegoers are such scum, it never occurred to me Redcar's folk may know how to behave.  Your thoughts?  I certainly offended the old chaps in Aldworth's Bell by insinuating any forthcoming Newbury racegoers would be shitbags.  So who knows what the truth is?  Next to me, an absent husband finally returned to his bleary eyed wife.  He'd just nipped out to buy her some Optrex.

After that trauma, I took the train all the way back as far as Eaglescliffe, where the Good Beer Guide 2016 (not to be trusted) told me there were two pubs near both this, and Yarm, stations i.e. within half a mile.  Who writes this bollocks?  The nearest pub was 1.2 miles away "as the crow flies", the other 1.3 miles, and they are just as far if not further from Yarm station.  And from past experience, I bet Yarm's Black Bull is more than 0.5 miles too from the station too.

So I basically had a dash on just to get one pub and get back again, as it was going to be the last train of the night.  (Yarm was a slightly later train but an even further walk).

As I legged it down the main road, a smiley girl I'd seen earlier on a bike decided she wanted to stop and chat about my quick walking speed and what I was up to.  Honestly, the ONE TIME a pretty girl asks me about BRAPA and I'm thinking "stop jabbering on cos time is of the essence, luv" (she slagged off the pub I was heading to but used to be a barmaid at the Black Bull in Yarm).

A homely and bustling main bar room awaited me, one of those where you feel the whole village /place / whatever Eaglescliffe is, has come together.  I squashed in at the bar and a friendly barmaid (Susan from the train and Marske pub for a 4th time today?!) served me a Cameron's Strongarm, which seemed like the kind of beer you should not be downing in 20 mins but never mind.  There was a bit of what we'll call "Swinton Saturday Syndrome" (SSS) going on with blokes blocking the doorway in and out (for the entire duration of my stay), even though  there was much seating available.  One nice feature was ivy (or some creepery plant) hanging from the bar and ceiling (nicer than the usual lazy hops plant decor) though it did seem perilously close to getting caught in one of those ceiling fans.  I could see Hull City on in the far corner, so squinted to see us murdering Man Utd for the first 25 mins (my eyesight is bad) and reflected on how sad it is, in this day and age, that people can't just enjoy watching football in pubs and get excited for the underdog.  Now it is all "YESSSS, I had a tenner on Pogba to take the first throw in", gambling and accumulators.  It is all wrong.  Nice pub though, I thought.

Cos I'd stayed to watch Snodgrass take a freekick on the edge of the area, I only had 18 mins to get back to the station.  The rain (not forecast this morning) was absolutely bouncing it down, I just had my BRAPA t-shirt, and was drenched.  I started running but a frail old lady crossed in front and I had to slow down for fear of killing her with shock or crushing.  Ran over the bridge, the train whistle had sounded, oh no ...... but she held the door!  Phew!  Today could ACTUALLY have been WORSE!

Back in York Tap and still feeling remarkably sober, I enjoyed a pint of Anarachy with a drunk guy from work and his mate - they are doing a Dutch version of BRAPA which means he understands me, but told me I'd never finish the whole guide, which was just want I needed to hear(!)

Oh well, I thought, as long as Hull City hang on for a point and I arrive home to find the 2017 GBG on my doorstep, something good will have been salvaged from a trying day.....

Neither of those things happened.