Sunday dawned bright and sunny in Bwlch-y-Cibau and although Mum decided not to join us (not trusting pub steps, and she can't put any weight on her sprained ankle, though we did try to twist her arm so to speak!), it was a good opportunity to visit two pubs that open 12 noon on weekends but not til after 4pm in the week .....

Before we left, our host, Lady Auriel Linlithgow, brought us some eggs that her chickens had freshly laid but she didn't seem like the kind of girl who'd understand BRAPA so I kept schtum. 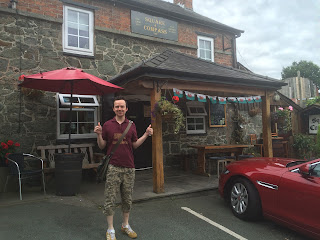 It wasn't far to the practically non-existent hamlet of "Cycle-wild" (as I pronounce it) but the pub was on the main road and the door sprang back at 11:59am to meet one of the jolliest barmen we encountered on our travels.  He certainly loved the BRAPA concept and his equally friendly Brummie wife stood in the background, apologising for still eating her breakfast.  It was one of those funny pubs (like Danby North Yorkshire) where people kept popping in for non pubby reasons culminating in a man with one of those booming Welsh tenor voices who made a show of giving the barmaid a bottle of cheap white wine as a "thanks for last night", sounds like some crazy party had been going on (she pretended to be grateful).  This explained why the Butty Bach was off, with Doom Bar the only ale on and even this had a temporary air lock problem.  At least they apologised, and it was the best Doom Bar I'd possibly ever had! (or was this cos I got zero beer yesterday?)  The pub was small and cosy and very Welsh, lot's of quirky decor including a sign "The lost and thirsty use the Square & Compass, but don't get drunk and cause a...." we couldn't see the last word, the sensible money would be on "rumpus", Dad suggested it might be "elephant".  Whilst a local munched on the longest crusty pork baguette ever seen (with added crackling) I also saw strict rules about not playing the piano and suspect that behind the relaxed jokey facade of this pub, there's one that would come down with an iron fist if you stepped out of line!  As we watched Jessica Ennis-whatsit on a big screen making excuses about not being able to win gold cos she's now a Mum, I realised everyone was drinking Carling.  Carling, Doom Bar but only BBC Sport?  Something was amiss.


Mum might have been down, but she wasn't out.  Demanding constant pub updates and offering her opinions, she suggested any pub that only sells "Doomsday" (as she calls it) doesn't deserve to be in the GBG.  Provocative stuff.

Our next pub was a bit further North, past Welshpool and not far from the border.....

Early signs weren't so promising here as a full car park meant we had to park directly in front of a coach, but the driver told us he wasn't moving til 5pm so we were okay (presuming we didn't go on a 4 hour session).  I entered the incredibly rustic and ancient looking building expecting to find it heaving with tourist scumbags, but it was mercifully peaceful and Salopian Oracle plus a beer called Citrus Blast (and Butty Bach) made for the best ale range we saw all holiday (which doesn't say much for the other pubs, but is understandable in such rural parts).  The young barman was a marvel, and candidate for 'staff of the year' award.  Full of nervous energy, he confessed that the carvery was fully booked up.  I told him we weren't interested in carvery, might just want some plaice and chips in a basket but we'd have a think, but he still kept going on about freeing the carvery up for us!  Arrrggh.  But forgive him, he might not be the man you'd want running the London Stock Exchange but a busy rural pub, his attention to detail was superb and he was constantly asking how we found the beer and coming outside to check we were okay, where Dad had found an outdoor table, overlooking great mountainous scenery in the most calm, still atmosphere on earth, despite a fair few tourists.  Oracle is one of my favourite pale beers ever, so that helped.  The plaice and chips was great too.  This, for both me and Dad, was pub of the weekend and as for our capable host (his exact female equivalent had appeared late on), as Dad said, "he might end up connecting Wales to the internet one day". 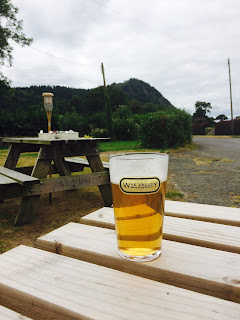 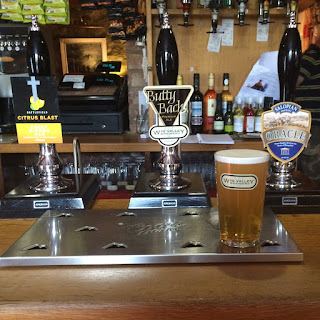 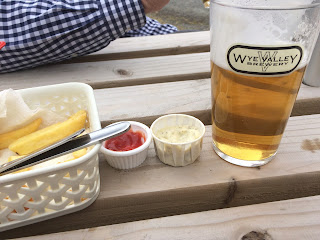 It was time to go back to Bwlch-y-Cibau to check in with Mum, have a rest and gear ourselves up for the most monumental pub tick of the weekend, and about 6:15pm, we set the SatNav to take us the 28 miles to Anchor!

Despite reading Martin Taylor's excellent recent blog review, various comments and stories about the place and it's location, nothing and I mean NOTHING can prepare you for the remoteness, or the unlikely building which houses this pub.  I was in shock, no, stunned, more stunned than Dalian Atkinson (too soon?) and the relief to see it open was immense, with it's "open 7pm every day" sign daubed onto the pub wall.

The pub smelt fusty and like a library book that hasn't been touched in hundred's of years.  Good grief, if Mum found the idea of food unpalatable in Llansillin, then what would she have made of this? (had we had a party of 4)   In fact, I'd half thought of bringing a pot noodle and asking the landlord to pour some hot water in it, just so I could say I'd eaten here).  Anyway, I tried to hide my wide-eyed excitement as I ordered a Clun Pale (and half a Hobson's chaser!) and we chatted with the landlord, a lovely gentle old chap who didn't talk rubbish for the sake of it but was pleased to talk about the pub  (I loved the half-arsed carved owl with glasses above the mantelpiece but my picture was too dark and didn't work out).  Here were some of the many conversational highlights:
1.  The Sunday 12-2 opening slot doesn't exist anymore, further reducing the opening hours.
2.  It had been the Anchor show earlier in the day, probably the only time in the year anything happens in Anchor.
3.  Some Twilds (not his phrase) had been in the night before causing mayhem on the pool table.
4.  In the last 20 years, he can only think of 3 occasions when no-one has come into the pub!
5.  He took a BRAPA card behind the bar and mentioned another chap who'd been doing a similar challenge who was in here a few weeks ago.  "Oooh was he called Martin Taylor?" I asked.  His reply was typically poetic "It's within the realms of possibility that that was his name".
6.  A Polish guy wanted to be at Anchor Boulevard (near Dartford) and somehow ended up here, his friends were not amused when he rang to say where he was.
7.  This pub is "three golf shots" into Shropshire.
8.  It was a Tanners Wines person who campaigned to get this pub in the GBG.
9.  Best of all, a man (probably a Geordie) got Newcastle upon Tyne confused with Newcastle-on-Clun, came in here looking confused, and asked where Boots was!
An amazing old pub with so little done to it over the years, it is ridiculous but that is almost a compliment.  I went to the loo before we left and an 18th century spider was hanging out of a crusty web.  I think the loo had soap though which if you think about it, makes Anchor more progressive than Atherton in Greater Manchester.  £2.50 a pint wasn't bad either.  His wife trotted out a couple of times, she looked older than him and you do have to fear for the future of this place when these two go - but I've been and it was brilliant!

So with a beautiful sunset over South-Mid Wales, it was time to get back for tea and rest up for three more ticks on day three (Monday).