The annual "Welly Summer Day Out" (organised for us Hull City fans who used to frequent Hull's brilliant but now defunct Wellington pub) was down to three attendeees, the usual BRAPA trio of me, Dad and Tom, as we set out for West Bridgford on a sunny Saturday morning.

Like some bloody woman, I was 'wearing in' new red shoes in readiness for the Blackpool Punk Festival, so with blisters aplenty, I ditched the 'wearing in' long walk in favour of  a short bus ride to West Bridgford, a bustling little republic, totally separate from evil Nottingham scum (am sure that's what the locals would say) and we found our 9:30am opener doing good early trade..... 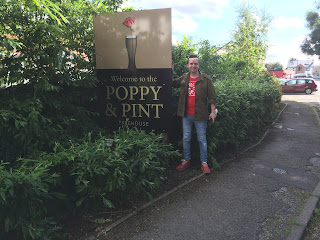 A former British legion club that actually let me in, that was a novelty, eff off Penistone!  Sadly, it felt more like a ski chalet than a rugged men's club, all bare boarded and modern, keen eager young staff unable to comprehend someone might want to order a 10:30am pint without a breakfast.  It was all very Castle Rock (even if I did have a Wadworth beer first, then a brilliant Harvest Pale - a beer that  tastes awful in York these days) but I noticed Dad scowling, he could hear screaming kids dominating the pub!  But rather than walk to the furthest point away from them, he chose to sat in a strange 'no smoking' half uncovered outdoors area overlooking a bowling green.  The Twilds in question (twin twats), were playing hide & seek with a trendy beardie Dad who insisted on emphasising things like "oooh, where have those naughty little rascals gone?" and generally making a prat of himself.  As hiding on the main road wasn't an option, they ended up in our seating area.  Pub kids has been a recent common theme, like Pub Curmudgeon's excellent blog  has unwittingly unleashed a vortex of child shit-baggery on the universe.  Their eventual departure coincided with Tom's arrival (as though Tom was Richard III and they were the Princes in the Tower) and we concluded that whilst this place suffered from not being particularly pubby, there are worse places to enjoy a (now kid-free) pint.

After a short walk, we were at another Castle Rock pub, where I ordered a pint of Andy Turner, which sounded wrong, but he's some Olympian blah blah zzzzz, which somehow led me to encourage Dad to unleash his fake Olympic past, a task he took to a bit too eagerly but the young barman looked impressed anyway.  Andy Turner sounds like the centre back Hull City never had, and led us to a nice little quiz (Dad wanted to sit outside due to man-flu) where the conclusion was that Jozy Altidore is perhaps the worst striker the world has ever seen.  This was a much more proper pub, despite the obvious signs of a sympathetic Castle Rock makeover, and all the men were old smokers called Harold.  An over excitable dog (due to being owned by an over excitable female) took exception to one old man in the smoking area, it absolutely hated him - and don't you love it when dogs react like this and you see the other customers looking at the subject of the dog's wrath with suspicion as if thinking "this guy is probably a paedo"?  In another politically incorrect twist, I asked Dad what pint he wanted.  His reply "I think I'll have a go at the darkie next", reverberating around the pub garden, sounded bad, but really he just wanted to try the superb Titanic Cherry Dark.  And that really summed up the whole pub, and yes, I'd recommend it fully.


It was football time, sadly the safety certificate issue had been sorted out, and we were allowed in, at the extortionate price of £15 having had to get a ticket and then go to the turnstiles in one of the least common sense football moves ever.  It was a good game (for 45 mins), nice Allam Out chants, and our beleaguered players did what we always do and won at the City Ground.

Post match celebration at a Nottingham favourite of mine, the VAT & Fiddle.  Arguably not quite as good a pub since the cat died, Dad accidentally ordered 3 bowls of Carry On Soup (Carrot and Coriander was what he meant to say) and pints of Brian Clough and Red Riding Hood finished me off nicely.

I might be back on Tuesday for some South Yorkshire fun, it depends how organised I am for Blackpool, but I'll be back tomorrow night anyway for the month end review.  Stay tuned folks.