BRAPA - Sheffield (The City That Won't Be Beaten)


It looked like being the evening that I'd finally finish ticking off Sheffield pubs, and it felt like it too.  A microcosm of Sheffield life followed.....

I travelled by "Supertram" (i.e. tram) through the city centre under grey skies like sheets of the local steel, with that incessant drizzly South Yorkshire rain that soaks you to the skin, whilst the wind whispered in my ear like the ghost of Ted Lowe, querying whether I should really be taking on this tricky long red.

The street up to the first pub was typically hilly, so much so it had pedestrian handrails (I didn't use them, that would be an admission of defeat) and I nodded at a student geek who was also following progress on his iPhone.  A kindred spirit?  Half way up, he zapped a Pokemon that looked like Neil Warnock and happily trotted back down the hill.  My pub was of course, inevitably, at the summit.

Out of breath, I ordered a 5% White Rose Alchemy (better than any beer I had in Morecambe, Lancaster or York in the last week), announcing I needed a strong one after that hilly climb.  Immediately, I thought that's probably the boring standard visitors comment in here but luckily the landlord and 'Sheffield Federer' in brilliant blue suit, both approved, the latter commenting it was his usual excuse for drinking in this pub.  A true gent.  Landlord was a superb chap too, managing to make unique conversation with everyone who appeared at the bar, though recommending me a 7% banana keg beer next was pushing it a bit, and I nearly had to give him a BRAPA lecture!  The atmosphere was companionable, relaxed, not at all forced.  Quiet, friendly, just people unwinding after work.  Friends sat together but didn't feel the need to speak to each other.  The pub must be the reason for this, no music or screens or machines, properly traditional - a "classic" you might say if such a term is permitted!  Sheffield has a lot of good pubs, and this is up there (literally) with the cream of the crop. 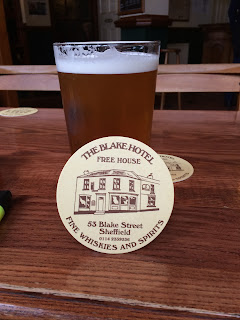 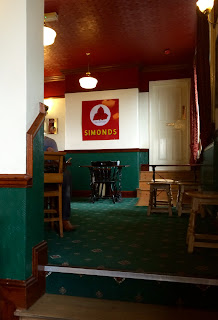 With the sun now out, and a splendid rainbow over the city, it was all downhill from here and I had to trust the grips on my shoes against the slippy streets.  Sadly, it really was downhill as the Wellington was CLOSED!!  Noooo!  Well, this very dishevelled looking building had the old pub sign bearing the name "Cask & Cutler" so I lurked outside to make sure I had the right place.

Eventually, I saw a sign showing some complicated licensee notice I couldn't read properly, and then a little grey haired old man opened the door to tell me they were a month away from re-opening!  He looked like the kind of man you'd see when we finally reach "Pub Armageddon", the kind of man who'd take twisted satisfaction in begrudgingly closing the doors on the final proper pub in the UK.  I hated him more than anyone else in the world.

Turns out that they are finally spending some money on the dilapidated shithole (sorry, historic old pub) and Neepsend brewery (one of those Sheffield pale ale micros) are taking it over (thanks to Beer4John and Brad Wight for their info).

All was not yet lost though as I'd made a worrying discovery last week.  What I'd thought was the Three Tuns (and had reviewed in the archives) was actually the (inferior)Wig & Pen as Three Tuns wasn't open on the day and we'd gone elsewhere.  St John's Hotel, Hull?  Commercial, Slathwaite? Erroneous pub ticking is shameful.  You've gotta be so careful in this BRAPA game. 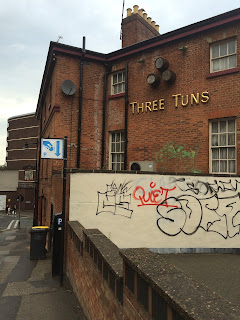 Luckily, the unique shape of this pub means you certainly wouldn't forget a visit.  So much so, it puts Manchester's Peveril of the Peak to shame.  Once inside, you feel your physical being trying to suck itself into a triangular shape like a Mr Man.  Even my liver temporarily became triangular as it tried to handle the peculiar stout from Cardiff's terribly named Hopcraft brewery (the John Smith's glass did NOT help).  The pierced barmaid seemed a friendly lass (nice smile), saw her trying to fathom my "Mischief Brew" t-shirt - check 'em out luv, you look like a cute crusty squatter, great band!  (I didn't say that out loud).  It had a busy town centre feel, so I took myself off to the narrowest room to the right hand side, but this was a mistake as everyone else swiftly left (was it something I said?) and I'd isolated myself, and couldn't get any sense of the atmosphere, so all I could do was occasionally peer back into the main bar with sad eyes.


Just time for one more (pointless) tram ride and a very swift 9 minute half in Sheffield Tap.  I suspect I will be back here in Sheffield when the 2017 GBG is published, but whether or not that will include a FOURTH attempt at the Wellington/Cask & Cutler/Neepsend Brewery Tap (2004 when I first tried to come here!) remains to be seen.  Frankly, it doesn't deserve my custom.


Off to West Bridgford tomorrow, don't wait up!  Si