I'm on a real hot streak with the near impossible county of North Yorkshire at the moment, and was all set for a painful Saturday of busses galore, 'Spoons breakfasts in Ripon, long walks and hanging around in the rain, all for the sake of 3 pubs.

And then, at the 11th hour on Friday evening, something remarkable happened.  Dad chopped half a finger off with a pair of secateurs, and with (potential) heaped on pain of Hull City too much to bear, he opted for a BRAPA car day instead.  It made sense for both of us, everyone in the medical profession knows the only way to grow half a finger back is visiting real ale pubs.

It was a grey, cold and wet morning in York, and after a long drive where Mrs Sat Nav was treated with the contempt she deserves, we were parking in Leyburn at just gone 11am.

Standing tall on the market place, we entered this pub/hotel to find the supposed chaotic scene of bottles of Desparados and Erdinger cluttering the bar - something I wouldn't have even noticed had it not been for cute strawberry blonde barmaid apologising for it.  Despite her southern accent and calling me 'darling' despite being quite young herself, she made a good impression and summed up the pubs whole ethos of smart and well kept, warm and welcoming.  The pub might have had a hideous looking conservatory restaurant attached to the back like a mutant growth, but the bar area was very separate.  As I've said before, thank goodness for Wensleydale brewery breaking the evil Theakstons/Black Sheep empire and the Semer Water was top quality, whilst Dad decided to be well behaved and had a coffee with one of those pointless biscuits.  A bit like in Danby, people kept appearing at the bar to make random requests.  Again, the answer was 'no' to questions like 'do you have croutons?' and 'do you have waterproof jackets?'  Why are people so demanding in pubs these days?  Why can't they just sit down with a pint and accept their lot?  Anyway, I actually felt a little less comfortable as time went on in here, not sure why, but still a good start to the day.

Next stop then was just 1.5 miles north in Bellerby.  Then it struck again.  SHUT PUB ALERT!  Noooo.  The Cross Keys was my 'key' pub of the day, liking of course to do the pubs in some kind of alphabetical preference and just like Beck Hole a year ago, this one is the one creating a blockage.  GBG said 12 noon, Whatpub said 12 noon, but I should really have checked their official website which says 3pm.  I was frustrated, the next pub needed to be good.

And what an old fashioned gem it was!  The GBG talks about 'fathoming out the latch' and it wasn't kidding, ignore the door handle and slide the plate downwards.  Unique, and it all adds to the quirks of the unspoilt centuries old inn.  As do outdoor toilets.  It took me even longer to fathom these out, outside down a little snicket to the left but as one local helpfully advised me, don't go over the bridge!  Did he mean don't wee over the bridge, or don't look for the toilets over the bridge?  I guess we'll never know.  My conclusion is that the harder pub toilets are to find, the better the pub probably is.  Though this may not apply to Wetherspoons.  The tiny beamed low roofed front bar with it's roaring fire was a joy to behold, and  you could forgive me for thinking everyone packing this room to the rafters was a walker or easter holiday visitor.  When it transpired they were all locals who knew each other, it was nice to hear them talking about visitors as though they were amusing little necessities that they just had to deal with.  I put Dad in front on the fire with a pint of Gadd's No 7 from Kent (I felt a bit guilty shunning all the Yorkshire beers but hey ho) so he could rest his finger and slumber, whilst I just looked around the room, smiling like a wide eyed tourist idiot.

I'd recovered from the Bellerby disappointment by now, and we were formulating a plan for a 'replacement' pub, but not before we'd visited the beery hamlet of Masham, home of both Theakston and Black Sheep, ooh don't make me choose!  (seriously, they are both overrated).

Again my 'rule' of approaching the left hand door of this smart, modern Theakstons Brewery Tap was a bad decision.  Dead eyed barflies and food eating toffs filled the room, so I was relieved when Dad found a proper bar to the right where no nonsense drinkers and old dominoes players were trying to recreate a mini Cover Bridge Inn style experience.  We were surprised to see a Theakston Vanilla Stout, even more so to find how delicious it was, though me loudly exclaiming "who thought Theakstons could make a beer this good?" in their brewery tap was hardly going to endear me to the staff.   Another real fire was very welcome, I couldn't believe how cold today was.  Chelsea were thrashing poor woeful Aston Villa in the far corner, and a man had to keep sending his wife/girlfriend to the toilet so he could watch a few minutes of it at a time.  After her third enforced piss, she became suspicious, she offered him chance to sit near us so he could see the screen, but fearing it was a trap and she'd be in a huff all day, he politely declined.  But when Chelsea scored their third, he cracked and seeing us leaving, scooted straight into our seat - something about jumping into graves! 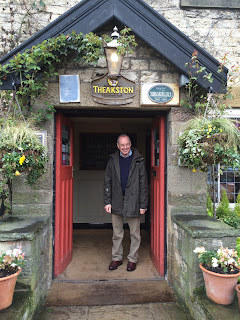 We now had a sense of urgency for our 'replacement/bonus' pub in Lofthouse closes at 3pm (if you can trust the GBG) so had a trek through the most beautiful but remote Nidderdale countryside imaginable.  I say it a lot of my North Yorks trips but seriously, I've rarely been anywhere this remote.  Getting stuck behind a stupid wagon which would not let us pass simply didn't help.

Lofthouse itself was a light stoned pretty village, the pub looked open, hurrah, but something was blocking the entrance!

Hens!  Lots of them.  All stood in the doorway, but delighted to say they were the feathered variety rather than the tanned drunken Geordie variety.   We just had to move them and push on in, though a hungry looking dog was sat on the other side with it's mouth open.  The pub was a welcoming hub of village life, and Clive was the most stereotypical Dales pub landlord you could hope to imagine with his proud beard, beer gut and cheerful demeanour.  He was delighted I could pay him the £6.80 in loose change, and when I told him to check I was right, he said he knew it was £6.80 by the weight of it!  "The sad thing is, he's not even joking" piped up one of the regulars.  The range here was only Theakstons or Black Sheep but I was so high on the wonderful situation, that even a pint of BS tasted like nectar of the gods.  Our decision to buy some cheeselets excited the dog, who temporarily took his mind off the hens, though he wasn't getting anything from us.  With another cosy fire roaring away, and Dad declaring his finger pain free for the first time since the incident, it was certainly true that real ale pubs are the best medicine.

Back in York, we obviously had no alternative to nip into the Fox for a swift half of Osset ale (I once again shunned Plum Porter, what is wrong with me!)  We checked the shock news Hull City had actually won, and providing they don't end up in the playoff final, I'll be looking to finish the Dales area pubs (including Bellerby!) at the end of May.

It was another fantastic day, I'm really starting to believe North Yorks has wonderful pubs after all, I must have just been unlucky in 2014-15 as they mainly seemed a bit lame.  Onwards and upwards to Derby on Tuesday.  See you for a report on that one, Wednesday.